The sun of Shanghai and Türkiye 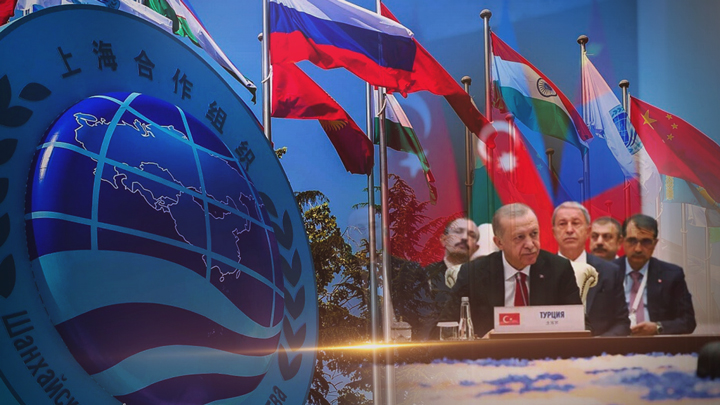 The Samarkand summit of the Shanghai Cooperation Organization (SCO) was held on September 15-16. The summit came at an eventful time, with Russia’s military operation in Ukraine, the grain, fertilizer and energy crisis, the Taiwan provocation, an attempted coup in Kazakhstan, the US defeat in Afghanistan, Greece’s harassment in the Aegean and the Azerbaijan-Armenia conflict.

Among the 9 members of the organization are China and India, the 2 most populace countries in the world, as well as Russia, the largest country by area.

SCO members account for 30 percent of global production. And this percentage is increasing every year. China and India will soon be number 1 and 2.

China, Russia, India and Pakistan are nuclear military powers. Iran’s steps in this direction continue, albeit at a slower pace. Three of the five most powerful armies in the world (China, Russia, India) are members of this organization.

From the middle of Europe to Africa and South America

Adding the SCO’s “observer member” and “dialogue partner” countries to the list, the size of this gigantic structure grows even more. In addition to Türkiye, these countries include Saudi Arabia, Egypt, Azerbaijan, Qatar and other countries important especially in the field of energy. Moreover, Argentina also announced its wish to take part in the SCO. Thus, the SCO, which started as an Asian initiative, has gradually transformed into a world movement extending to Africa and South America. The SCO has also reached the middle of Europe through Belarus, which is expected to become a member soon.

What we are facing is not a “Christian Club” like the EU. Shia Muslims, Sunni Muslims, Christians, Buddhists and Hindus are all under the same roof in the SCO. The political regimes are not alike either. What binds them together is the desire for independence from Western domination, solidarity, a just world and development through sharing and respect for each other’s sovereignty. They seek to resolve their disputes through dialogue and common interest.

Moreover, none of these countries partially or completely cedes its sovereignty to a higher authority when they become a member of the organization (unlike in the case of the EU or NATO). There is no mechanism imposing norms and laws from the top. Everyone has its own mindset; non-interference in internal affairs is the basic principle. And every member wants development through common interests.

Since 2012, President Tayyip Erdoğan has been making statements in favor of Türkiye joining the SCO. These statements, which started as “half-joking”, have become serious over time. Here are some of them:

“I made a joke to Putin during my recent trip to Russia. I said, ‘You tease us from time to time like what are you doing in the EU?’ Then let me tease you now, ‘Come on, include us in the Shanghai Five and let’s reconsider the EU’… I keep sending the message there, ‘You will lead us to other pursuits’.” (July 26, 2012).

“(After talking about the EU’s stalling) That’s why I recently said to Mr. Putin, ‘Take us into the Shanghai Five’. Take us in, and let’s say goodbye to the EU and quit. What is the point of stalling so long?”

“We said we would go. We said we would come if we were asked to come. Pakistan and India also want to go. They also have demands, we will see together. It exceeds them (the EU) in terms of population. Secondly, we will have the chance to be together with countries with which we have common values.” (January 25, 2013).

“(About the EU membership process) Very true. Fifty years of experience. Against this assessment of Mr. President (Putin), I respond with another one, I say: take Türkiye into the Shanghai Cooperation Organization. Save us from this distress. I have expressed before that we attach importance to the Shanghai Cooperation Organization.” (November 22, 2013).

Turkey is currently a dialogue partner of the SCO.

After attending the SCO summit, President Erdoğan clearly stated to the reporters that becoming a member of SCO is Türkiye’s target:

“Of course, we have a special relationship with the President of Uzbekistan Mr. Shevket Mirziyoyev. Because of this special relationship, he invited Mr. Ilham and me here specially. Now the next process is a step towards the most advanced stage. Of course, this step will perhaps come to the fore at a more advanced level during the talks in India, which will be the host of the next semester. Apart from being a member or not, our relations with these countries will be taken to a much higher level with this step.”

Upon Erdoğan’s remarks, a journalist asked, “Do you mean becoming a member?”, and Erdoğan replied, “Of course. That is the goal.”

Moreover, Erdoğan reiterated his call to restructure global governance, saying that his famous motto, “The world is bigger than five,” draws attention to the fact that the order established after World War II lost its ability to resolve crises.

Becoming a member of SCO is turning into Türkiye’s official policy.

“The Shanghai Five… Are they going to lead Türkiye into a period of dictatorial governments? We will not allow that. No one can keep Türkiye away from the civilized world it is heading to. Some people say, ‘We will do this or that with a majority of votes. It is not that easy. These are vain dreams.” (November 25, 2016)

The CHP’s accusation that SCO countries are “dictatorial regimes” is an indication that they will try to make Türkiye a puppet of the West in their possible government. It is clear that they will pursue a hostile policy against these countries, let alone cooperate with them. Considering that the CHP’s partners are all anti-Russia, anti-China and anti-Iran, it is natural to call them the “Biden crew”.

Vatan Party is the only organization in Türkiye that has included SCO membership in its party program. Article 18 of the National Government Programme titled “Cooperation and Alliance in Eurasia” is as follows:

“Türkiye will strengthen its cooperation and solidarity with all the Eurasian countries, especially with Russia, the People’s Republic of China, India and Pakistan. Türkiye will take its independent place within the Shanghai Cooperation Organization. Thus, conditions for the normalization of relations between Türkiye and USA, EU and for establishing new relations on the basis of mutual interest will be created.”

The Vatan Party’s policy of cooperation with Eurasia and the SCO countries is not limited to the program documents. For 50 years, Vatan Party has been working to improve Türkiye’s relations with the SCO member states, particularly China, Russia and Iran. It is in close contact with the government representatives of these countries. The Vatan Party considers it imperative to turn towards Asia in order to solve Türkiye’s security problems and economic woes.

Getting rid of shackles

The Samarkand Summit will leave a mark on the future of our world with its final declaration and messages. The SCO is the heart of the New World with its growing and developing structure. Any policy that will take Türkiye away from SCO is wrong. Türkiye’s 70 years of NATO membership and 60 years of EU candidacy, which have done nothing but harm, have now become shackles. Getting rid of these shackles will increase Türkiye’s chances of becoming the shining star of the New World.