“Türkiye can play a much more active role in Palestine” 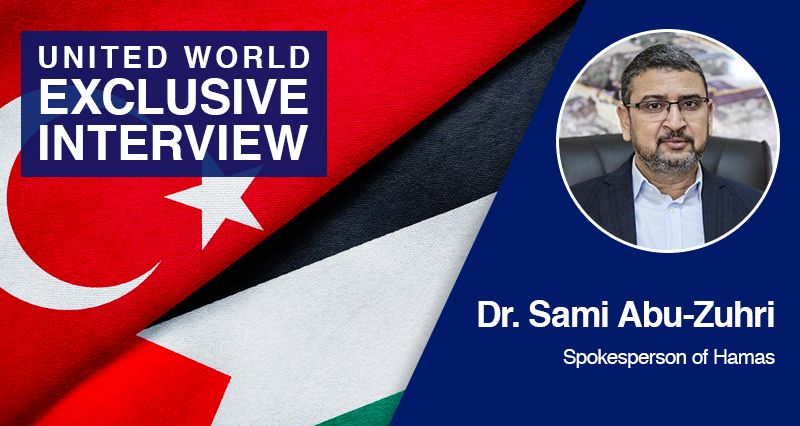 The Israeli attacks over the Gaza Strip, were repelled by the determination of the resistance. While the main target was seen as the resistance movement called Islamic Jihad, all eyes were turned towards a possible retaliation from Hamas. Spokesperson for Hamas, Dr. Sami Abu-Zuhri has given some exclusive statements for United World International.

Zuhri stressed for unity among the resistance movements. And called on Türkiye to play a much more active role.

A few days ago, the Israeli invader forces have launched a new wave of strikes over Gaza. This time the main target was determined as the Islamic Jihad Movement, instead of the Israeli ‘arch-enemy’ Hamas. 12 members of the Islamic Jihad, including prominent leaders such as Tayseer al-Jabari and Khalid Mansour, have lost their lives. And as a result of these airstrikes on the urban areas of Gaza and the gunfire shot by the Israeli troops, a total of 46 people have lost their lives.

The military wing of Islamic Jihad, Al-Quds Brigades have responded to the attacks with more than a hundred missile strikes. The border checkpoint, which Israel unilaterally closed, was badly damaged. The Israeli missile defence system, called the “Iron Dome”, was once again partially broken, and cities were hit. After a determined resistance and warnings on the ways of counter-attacks, the Israeli aggression has stopped. A ceasefire agreement was signed in Cairo.

The recent strike over the blockaded Gaza Strip, has been interpreted as an action amidst the upcoming Israeli elections. It was emphasized that the operation planned by Israeli Prime Minister Yair Lapid as an election campaign, has deliberately targeted Islamic Jihad, and not Hamas. So all eyes have turned towards the response from the Palestinian Islamic Resistance Movement (Hamas), which has been ruling Gaza for quite some time.

Aydinlik has reached out to Hamas officials and interviewed them for their views on the recent developments. Hamas spokesperson Dr. Sami Abu-Zuhri has given exclusive statements for Aydinlik.

Hamas spokesperson Zuhri defined the attack on Gaza as a “treacherous act of  Israeli invaders” and stated “An important leader of the Palestinian resistance was martyred”, for the assassination of the Islamic Jihad leader Tayseer al-Jabari. Zuhri also added:

“The Israeli invaders’ strikes over Gaza with no lawful reasoning in the last couple days had been a treacherous act, and an example of the crimes they had committed so far. This attack began with the murder and martyrdom of an important leader of the resistance. The Israeli invaders did not stop there and tried to expand the spectrum of the attacks. The attack continued with the slaughter of civilians, children and women all across Gaza.”

Emphasizing that Hamas is ready to respond to the attacks, Zuhri said, “The resistance leaders on the ground have succeeded in leading the struggle against the occupiers, and we have the power to lead this resistance to victory.”

The relations are ‘deep, strong and robust’ and the response will come from the operation room

Zuhri said that there is a “deep, strong and a robust” relationship between Hamas and the Islamic Jihad. He stressed that Hamas stands in every sense by the Islamic Jihad, which has been the target of the Israeli attacks and that a possible response to these attacks has been given from a “joint operations room.”

“There is a deep, strong and a robust relationship between Hamas and the Islamic Jihad. Although there are differences between the two movements in terms of political opinion, their current relationship is very solid. Their intercommunication is very solid. All steps are managed from a joint operations HQ of the Palestinian resistance. Joint steps as a result of negotiations also gave the responses to the recent attacks. The Al-Qassam Brigades of Hamas may not have been in this operation physically. However, Hamas has given its full support to the Islamic Jihad. It has stood by the Islamic Jihad and has been on the ground with a common stance.”

Despite their differences, Hamas’ reference to the murder of the leaders of Islamic Jihad as “martyrs” and its insistence that the responses were given from a “joint operations room”, upset Israel’s plans to drive a wedge between the two important movements in the Palestinian resistance.

The leaders will meet face-to-face

Zuhri noted that phone calls were held between the political leaders of the two movements after the ceasefire. He also announced that a face-to-face meeting would be held soon to discuss Israel’s latest attacks and possible retaliations to it.

The meeting between the leaders of Hamas and the Islamic Jihad, is considered as an important development for the Palestinian resistance movement, which has recently taken steps towards an inter-organizational unification. As a matter of fact, in early July, Hamas leader Ismail Haniyeh has met with the Fatah Movement leader and the Palestinian President Mahmoud Abbas for the first time in 15 years. After a strong response with missile strikes that has pierced the Iron Dome, as a result of the the Israeli attacks that took place last year, and uprisings in the streets that resemble another Intifada, Palestinian resistance organization has put the reunification agenda back on the table. It was also reported that the “joint operations room” in Gaza was established around that time.

Joint statement by the leaders of Hamas and the Islamic Jihad

The contents of the phone call between Hamas’ political bureau chief Ismail Haniyeh and the Secretary-General of the Islamic Jihad Movement Ziyad Nahaleh, were reported in the press the previous day. The Palestinian Information Center has reported that “Israel has failed to break the will of the Palestinian people, and that the two leaders are together in their resistance against the Israeli forces.”

The Hamas leader said that “the blood off all martyrs will be the light that shines on the path for freedom, while asking God for blessings on the martyred commanders of the Al-Quds Brigades, the military wing of the Islamic Jihad Movement, and on the martyrs from the people of Palestine.”

While discussing about the possible reflections of the recent clashes with the Israeli forces, Haniyeh and Nahale both stressed the importance of “the works that will improve the resistance activities in the field and what else can be done together to strengthen the unified resistance against Israel.”

A report on Hamas’ official website underlined that the two leaders stated “if the resistance commanders are martyred, others will fill in their ranks and the resistance will continue no matter what.”

Attacks continue over the West Bank

Despite the ceasefire in Gaza, Israeli attacks on the West Bank and Al-Aqsa Mosque still continue. Israeli Zionist fanatics are launching new raids to enter and attack Al-Aqsa Mosque. And the Israeli forces interfering with the Palestinian protests, still cause new deaths and injuries. Mumin Yasin Jaber, a 17-year-old Palestinian who was wounded by Israeli soldiers with a live round yesterday, has passed away despite intensive medical treatment.

It was also reported that the Israeli troops have martyred 3 Palestinian civilians in a raid in the occupied West Bank city of Nablus. A large group of Palestinians reacting to the raid, has clashed with Israeli troops. Jaber was wounded during these clashes.