Syria and Libya: Türkiye and Russia agree on coordinated position after talks in Sochi 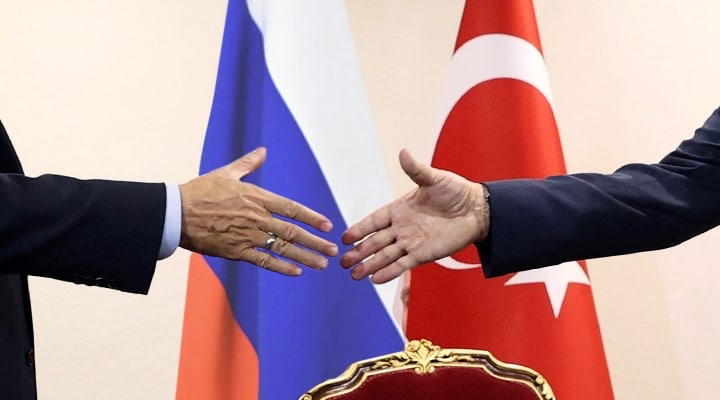 On August 5, Turkish and Russian Presidents Recep Tayyip Erdoğan and Vladimir Putin held talks in Sochi. The talks focused on trade and economic cooperation between the two countries, the “grain deal” to unblock grain exports from Ukraine’s Black Sea ports, energy cooperation, and the situation in Syria and Libya.

The Turkish president, welcoming his Russian colleague, “underlined the importance of solidarity between Türkiye and Russia in the fight against terror and added that their talks will help them take stronger steps on the issue,” according to the Turkish leader’s official website.

“Türkiye and Russia have made a great contribution to normalization” in Syria, Russian President Vladimir Putin stressed.

Syria: an opportunity to fight terrorism

Following the Sochi summit, the presidents of Türkiye and Russia adopted a joint statement. Special attention was paid to the preservation of the territorial unity of Syria and the fight against terrorism.

“In the meeting, where recent developments in Syria were also discussed, the Leaders underlined the importance they attach to the furtherance of the political process. Stressing the significance they attach to the preservation of Syria’s political unity and territorial integrity, the Leaders reaffirmed their determination to act in coordination and solidarity in the fight against all terrorist organizations,” the statement said.

Earlier, Russian presidential spokesman Dmitry Peskov said that in Syria,” Türkiye has legitimate security concerns that we of course take into account.”

Russia is making it de facto clear that it is ready to cooperate with Türkiye in fighting the U.S. proxy force, the terrorists of PKK/PYD. This is an important victory for Turkish diplomacy, helping to stabilize Syria and the Middle East in general, where the U.S. is using Kurdish separatists to undermine Türkiye, Syria, Iraq and Iran.

It is not yet known what practical steps will follow this statement. Maltepe University Faculty Member and International Relations Expert Prof. Dr. Hasan Ünal said in an interview with Aydınlık newspaper ahead of the meeting that:

“It is also important for Russia that Syria is brought to a peaceful settlement with effective sovereignty over all its territory. In this regard, there is not much of a problematic area between Türkiye ‘s national interests and Russia’s Syria policy. When we engage with the Syrian state and return to the days of the Adana Memorandum signed in 1998 and revised in 2010, almost all our security concerns will disappear, because then Syria and Türkiye will resume their joint fight against terrorism (PKK/PYD and its derivatives)”.

“There will be no need then for Türkiye to conduct operations in Syrian territory, to construct buildings, to settle populations, etc. on the territory under its control. America’s assumption that Erdoğan-led Türkiye will never agree with the Syrian government on any grounds and at any time will finish. This will upset the psychology of the other side and the US will not be able to maintain its presence in this region in a multipolar world order”.

It is also fundamentally important that Türkiye and Russia have agreed to coordinate each other’s efforts on Libya. Earlier, UWI wrote about the strengthening of the US and the UAE in Libya, interested in ousting both Russia and Türkiye.

Recall that the U.S. and France have a negative view of both Turkish and Russian military presence in Libya. It is obvious that Ankara and Moscow are interested in cooperation in order to limit the influence of imperialist powers in Libya.

The joint statement by Erdoğan and Putin noted: “The two leaders emphasized their strong commitment to Libya’s sovereignty, territorial integrity and national unity. They went on to underscore the importance of holding free, fair and credible elections based on the widest consensus possible and reiterated their support to the political process which continues under Libyan ownership and leadership”.

Commenting on the Sochi Summit, expert of United World International Mehmet Perinçek, told Aydınlık that Türkiye and Russia should agree on a “general strategy. “Türkiye and Russia can act together on Libya. The imperialist forces can be removed from Libya. If Türkiye convinces Western Libya and Russia convinces Eastern Libya, the problem will be solved. Russia is not against Libya’s oil sales. It will pave the way for the sale of Libyan oil and its use for the Libyan people.”

Together towards a multipolar world

As Steve Cook, senior fellow for Middle East and Africa Studies at the Council on Foreign Relations told France 24: “Neither the Turkish nor the Russian leadership feels very comfortable with an American-led global or regional order. And thus they’ve been able to cooperate…Türkiye very much wants to pursue a policy independent of the United States and its NATO allies. And that requires it to continue to have correct relations with Russia despite their vast differences on a number of regional conflicts.” Ankara’s and Moscow’s opponents are already concerned about the prospects for expanding their cooperation in Libya and Syria, where Turkish and Russian cooperation could put an end to the hegemonic aspirations of the West and its satellites.

In addition to cooperation in Syria and Libya, the Turkish and Russian presidents agreed “to increase the bilateral trade volume on a balanced basis and to achieve designated targets; to meet one another’s expectations on the economy and energy; to take concrete steps to boost collaboration about issues that have been pending on the agenda of both countries for a long time, concerning sectors such as transportation, commerce, agriculture, industry, finance, tourism and construction.”

The departure of European and American companies from Russia amid sanctions creates unique advantages for Turkish businesses. Thus, the expansion of trade turnover strengthens both Russia, which finds in Türkiye an alternative to Europe and the U.S. on many issues of trade support, and for Türkiye, whose economy encounters new opportunities.

Another decision of the summit – to conduct gas trade between Russia and Türkiye in rubles (that is, to switch from the dollar to national currencies) has a global significance, undermining the geo-economic hegemony of the United States.