Iraq trying to resolve the political impasse on the streets 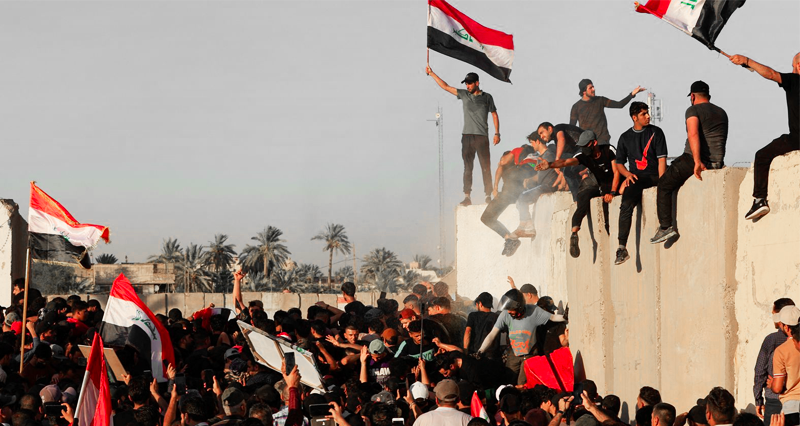 While the situation in Afghanistan has stabilised and progress is being made toward a settlement of the Syrian issue, Iraq is now experiencing a series of events that might bring the country to the verge of anarchy at any time.

Protesters have taken over the nation’s parliament building for the umpteenth time, making it impossible for the national assembly to convene. On the other hand, the political climate of the country has also reached an impasse, and now that the phase of street confrontation between opposing parties has begun, it is getting progressively more difficult to find a way out of the deadlock.

Where did the narrative begin?

With the military resistance he displayed in the shape of Jaish al-Mahdi militia unit against the American forces in 2004 and 2005 and afterwards, he boosted his social capital. Moqtada Sadr was persuaded by this high social capital that he should have a bigger role in the political scene of the county. As a result, in the last 10 years, he has become a factor of instability in the country due to his dissatisfaction with the political share he has received, despite helping Iraq further its goals in the 2000s.

Taking the country’s parliamentary elections seriously, Sadr emerged as the victorious faction in the most recent election (2021) after spearheading a significant portion of the street protests against the inefficiency and corruption of the government in 2019 and 2020. In the beginning, Moqtada Sadr attempted to form the broadest possible coalition of factions in the nation.

According to him, the parties cooperating with him in the formation of the government ought to refrain from joining the opposition and the opposition side should refrain from vying for power in return. In fact, Moqtada Sadr refused to work with any political factions to create a consensus government, instead depending on his social body.

Although Sadr tried to get some other political groups onside in order to build his desired government, the traditional Iraqi Shiite groups and other parties formed a working group with the name “Coordination Framework,” effectively forming a united front against him. This substantially put Sadr in a dead end and prevented him from achieving his political objectives.

Now, the opposition parties are refusing to work with Sadr to form a new government and nominate a candidate for prime minister while obstructing Sadr’s progress in nominating the desired candidate by skipping parliament meetings. However, Sadr is also attempting to prevent them from finding a prime ministerial candidate through legal means and unrests on the streets, and all of their efforts to contact a particular candidate run into Sadr’s obstacles.

Sadr’s movement has also progressed towards disturbing the political affairs of the country when the faction opposing him, who has the majority of seats in the country’s parliament, attempted to unseat him by proposing Hamad al-Shi’a al-Sudani as a candidate for prime minister.

Last Wednesday, Sadr’s supporters first entered the parliament. After that, he ordered them to leave and told the opposing groups that this time he intervened and asked his supporters to leave the building, warning that he will not do it again. On Saturday, while the political course of the country remained unchanged, Sadr once more mobilized his men and infiltrated Baghdad’s green zone, bringing the nation to the verge of conflict.

The interesting development is that those opposing Sadr, particularly those led by former Prime Minister Nouri al-Maliki, have declared that they will be forced to use force in response to any acts of violence committed by Sadr’s men. Nouri al-Maliki released footage of himself and his associates taking up arms in an effort to threaten Moqtada Sadr.

Meanwhile, Ammar al-Hakim, one of Iraq’s most prominent political leaders, made an effort to spread the political atmosphere by publishing a verse from the Qur’an in which Abel emphasizes to his brother Cain that even if Cain tries to kill him, he will not kill his brother.

Scenarios to break the deadlock

Over the past few days, all political and social groups in Iraq have been working to prevent a serious political and security catastrophe. Three alternative situations can be considered in this regard:

Regarding the tensions between the various political factions in the country, many experts believe that the government led by Al-Kazemi and the security intelligence system under his command are one of the factors behind these incidents. Some argue that by working with the US, Kazemi has made it more difficult for the country to achieve a political agreement and thus, he acts in the interests of the United States.

In fact, despite the fact that the US has formally withdrawn from Iraq, it still has the ability to jeopardize the country’s security and even its political system by exerting influence over the administrative employees, particularly in the security institutions.

As the region experienced a state of relative calm and stability, the United States’ interests in this matter came to attention after these events as well as the earlier incident took place in which Iraqi citizens in the Kurdistan region were targeted by artillery fire, killing several civilians, and Türkiye was later accused of carrying out the attack.

On the other hand, some organisations are attempting to accuse Iran of playing a role in the occurrence of the current predicament. However, Iran has consistently underlined that there is no need to interfere in Iraq’s internal affairs and that the existence of a strong and independent government in Baghdad will be Tehran’s greatest privilege. In addition, as the status of Iraq’s government affects Iran’s economic relations with its neighbouring country, a strong Iraqi government would reduce Iran’s security costs by easing regional political and security tensions.

Attempts to resolve political issues on the streets

Although many internal and external parties have been blamed for this crisis and other incidents in Iraq, it can be seen that the main reason of the problem lies in the attempts of political groups, particularly the Sadr movement, to resolve political issues with the support of street forces.

They are actually trying to neutralise their political opponents by relying on the Iraqi tribes and their traditional structure, that the Americans also worked with to stimulate and deepen during their period of occupation of the country, as well as by conducting street campaigns.

This strategy, which has been employed frequently over the past ten years particularly by the Sadr movement, is to blame for the ineffectiveness of democratic ways and the absence of political order in the country.