“The main issue is to agree on a joint general strategy” 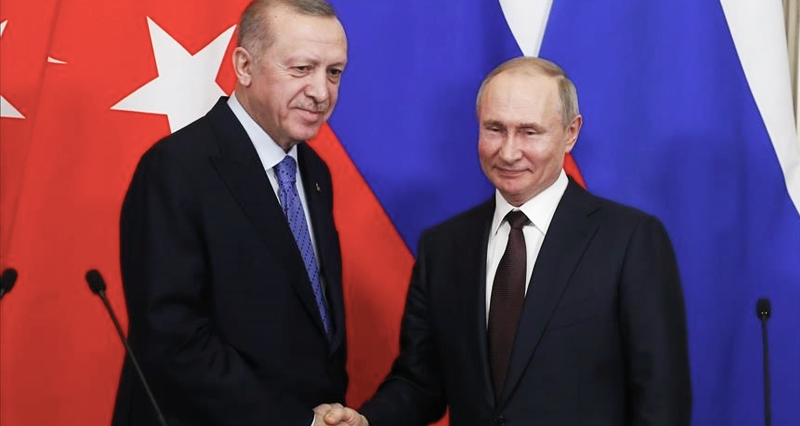 The upcoming Erdogan-Putin meeting on August 5th will deal with a wide range of issues and areas and is expected to be very inclusive. United World International experts Mehmet Perinçek and Onur Sinan Güzaltan have commented on the upcoming meeting.

Pointing out that separate discussions on each individual topic on the agenda are of secondary importance, Dr. Mehmet Perincek commented that, when a consensus is reached on a general strategy, all other issues between Türkiye and Russia can be resolved quickly and very constructively.

An academic at Moscow State University, Dr. Mehmet Perincek has evaluated the Erdogan-Putin meeting that will be held in the city of Sochi on August 5th in the CRI Turk channel, hosted by Mehmet Kivanc. In the program, Perincek stated that he expects strategic issues to be on the agenda at the upcoming summit.

Saying that Türkiye should “define itself within the Eurasian global strategy, put an end to its oscillations in its diplomatic relations with the United States and position itself on the opposite camp of American plans in all geographies of the world from the Taiwan crisis to the Falkland dispute.”

“If Türkiye and Russia manage to agree on a strategic alliance, and if Ankara defines itself within in a strategy that can disrupt the US plans in all the regions from the Black Sea to the Mediterranean, from Syria to Karabakh and to Libya by placing its policy within the Eurasian strategy, then Türkiye will be able to solve all the other issues with Russia in a go.”

“Russian support for Türkiye in Syria is possible”

Stating that Türkiye should explain its justifications for the operation in Syria to the Russian side, Perincek said that the goal of “removing the US presence in Syria”, put forward at the Astana Summit in Tehran, would not be possible without the contributions from the Turkish Armed Forces.

According to Perincek, the partners of Astana also have expectations from Türkiye in Syria, and some conditions must be met for them to get closer together. Perincek stated that he is conveying the expectations of the Russian side from Türkiye “not as an evaluation, but as a direct statement from the source” and added:

“Russian expectations do not object Türkiye’s operation in principle. They even have a point of view that may see the Turkish operation positively. That is because the Turkish Army’s elimination of the separatist terrorism there is something that can also benefit the Syrian government. Eliminating US influence from the east of Syria is perhaps the most important point. Therefore, this operation can be viewed positively, that is, of course if Türkiye diplomatically contacts the Syrian government on this issue and take action together.”

According to Perincek, Türkiye’s relationship with Damascus could open the door to a model in which Russia can “directly support the Turkish Armed Forces’ operations, rather than just giving consent”:

“As soon as Erdogan says ‘We will clear the separatist terrorism, and the Turkish Army can go beyond 30 kilometers from the border in order to do so. This is only to ensure the territorial integrity of Syria. The Turkish Army will only be there temporarily, and we are ready to do this in coordination with Damascus’, Russia would go beyond giving consent to the Turkish Armed Forces’ operation. Moscow than would support the operation. It is possible for Russia to not only give consent to the operation, but also to adopt an attitude that supports it. That is possible only if Ankara gives up its insistence on not establishing diplomatic contact with Damascus. Let me state this as a confirmed information.”

Noting that the Vatan Party delegation has been holding high-level talks in Moscow, Perincek added that a positive atmosphere was created on the Russian side regarding Türkiye’s military operation.

New Russian doctrine: The Eastern Mediterranean is a “matter of national importance”

Recalling the previous statement of the Russian Ambassador in Athens that “Russo-Greek relations have been completely destroyed”, Perincek stressed that this new situation also brings historical opportunities for Türkiye to finally escape its isolation in the Eastern Mediterranean issue.

Pointing out that the new doctrine of the Russian navy should also be examined properly in Türkiye, Perincek drew attention to the following points:

“The doctrine lists some of the critical areas for the Russian homeland security. Among these regions are the Black Sea and region of the Kuril Islands. And now the Eastern Mediterranean has been added to this list. ‘These regions are of critical importance to the Russian homeland security’. This is the exact sentence found in the new doctrine. Türkiye was severely isolated in the Eastern Mediterranean. Now Ankara has a very serious opportunity to relieve its isolation in this region. Firstly, it is a fact that the Greco-Russian relations have been ‘completely destroyed’. And secondly, the new Russian naval doctrine states that the Eastern Mediterranean is of critical importance to their homeland security. This gives Türkiye the opportunity to pull Russia to its side on issues such as the dispute on Cyprus and the Aegean islands. That is, if an overall strategy is agreed upon and Türkiye’s policies on Ukraine and the Black Sea are aligned with the policies in Syria.”

Perincek thinks that the current foreign policy, expressed as a policy of balance of power, does not really benefit Türkiye. He said, “the American threats on economy and national security can only be prevented by a full cooperation with the Eurasian countries.”

Continuing his doctorate studies at the Moscow RUDN University, UWI expert and political scientist Onur Sinan Guzaltan said in interview to Sputniknews that many important topics would be discussed during this meeting:

“The primary topic that will be discussed between Putin and Erdogan is surely going to be the bilateral trade, because Türkiye almost acts as a lifeline, after the sudden contraction in the Russian markets due to Western sanctions. It is likely that the leaders will discuss possible Russian investments in Türkiye, current Turkish investments in the Russian market and tourism. The details on the so-called Grain Corridor are also likely to be evaluated. Likely, especially ideas will be exchanged on possible joint measures that could be taken to prevent any American provocations.

There are also reports that Russia has a new way to approach Türkiye in the defense industries. Hence, this provides more topics for discussion. We can also predict that the leaders will exchange ideas on the topics of Iraq and Libya. On the other hand, there is also a new potential for a cooperation on the issues of Palestine and Lebanon, after the recent strain between Russia and Israel.”

Guzaltan also added “We can clearly see that the Russo-Turkish cooperation is deepening and reaching new field by each diplomatic meeting. Therefore, both countries have a very critical process before them.”