Can the “Jerusalem Join Declaration” and Middle Eastern NATO protect Israel from the inevitable fate? 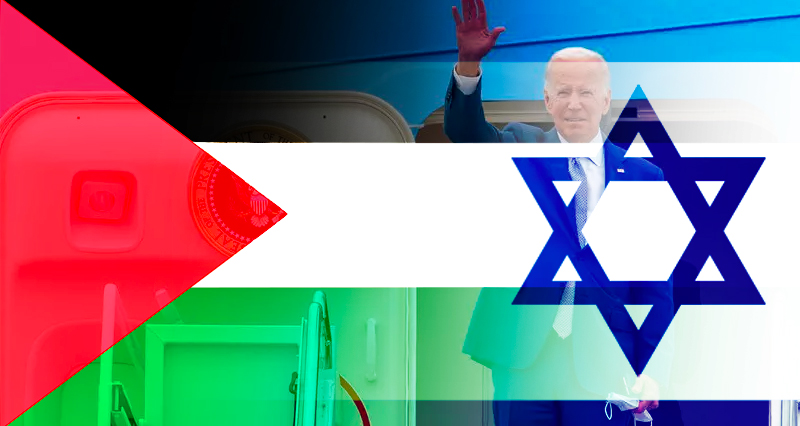 US President Joe Biden is visiting the region, beginning with a visit to occupied Palestine, where he will meet with the Zionist leadership, and then conclude with a courtesy meeting with Palestinian President Mahmoud Abbas in Bethlehem.

He will then embark on a visit to the Kingdom of Saudi Arabia. And unfortunately, it will be via a direct flight from Tel Aviv to Riyadh; in reference to the most important goals of the visit, “normalising” the entity’s relations with its surroundings, according to the US President’s article in the Washington Post.

Biden concludes his visit with a comprehensive conference where leaders of some Arab countries will meet to announce the establishment of a new “security forum” that brings together these countries and Israel under American auspices. He also hopes that this forum will constitute a Middle Eastern “NATO” to coordinate reactions to any security developments in the region. It is a major step on the way of the American integration efforts of Israel in the region.

Biden visits the region, laden with a year and a half of internal mismanagement that may cause him a resounding defeat in the upcoming midterm elections, as well as strategic blindness in managing international affairs, which may push the world towards a third world war. Biden comes to the region and carries a plan to achieve three primary goals.

First: Solving the global oil crisis, which began to be reflected in the global economy, including the American economy. High prices and inflation, the highest in 40 years, foretell a deep economic recession. In order to achieve this goal, Biden seeks to raise the daily rate of oil production to reduce prices and deprive Russia of the proceeds of high oil prices. Biden has withdrawn many of the policies he announced at the beginning of his term like adhering to the values of democracy, human rights, freedom of speech and upholding good governance.

Second: Re-engineering the region anew, according to the American vision, in order to allow the integration of Israel into the region and legitimize its existence without solving Palestinian-Israeli conflict and even according to the declared American vision based on the two-state solution. This is in addition to presenting the occupying power in the region as a commander of the security and military situation, apparently under American supervision, in compensation for the decline in the American presence in the region, at the expense of focusing on other conflicts with China and Russia.

The third goal is to buy Palestinian calmness in return for a courtesy visit, empty political promises. The Palestinian cause is a marginal part of the visit’s agenda. Biden has no vision to get out of the deadlock here. He doesn’t even exert any pressure to bring both parties to the negotiating table, according to the US policy adopted for decades, which is based on the two-state solution and the rejection of annexation and settlement. Rather, the current US administration has adopted the same vision that former President Donald Trump included in the Deal of the Century, which talks about “economic peace” meaning improving the conditions of life in the open Zionist prison.

This was clearly documented in the so called “Jerusalem Joint Declaration”, which was a Zionist document par excellence, signed by an American president and can be considered as a security Annex to the 1917 British Balfour Declaration, guaranteeing the Jews a homeland in Palestine, on the expense of our people. The declaration is only concerned about the security and legitimacy of Israel, even peaceful calls to boycott it through “BDS” are not allowed and are considered as a strategic threat to undermine its legitimacy.

All indications in the medium and long term show that Biden and his administration will fail to achieve any of its goals, and he will not be able to save himself and his party at the national level, and will not succeed in legitimizing this fascist racist entity or integrating it in the region. The “Jerusalem Joint Declaration” reflects the strategic blindness of the successive US administrations, its ignorance of history, its superficial understanding of the region and its enormous potential for rebellion and revolution, despite of all desperate conditions. Even Biden will not be able to achieve a formal regional consensus behind its policies, whether at the level of its stance toward Israel, Iran, or even in the confrontation with Russia and China.

As for the attempts to establish a Middle Eastern “NATO” in order to integrate and legitimize its presence in the region, this is again an expression of superficial strategic thinking and ignorance about the nature of the region.

The meeting may happen and the names of new forums in the region may be announced, but this idea will be stillborn. This new arrangement faces great challenges that will inevitably make it fail sooner or later.

By the way, political and economic entities have been formed in the region over the past decades, all of which have failed to achieve their goals, despite their great potential for success, such as geographical proximity, unity of goals, and historical, religious and cultural commonality.

Perhaps one of the most important reasons for that failure is that those entities are not based on free popular will, and that it defends the interests of quarrelsome regimes or policies that are inconsistent with the history and creed of the nation. So how about an alliance based on strategic threats to some countries in the region by others.

Like it or not, agree or disagree, countries like Iran and Turkey will remain central countries in the region that have long contributed to the establishment of their history and identity, and what they have in common with the countries of the region is too great to be undermined by such schemes. This fascist racist entity, Israel, which directly contributed to weakening and dismantling the region, will remain alien to the region’s DNA, and all immunosuppressive drugs will not be able to force the region’s body to accept it; and at the first opportunity, this body will expel it forever.

On the Palestinian level, these superficial measures may extend the life of the Oslo Authority a little, which has never been that bad and rejected by public as today. This authority and its political and legal basis, the “Oslo Agreement”, have exhausted its purposes. Our people know in detail the extent of the destruction and the labyrinth these agreements have brought us, and they will not allow this farce to continue. Our people will adhere to their historical rights and will insist on realizing their dreams of freedom, independence and return, no matter how long it takes, by all means, notably the armed resistance.

The Palestinian people have read their history and people’s experiences well, and extended their hands for peace based on genuine rights for a long time but this hand was met with unprecedented racism and brutality, unfortunately, with international cover and support, especially from the USA. Our people began their resistance against the Zionist project more than a hundred years before the establishment of the entity, and they are ready to continue this resistance for another hundred years until the Zionist project on our land is dismantled and an independent Palestinian state with Jerusalem as its capital is established.

The real problem is with the countries of the region: How can they allow the establishment of Zionist bases?

The real problem is not in US policy or in Zionist ambitions, but rather in the region and its countries, it is a subjective problem: How do these countries form alliances with an entity that has made effort for decades to dismantle the region and their states and ignite the fires of sedition among their people?

How will countries in the region allow the establishment of Zionist bases, in order to threaten their neighbors, on their lands? Some raise their concerns about the regional policies of some countries, such as Iran, but after all, Iran is a neighboring country with which we have strategic interests. This will not be changed by such artificial alliances. Rather, it will drain the region and waste its resources in absurd battles that will not achieve its goals, even if it takes decades.

Here, it must be mentioned that the functional entity “Israel” suffers from intractable crises internally and strategic threats externally, according to its security and strategic experts. This entity is experiencing internal political impossibility, as it is unable to produce a stable leadership, and it will hold its fifth elections in less than four years, and all indications show that it will lead to a sixth election.

This entity had difficult days as the defenseless Palestinian people mobilized in all their arenas against the occupation in the historic battle of the Sword of Jerusalem. Despite all its advanced technology, this entity could not protect its cities and settlements from locally produced resistance bullets. The leaders of the frontline in Israel speak of its imminent demise and the possibility of its collapse due to its deep and intractable crises. Can such an artificial entity, based on fragile foundations and alien to its environment, protect others?

The only solution for our region is the strategic dialogue between all its components for a consensus in order to lead the region towards a better future with unity, independence, prosperity and the liberation of Palestine after the dismantling of the Zionist entity which is not only a usurper of Palestinian land and rights, but also an element of sabotage and continuous destruction of the region, a functional project and an extension of Western colonialism on this region.

The second task of the region’s leaders who are keen on future is to form a solid political alliance based on the vital forces of the nation, states and parties against this project of re-engineering the region to serve the integration of Israel and its strategic interests in the region.

The United States and its protégé, “Israel”, will not back down from such projects, if it does not feel that it is facing a solid, coherent and extended resistance throughout the region and that it is draining their capabilities and putting their interests at stake. The lessons to be learned on this subject are many in recent history, from Vietnam through Somalia and Iraq to Afghanistan. In this context, this regional alliance between the components of the region can be strengthened by open and strategic relations with all the emerging powers internationally, particularly Russia and China.

As for the official Palestinian leadership, they have to take serious steps to reform the Palestinian political system so that it expresses the will of the people and represents all factions, and immediate disavow from “Oslo Accords” and its annexes.

We are assured of the justice of our cause and the inevitability of victory, return, and the demise of this functional entity.