On the sixtieth anniversary of Algerian Independence 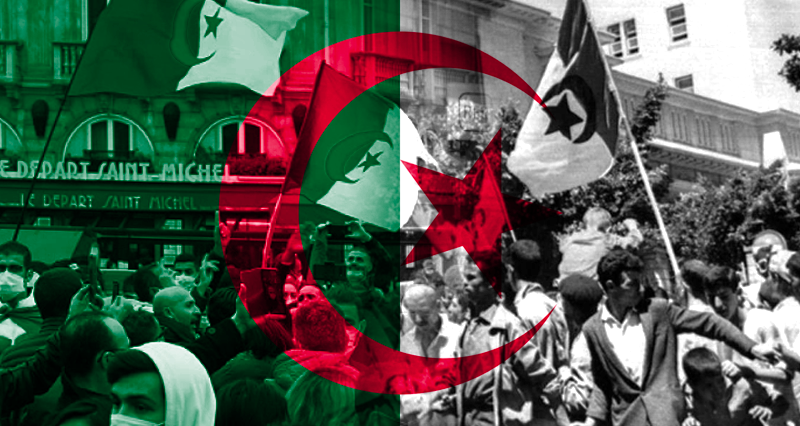 History and its vagaries made Venezuela and Algeria – two brother countries in the struggle against imperialism and colonialism and in favor of respect for the sovereignty and self-determination of peoples – commemorate the date of their independence on the same day.

The Algerian people celebrated this July 5 sixty years of its emancipation and birth as a free country, after 132 years of brutal colonial occupation by France. This was a period when the Algerians stood firm, developing a long struggle of resistance that lasted the entire 19th century and more than half of the 20th. The struggle continued until the glorious Revolution of November 1, 1954 broke out throughout the national territory and lead to the victory of July 5, 1962.

In fact, the French occupation caused a deep fissure in the construction of society, after its efforts to stop the cultural and social growth of Algeria during the entire colonial period. The metropolis has in that perios tried to erase the national identity and liquidate the material foundations and morals on which the feeling of the Algerian people was created, hitting the tribal and family unity and carrying out a “missionary” policy with the aim of erasing religion and Islamic beliefs. However, all its attempts failed in the face of the firmness of the Algerian people.

Today, Algeria celebrates the sixtieth anniversary of its victorious Revolution, for which more than one and a half million martyrs sacrificed themselves to raise the free flag of their homeland. In recent history, their struggle has become a model to follow as an expression of the desire for freedom and justice that led to independence and the construction of a National State capable of embodying the free will of the people and achieving the objectives outlined in the struggle. against colonialism.

The independent Algeria has carried out a long battle of 60 years both internally and externally. Frontlines were the construction of a strong State, capable of safeguarding its vital resources and interests and achieving goals of stability, progress, and global development, to the point of earning a position of respect in the world in which it has played an active and positive role in defense of the legitimate causes and rights of the countries and peoples struggling to achieve their self-determination.

The invocation of this anniversary coincides with a series of achievements made at various levels and scales despite the difficult period that the country went through in the early 1990s. That period forced the Algerian nation to strengthen its social cohesion thanks to the adherence of citizens to the values of national reconciliation and the principles of November 1, which continue to be a source of inspiration for the development of State policy.

In its 60 years of independent life, Algeria had to fight the battle against jihad, in which it had to firmly face great challenges, achieving important achievements in various sectors and areas, which have already and will in future bear witness to the glory of the Algerian people.

After those years of obscurantism that upset the country’s development process, the State managed to make up for lost time and was able to defeat the forces of evil, defeating ideologies based on extremism and violence, with the sacrifice of its best children. In this difficult situation, the National Popular Army and the security apparatus had to assume their responsibility as the vanguard of society to face the blind terrorism that devastated the country.

Since its founding, Algeria has made great efforts to consolidate the principles on which the revolution of November 1, 1954 was built. Among thes estands out the support of democracy, free education and training, ensuring promotion and protection of human, political, economic, social, cultural, media rights and other values of civilization that paved the way for Algeria to move from revolutionary legitimacy to constitutional legitimacy.

Algeria has also embarked on a path of evaluation, concluding on the need to reform the structures of the State and its missions, in order to give the institutions essential tools to support the democratic path, consolidate good governance, modernize the economy and promote social progress. These instruments have contributed to transforming Algeria into an great laboratory, where its achievements and the various development projects that have been carried out have resulted in an undoubted benefit for the people.

The figures of the Algerian economy in the year 2021 indicate the contribution of the agricultural sector to the GDP at 20%, that is to say around 32 billion dollars. The government has committed to doubling that figure by supporting agriculture through the expansion of the regions irrigated with deep well water in the Greater Desert regions, to improve the rational exploitation of agricultural land through the digitalization program of this strategic sector.

Since the early seventies and eighties of the last century, Algeria has been interested in the development of projects in the field of industry, through the creation of centers and polygons throughout the national territory, initially focused on heavy industry from a model of its own socialist system. The goal was to ensure that all sectors, such as fertilizers, the food industry, metallurgical, petrochemical, electrical, steel, mechanical, pharmaceutical and others, were included. These large projects have contributed to providing jobs despite the difficulties that arise from the need to keep up with the pace of progress and technological development that is taking place in the world.

In the field of energy, and given that Algeria is one of the largest oil and gas producers in the world and the second biggest gas supplier to Europe after Russia, its interests have been focused since the early 1990s in the realization of multiple giant projects, among which the development of the activity of the state company Sonatrach stands out, through the realization of three oil refining plants and two ammonia and urea production plants. It also completed 13 seawater desalination plants and five large gas pipelines to transport gas from Algeria to Europe.

“Project of the century”

Likewise, the so-called “Project of the Century” is being carried out, which is the trans-Saharan gas pipeline that comes from Nigeria through Niger to Algeria. Its construction has reached an advanced phase, with a length of 4,128 km, and a capacity of more than 30 billion cubic meters per year, waiting to be connected to the network of Algerian gas pipelines bound for Europe.

Algeria is committed to making 2022 a year of economic takeoff based on its own capabilities and open to cooperation on the basis of common interests and mutual benefits amid a trend to review its legal framework, including the investment law and municipal laws and state governments that are intimately related to development issues.

On the other hand, Algerian diplomacy has been able to resolve many crises and tensions at the regional and international level over the decades, thanks to its history, its effectiveness, the firmness of its principles and its unwavering commitment to defending the causes of peoples fighting for their independence.

In this sense, its continued support for the Palestinian cause and that of the Saharawi people is especially relevant. It has also made a great contribution to the solution of several international conflicts, among which we can mention the agreement signed in 1975 on the territorial dispute between Iraq and Iran, the release of US hostages in Tehran in 1981 and the agreement of peace between Ethiopia and Eritrea in 2000. Algeria also managed, during its presidency of the United Nations General Assembly in 1974, to suspend South Africa’s membership in the international organization due to the policy of racial discrimination practiced at that time in said country.

From this point of view, Algerian diplomacy continues its tireless work of shaping the main guidelines of its foreign policy, focused on giving special importance to South-South cooperation, strengthening its presence and influence in the coastal regions and the Greater Maghreb, as well as promoting cooperation dynamics in all the international organizations to which it belongs.

Its role on the international stage has been reinforced since President Abdelmajid Tebboune assumed the reins of the government, especially in the resolution of thorny disputes, thanks to the moderation and neutrality that marked his diplomatic credit since independence.

Regarding the Libyan crisis, Algeria insisted on urging the parties to the conflict to engage in a global political dialogue under the auspices of the United Nations and neighboring countries, in order to build legitimate institutions through free and fair elections that lead the country to its salvation, prioritizing the supreme interests of the Libyan people through dialogue as the most effective way to resolve this crisis.

Parallel to this, Algerian diplomacy is active in the coastal and desert region of Mali, which is inseparable from the Libyan issue, and tirelessly seeks to activate the plan for peace and reconciliation signed between the parties to the Malian conflict, in accordance with the aspirations of its people in terms of security, stability and development.

Regarding the cause of Western Sahara, Algeria’s position is firm and in accordance with its principles, since it supports the right of the Saharawi people to self-determination. This is in line with international legitimacy and the corresponding resolutions of the United Nations and the African Union. Given the dangerous escalation experienced by the conflict after the Moroccan aggression against the Guerguerat region and the repression and violation of the rights of the Saharawi people in the occupied territories, Algeria warned of the consequences that this situation could mean for the security and peace of the region and called on the United Nations and the international community to assume their responsibilities.

In addition, Algeria has contributed since its independence to support the Palestinian cause by various means and has made particular efforts to unify Arab positions towards it. Algeria’s support has not been limited to the official level, but the people have mobilized with all its actors and components to launch initiatives of solidarity and support for the Palestinian people, expressing their condemnation of the practices of the Zionist entity and supporting the Palestinian people in the recovery of all their legitimate rights, in particular the right to build their independent State with Jerusalem as its capital. Algeria, based on its firm convictions and unconditional support for the Palestinian cause, has rejected any form of normalization of relations with the Zionist entity.

At the international level, Algeria has called for several years the need for a comprehensive reform of the United Nations, in order to improve its performance and increase its efficiency and capabilities, in order to better serve the very varied causes that mobilize the planet, especially in light of current regional and global conditions. This was reaffirmed by President Tebboune during his participation via teleconference in the 75th session of the United Nations, held in September 2021 in New York.

In this framework, relations between Algeria and Venezuela are on the right foot, as confirmed by the recent visit of President Nicolás Maduro to Algeria last June. Upon his arrival in Algiers, President Maduro reported that: “We arrived in the People’s Democratic Republic of Algeria, within the framework of our international agenda, we are very happy to meet again and be able to review our agenda of cooperation and complementarity, in favor of the peoples”.