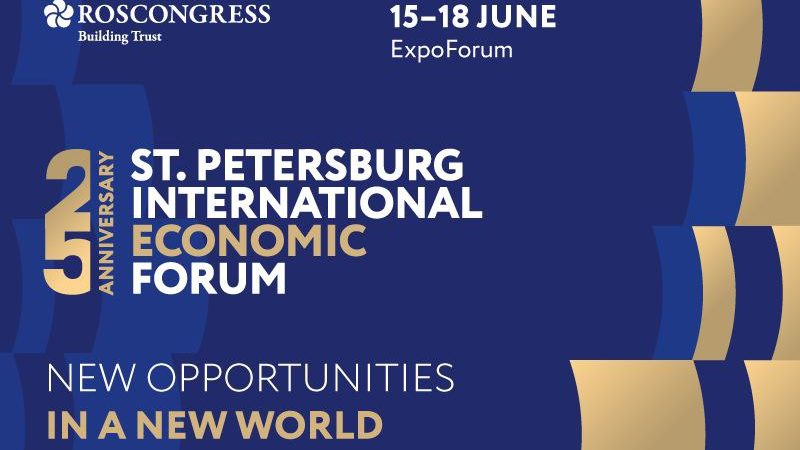 A look at this picture shows that now, Gulf countries also have started to develop very good relations with Russia, including an intensive participation from these countries at the forum.

The stance they have taken after Russia’s special military operation in Ukraine is reflected in their presence and position in the St. Petersburg Economic Forum.

The St. Petersburg Economic Forum shows us that a new world order is being established. Although Western presence at the forum, which celebrates its 25th convention this year, is almost null due to the sanctions regime, still the convention reflects the establishment of this new world order, with the forum displaying exactly the fact that neither the world nor the economic space is limited to Westerners.

Participation in forum shows failure of unilateral US sanctions

One of the most important sessions that demonstrated that a new world order is being established, was the one titled “A New Form of International Cooperation: How will Payments be Made?” In this panel, new payment systems were discussed. And if we take a look at the panelists of this session, we see the gathering of the Axis of Evil from Washington’s perspective. Which countries were represented in this panel? Russia, Turkey, Venezuela, Cuba and a representative from Egypt.

The Russian panelist was Vladimir Komlev, Chairman of the Management Board and Chief Executive Officer of the National Payment Card System. Komlev indicated that the crisis offers opportunities, emphasizing that the most important need was to establish a new payment system that would enable Russians to pursue payments easily when travelling abroad. This is necessary, as Russian credit cards are now not valid outside Russia anymore.

Komlev than described that the Russian MIR system started a similar process on internationalization, which is not only addressing the problem of Russians travelling abroad but also foreigners travelling to Russia. For instance, if a Turkish tourist arrives in Russia, his credit card will not work there, thus facing the problem of being able to make payments here. Komlev thus emphasized the need that joint work has to be done here, with promoting the MIR or similar systems in Eurasian countries.

In representation of Venezuela spoke Calixto Jose Ortega Sanchez, President of the country’s Central Bank. Ortega started his speech emphasizing that Venezuela was under a blockade. He continued and stated the following:

“We are under a blockade especially since 2019. Concerning the topic of payment systems, we are pursuing a national policy and have developed our own system. Now, our citizens are able to pursue their daily payments and exchanges over this new system. Venezuela had suffered serious problems on this topic before, but now, we have an own payment system that works without ever being interrupted from the outside.”

“Our priority task was to establish and make work this system domestically. We are about to fulfill this task. In that sense, we are cooperating with China, Turkey and Russia. Our cooperation is not limited to technology transfer but encompasses other aspects of payment systems too.

Besides that, we have also established our own national social media, called Venapp, creating an alternative to Western social media networks. This is not just a social media platform where citizens communicate with each other, it also serves as a system where the people can transmit their demands and proposals to the government.”

Another speaker in the panel was Alberto Quinones Betancourt, Director General of Systems Technology and Development in the Central Bank of Cuba. Betancourt also stated that they started to develop a national payment system, which everyday was including more members, and where Cuba was following the path of Venezuela.

Betancourt emphasized that Cuba was under a blockade since 60 years and added that a national payment system was important in order to provide foreigners arriving to Cuba a means to pursue spending. The Cuban speaker said his country was in an intensive cooperation with the Chinese on that matter and added that the Russian MIR system was going to start operations in Cuba by the end of the year. He said that the Russians had provided in the recent times great support for hat purpose, including in technological aspects. Betancourt finished his speech stating, “Cuba is living the digital revolution”.

Tinatin Kandelaki, Deputy General Director in the Gazprom Media-Holding, moderated the panel. Kandelaki than gave the word to the Deputy Chairman of the Turkish Central Bank, Emrah Şener, calling Türkiye “a strategic partner”.

Şener started his speech asking, what was the future of these payment systems, emphasizing that globally, the transition from cash payments to card use was propagated. But in spite of that trend, cash payments were always number one, said the Deputy Chairman of Türkiye’s Central Bank, emphasizing that such payments did not need a bank or bank account to be realized.

He provided an example: a Pakistani travels for work to Canada and sends from their remittances to his family back home. Şener stated that people in total were paying 800 billion dollars of commission when using these payment systems to send money back home. In other words, migrants who were working in western countries to support their families back home were enriching other sides by 800 billion dollars yearly when sending money home – a transfer from the poor working to the already rich transnational companies.

Şener’s most important emphasis was that the future belonged to cash payment. By cash payment, he was not referring to payment with the paper bills but to digital currency. The Deputy Chairman of the Central Bank said that according works had started in Türkiye, with the issue being a sophisticated and difficult matter in terms of security etc. Şener said, if the panel was to reunite within some years again, then the panelists were going to speak not about credit cards but about digital currency, because the latter has no cost of transfer, with no obligation to pay commission to anybody. Digital currency can be transferred easily by phone, thus having a great future.

The Venezuelan panelist later also supported this evaluation, stating “I agree with my Turkish colleague, the future belongs to digital currency”. In sum, we can say that the debate on digital currencies dominated the panel.

The following speaker was Tarek Raouf, Chief Executive Officer of the Egyptian Banks Company (EBC). Raouf stated they were not obligated to follow Western recipes, also highlighting the importance of cooperation between Eurasian countries.

Another session that displayed the establishment of a new world carried the title “Partnerships in Eurasia: New Opportunities”. In this panel, the importance of national currencies, the progress of regional integrations, and the importance of trade routes and logistics between Eurasian countries were discussed an emphasized. All panelists stated the emergence of a new world order awaiting humanity in the future.

The Iranian speaker, Ahmed Salahi emphasized the importance of de-dolarization and multipolarity.

On behalf of Egypt spoke in this panel Yahya Elwathik Bellah Abdelmoneim Ahmed, First Undersecretary, Head of the Egyptian Commercial Service, Ministry of Trade and Industry of the Arab Republic of Egypt. He stated that it was necessary to give up Western models of cooperation, because these were developed on the ground of Western exploitation of African resources ad riches. He said new models had to be introduced instead.

For Russia spoke Alexander Galushka, Vice President, Civic Chamber of the Russian Federation, Minister of Development of the Far East. Galushka demonstrated that de-dolarization was advancing fast globally by using statistics and according data.

Another panel was held on Russia-Africa relations. In this panel, Sergei Glazyev, Member of the Board, Minister in Charge of Integration and Macroeconomics, Eurasian Economic Commission held a speech, stating that the West was leading a hybrid war against humanity. Glazyev emphasized that in this confrontation, Russia and African countries were on the same side, indicating that both had comprehensive common interests as they were also facing common problems. Glazyev declared they were working to establish a joint Russian-African stock market, while also pointing out the experiences in cooperation between the two sides during Soviet times. .

The Prime Minister of the Central African Republic, Felix Moloua, also spoke n the panel, stating that Russian military bases may be established in his country.

In this session, policies of France and other imperialist powers in Africa were debated along with proposals how to collaborate against their plans.

All the panels and speeches on the first day of the Forum have shown that both in terms of economy as well as geopolitics, a new world is being established.

One response to “St. Petersburg Economic Forum displays the establishment of a new world order”