The situation of the Lebanese economy 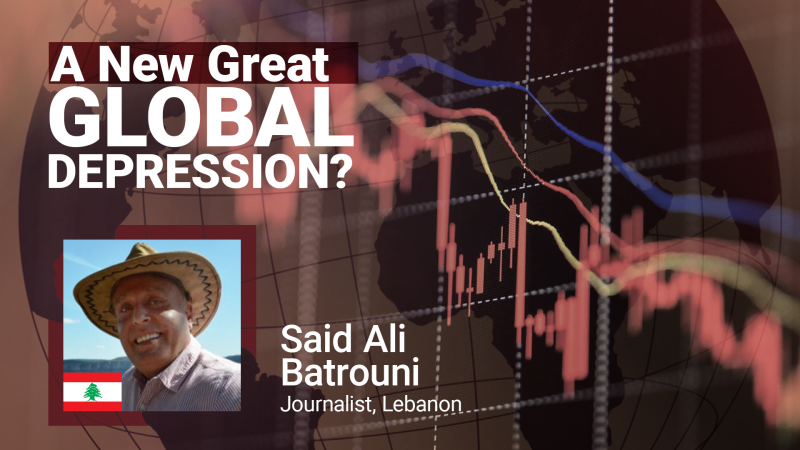 The global capitalist economy seems in disarray. From increasing inflation to vulnerable supply chains, from endangered food production to energy transition and crisis – complaints and warning calls rise at nearly every chapter and branch of the world economy.

United World International thus has started a new series of articles and interviews that will shed light on the situation of the global economy from the perspective of different national economies.

Above all stands the question, whether the world is heading towards a new global great depression, as witnessed in 1929.

Today, we have interviewed Said Ali Batrouni. Batrouni is a journalist from Lebanon, one of the countries that have been facing the severest economic crisis in the last years. Batrouni has been working for the Los Angeles Times, Al Intishar newspaper among others and is currently Editor in Chief of the website polyprognoz.com.

How do evaluate your country’s economy currently?

The Lebanese economic difficulties are among the worst economic collapses in modern history, possibly to rank very high among the most severe global and financial crises since the mid nineteenth century. The Lebanese pound was pegged at around 1,500 to US dollars, but since October 2019 the currency has lost gradually its original value, up to an almost 80% drop. A couple of weeks ago, immediately after the parliamentary election, 1 US dollar was traded on the black market for thirty five thousand Lebanese lira. The consequence is severe inflation. The Lebanese central bank has lost the solvency to provide hard currency in the market while demand has soared. As a result, it is estimated that almost 75% of Lebanese population is now at or below the line of poverty. For example, Lebanon’s GDP dropped from about US$ 55 billion to US$ 20.5 billion in 2021, and then to US $ 12 billion in 2022 reaching over %45 drop in less than 2 years. Such a brutal shrinkage was unprecedented even during the Lebanese civil war in 1975.

Do you observe signs of an economic crisis in your country? If so based on what indicators?

One of major indicator of the Lebanese economic crisis is that first the Lebanese currency value is spiralling in negative devaluation out of control. The price of food and medicine has skyrocketed, while today gasoline has reached almost seven hundred and seventy Lebanese lira – the equivalent to $30. Considering the fact the average monthly pay is no more than one hundred and twenty dollars, which is not enough to cover transportation expense for average employee, more three times leaving another expenses as food and medicine uncovered, as a result hyperinflation and shortages of basic goods will remain driving the middle class to levels of bankruptcy a crash levels. According to most recent data, inflation has reached over 200%.

Regarding the causes of the economic crisis: which are domestic and which are international factors that you consider as important? How do you see the relation between these?

Despite the fact that many scholars reject conspiracy theories, these theories merely shift the burden of proof and place on the consequences! I believe that the systematic distraction of the Lebanese economy in general and its banking sector in particular was well crafted and implanted with the mind of a serpentine.

To begin with, Lebanon has suffered continuously and even before the civil war from deep inequality, poverty and unemployment which reached 20% even during the 70’s. This resulted always in massive migrations. The Lebanese inflation kept worsening, because the political elite was either unwilling or incapable to reach to cause of the problem. This occurred due to either corruption, sectarianism or both. Nevertheless, Lebanon was considered the safe funds holding of the Arab world. The Lebanese elite created a fiscal system, which avoided frequent legislation to curve spending, while compensating for public debt by means of continuous borrowing. Before the civil war, a poverty belt was established around Beirut, comprised of Palestinians and other nationalities. When the civil war ended the Lebanese economy and public finances, which accumulated during the stable years, has dried out.

After the civil war ended, a troika of members of warlords was established, comprising of the President, the Prime Minister Rafik Harriri and the speaker of the House. During the reign of Rafik Harriri, a sudden cabal was in the making while the Lebanese pound was stable at 800 LP to 1 USD.  Suddenly, the Lebanese pound fell prey to unprecedented attack, which made it sink to 2,800 Lb to USD. Many observe that the pressure was a result of deliberate manipulation. Searching for a saver to stabilize the Lebanese pound, the warlords have joined the radical Harriri with extremely wealthy businessmen who came to power in trouble circumstances to implement a foreign plot in order to peg the Lebanese pound to US dollars.

Hariri introduced a tripartite agreement between the government, the commercial banks and the central bank of Lebanon, according to which private banks are committed to finance the government debt regardless of its amount in exchange for soaring interest rates. Later, when this clientelist agreement was in full use, and because of this commitment, the government decided to raise debts in US dollars to maintain currency stability: maintains currency stability between 1993 and 2018 public debt was multiplied by 28 times while the GDP was only multiplied by 9 as a result the debt share to the GDP grew from 50% to 155%.

The path of dollarizing the Lebanese economy has causes the loss of monetary autonomy and raised the risk of greater vulnerability to foreign exchange. The same method had been used in Ecuador.

How do you see the future of the global economy?

To begin with, the Russian Ukrainian war is leading the world food security toward a likelihood of possible famine in many underdeveloped countries. It is expected that next year, food prices of legumes and meats will double, because large producers of meats and legumes in Latin America such as Brazil and Argentina import over 90% of their fertilizers from Russia. In addition, Russia and Ukraine produce 30% of global wheat supply. Most of Middle East and Africa depend on Russia and Ukraine to produce its daily bread. A shortage of production for this particular commodity will lead to popular uprisings, even likely to regimes changes.

Even though the global economy has started bit better in 2022 than 2021, while the world economy still recovering from the Covid pandemic, the total growth was promising over 3% growth. But after the Russian-Ukrainian war in February, the expected trends are slowing down especially on the part of United States. Strong inflation with higher labour and commodity prices, all of which will push central banks in Europe and America to increase interest rates, and in china the slowing down, will be felt strongly almost to the anaemic level in 2023. In third world countries the shock will be felt strongly by over one hundred million people living on less then two dollars a day, all of which is going to stimulate the impulse of illegal migration from Middle East and Africa to Europe.

Finally: most notable is that the Russian war will end the era of globalization, which had kept inflation low for many years by free flow of trade across much of the world. That system had allowed the richest nations to enjoy easy access to low priced supplies, which helped many developed counties to maintain stable market and strong economies.

What is your solution for the above-mentioned crisis?

The nature of the current world crisis arises from the fact that liberal internationalism has expected non-western states to follow suit blindly, and that those non-western states would never dare to undermine or try to overthrow the post cold war system. In solidarity to cement the world order, United States and Europe had to stand as one column to ripe the benefits of the post Cold War system. This is a coalition that in fact was rigid and weak: liberal democracy appears fragile, polarized and vulnerable for right wing populism and backlash politics.

The current beneficiaries of the international order refuse adamantly to open or even to amend the international order to a more cooperative system – despite the fact that the world system is facing a constant rising of inequality and massive migrations spurred from economic stagnation in Middle East, Africa and Latin America. Liberal internationalism continuously perceives the world as a global field of manipulation of the powerful and wealthy. The current state of affair of the Russian-Ukrainian war and future wars, which might likely occur, will be born from the womb of the of great powers struggles between countries such as Russia, China, India, Brazil, who are not happy with the current international order.