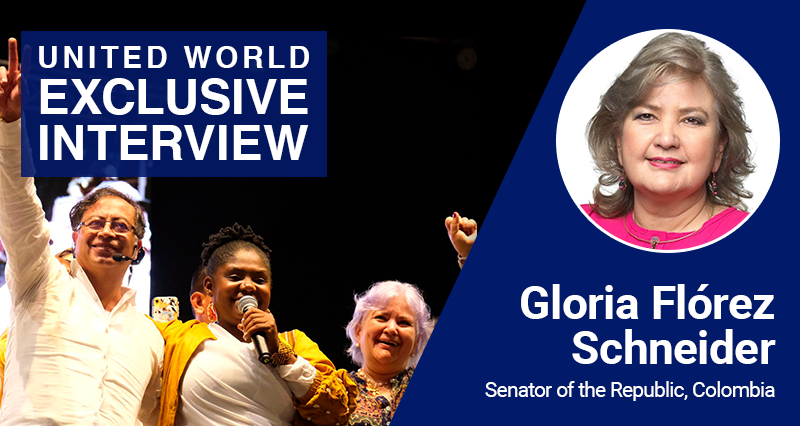 Colombia heads today, May 29 to presidential elections. Gustavo Petro, candidate of the Colombia Humana, heads to polls, but failing to pass the 50% threshold to win the elections in the first round.

The second round between the two leading candidates is scheduled for June 19. Ahead of the elections, we spoke with Gloria Flores Schneider, a member of the Colombia Humana, Senator of the Republic and close friend of Gustavo Petro about the country’s conditions and the proposal of Gustavo Petro.

How do you see the coming elections?

Gustavo Petro has received the approval of 8 million of votes in the primaries, receiving a historic support from leftist, progressive and patriotic forces. He is the response to the drama that the country is facing: the social explosion caused by the government of Ivan Duque.

Petro has called for a “historic pact”. This is an agreement of the society and the political parties to achieve a structural change of Colombia. This pact includes leftist, progressive, alternative parties as well as parts of the traditional sectors of politics, such as the liberal party. Even some conservatives joined the pact on regional level.

This call is an answer to the fact that the country cannot stand more violence. We have gone through 5 centuries of violence, from the colonization over the war of independence and the following civil wars in the 19th and 20th century. When he took over the government, Duque has started to undermine the last peace accord signed in 2016 and destroyed the hope for peace.

Duque’s arrival to power has returned the combination of politics and mafia to government, with a new increase in violence. Previously, all was legitimized with the hostility to the FARC. With its disappearance, new hostilities have been created to continue a politics of repression and death. Assassinations and massacres have returned to Colombia. The people reacted with a national strike in 2019 that was only ended to the covid pandemic.

But the pandemic revealed clearly the crisis caused by the politics of extreme right, which has served the oligopoly and the economically powerful, abandoning middle classes, small entrepreneurs or the peasants to their own destiny. This was accompanied by a surge of corruption and hunger, the latter symbolized by public points of food help.

Gustavo Petro has proposed his ‘historic pact’ on this background, that only a broad coalition of social and political forces can achive the transition to peace.

Who is against the peace in Colombia?

There is a variety of groups. For instance, the so-called Evangelistas, which represent a kind of neo-colonization of minds, have taken a very negative stance against the peace agreemen of 2016. Parts of the Liberal Party, with connections to former President Uribe, have also attacked the agreement.

Besides that, Colombia is for its location a geopolitically very important country. It is the entrance to South America, the connection between the Pacific and the Caribbean and the access point to Central America. Columbia has been used as the main platform against all progressive governments in South America: against Venezuela and Ecuador, against Brazil when Lula was in government there, against Bolivia…

And representatives of the United States government have always and officially said that Colombia was their main ally on the continent – in spite of the huge human rights violations that existed in our country.

And the country has turned into a mafia-dominated state. Sectors of the mafia have dominated parts of the public sector, managed for instance the health sector, controlled education system and managed trade relations. Due to the drug trafficking related illegal funds, the economy kept on going despite the huge economic crisis caused by the pandemic. Narco trafico here is not limited to trade of drugs; it includes an assassinations sector, arms trade, money laundering and so on.

Hence, all these sectors that are negatively affected by it, are against the peace in the country.

What happened to the peace accords?

The agreement was signed with the FARC guerilla. But suddenly, members of them began to get killed. It seemed as coincidence. But it continued with their members, who had laid down arms and entered the so-called centers of peace, centers of reintegration to society. They went to these centers, and then they died. They gave up weapons, and in exchange, they were killed.

Now there is a new guerilla group, which has separated itself from the FARC, and it refuses to lay down arms.

In addition, when the FARC abandoned territories under its control, other illegal armed groups poured in: from extreme right wing paramilitaries to cartels from Mexico such as the Sinaloa Cartel. This has created a much bigger violence, because these groups are beyond any control.

And some of these groups were used to kill leaders of social movements as well.

But that did not stop people from protesting?

Not at all: in 2021, there was another union strike in April, where people took to the streets in all the cities and villages, filling the squares. The Nation Committee of the strike even lost control of the protests to a degree. In some cities, such as Bogota and Cali, points of resistance were established.

How is the position of the armed forces?

There are important tendencies of change within the armed forces. Formerly, they were taught that every oppositional was an enemy of the state – the typical position on which all dictatorships in Latin America were built upon. But today, there are increasingly forces there that support the peace and reject orders that would destroy according steps.

The United States have been heavily involved into Colombian politics, not least with the so-called Plan Colombia, where US bases were and a comprehensive security agreement was established. What is the position of the “historic pact” in terms of relations to the United States?

And if we strengthen the tools of integration in our region, we will achieve a better position to negotiate relations with the United States, with Europe, with China, Russia or the rest of the world.

So, first of all, we want to revive the multilateralism. Secondly, we want to support and advance regional integration. Thirdly, we want to continue relations with the United States, but based on mutual respect for national sovereignty and for human rights. They also need to support the peace process in our country, they are a true factor of power. They need to be a fundamental actor for peace in the agreements within Colombia. This is very important, they need to be a guarantor force for the peace agreements we have in Colombia. We have to construct a new relationship together with them. And this construction of a new relationship with the United States is not just a matter of Columbia but of all Latin American countries.