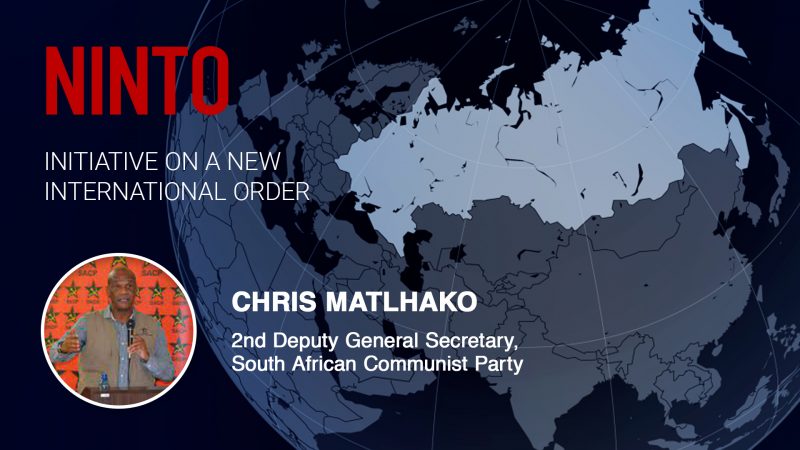 The Ukraine conflict is opening up debates about the current and future nature of the international system. Led by the US, Western countries frequently claim thar Russia’s military operation threatens the global “rules based order”. Hence, they do acknowledge that a profound change is taking place.

Others meanwhile claim the rise of a new, multipolar world order. This argument finds supporters all around the world outside its Western parts.

The Initiative on a New International Order (NINTO), inaugurated last year by the International Relations Bureau of the Turkish Vatan Party, has held an international online conference on May 7, dealing with this topic. The conferences title was: “The construction of a new world in the context of the Ukrainian military operation led by Russia”.

The following questions were discussed among others:

United World International will present in the coming days the speeches held on the conference. Today we present the speech of Chris Matlhako, Second Deputy Secretary of the South African Communist Party.

It is a great honour and privilege to be part of this platform. Indeed, we appreciate the efforts of many progressives across the globe – putting shoulder to the wheel to ensure, that illusive goal of genuine peace and the coexistence of peoples’ is realized, despite their various differences: whether these be geography, language, religion, race of creed – don’t stand in the way of our common objective of realizing a meaningful life and a rewarding cultural, civilizational, and environmentally sustainable development for all.

The conjunctural challenges manifesting today are demonstrating in many ways than one, that what the world needs, is fundamental restructuring of its institutional architecture and power relations at all levels. The multifaceted crisis impacts on all aspects of our lives. This restructuring must lead to a multi-plural and non-hegemonic world order. This has become an urgent task in the context of the Ukraine-Russia crisis.

And that is why Marx is crucial in this context and his general approach on what is now liberalism and neo-colonialism. Marx’s work was earth-shattering in understanding the world, because it suggests that if you go through liberalism, you can understand how the system operates. You understand the fact that a small number of people arrogate to themselves the right to hold property. They’re able to disenfranchise and make people go to war. They will hold sway on all the decisions and thinking. Critically, they’ll prescribe ethics, values and impose their thoughts on the entire globe and that’s what the world should embrace. Anything other than that, is punishable with war, illegal unilateral sanctions and demonization across the globe. There are just too many examples in the recent to point this out.

The principles of the Non-Aligned Movement (NAM) have more meaning today than ever before. The joint statement signed in December 1954, asserted, “ … the policy of non-alignment with blocs … does not represent ‘neutrality’ or ‘neutralism’, neither does it represent passivity as is sometime alleged. It represents the positive, active and constructive policy that, as its goal, has collective peace as the foundations of collective security.”

It is in this context that we must understand the position of much of the developing world, especially Africa at the UN General Assembly voting on the Ukraine-Russia crisis. Post-colonial Africa has continued to suffer under-development, disease, poverty and marginalization leading to precarious migrations across the dangerous Mediterranean seas in search of a better life. The ‘developed world’ instigation of instabilities across the continent in search of lucrative minerals, facilitated the ruthless exploitation and killings of millions on the continent. Those who opposed its rules and frameworks were killed – like Muamar Gaddafi of Libya.

The US and EU are constantly in search of markets to exploit in order to maintain their economies and countries (military) the strongest in the world and dictate to the world. The Global South has more than 80% of the world’s population, yet its countries are systematically and deliberately excluded from any decision-making in international organization, including the United Nation’s (UN) structures themselves. Key decisions are made in structures such as the G7, UN Security Council, etc excluding the majority of the world’s population.

The values and ethics of NAM can only come about, when the countries of the Global South build a critical mass. This ‘critical mass’ is beginning to shape in the developing and diversifying trade, finance and other relations between the continent and countries such as the Peoples’ Republic of China, India, Turkey, Iran, Russia, Brazil, Venezuela and others who have made significant progress in the recent past. Indeed, it would do the Global South so much good, if it would lead a process of a rethinking and conceptualizing the institutional frameworks for finance and financial flows, own-currency use for payment and mechanisms that will enable countries threatened with illegal unilateral sanctions to overcome these. All of this must be anchored on the principles of ‘solidarity and internationalism of NAM’.

“It is time to revitalize NAM;” argues activist Nontobeko Hlela in Globetrotter (May, 3 2022). “NAM will only succeed if the leaders of the countries of in the Global South put their egos aside, think strategically on the global scale and put their considerable human capital, natural resources and technological ingenuity to better use and advance the quality of life of their populations”, she argues.

From a global geopolitical perspective, the reasons the EU and US (and allies) are looking to shore up bilateral trade and investment across the continent, is bourgeoning ties and relations which excludes them and is led by the Peoples’ Republic of China’s penetration on the continent and their endeavours to stem the migration tide.

It is for this reason that we understand perfectly well the ongoing crisis in Ukraine – its history, origins and underlying basis and Russia’s ultimate decision to embark on a military program. By its own admission the US Security Department has revealed that the actual purpose of the exercise in the Ukraine is to weaken Russia and thus provide a basis to engage China for directly. This spells huge difficulties for humanity and the Global South into the future. This is why we think we must a keen interests in these developments and prepare for a post-Ukraine-Russia military crisis in order to have a better sense of how we engage with the world at that point and beyond.

It is our view that a renewed NAM has a real potential to build institutions and build buffers against the economic warfare of the US and NATO allies has been waging against countries such as Cuba, Venezuela, Zimbabwe, Eritrea, Iran and is now moving in on Russia. These institutions must ensure financial flows and other exchanges ensure autonomy from the US and EU financial centres and systems.

A large part of this will also mean rethinking our politics, economics and foreign policy. The economic weapons being brought about Russia in this period demonstrate how they will be use against others in the future.