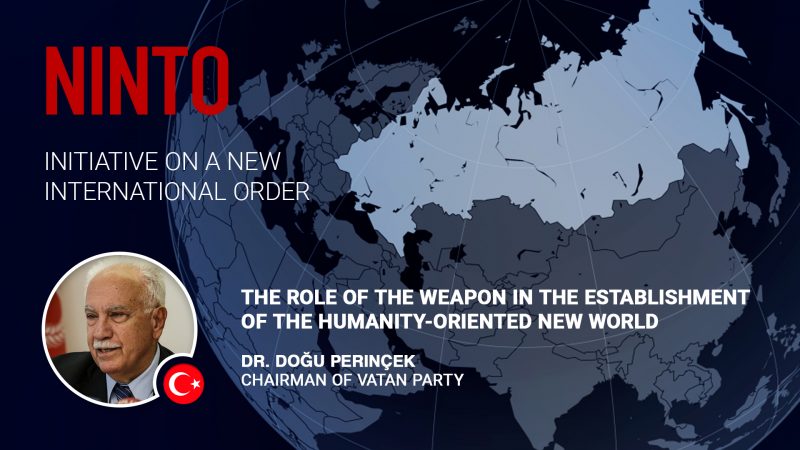 The Ukraine conflict is opening up debates about the current and future nature of the international system. Led by the US, Western countries frequently claim thar Russia’s military operation threatens the global “rules based order”. Hence, they do acknowledge that a profound change is taking place.

Others meanwhile claim the rise of a new, multipolar world order. This argument finds supporters all around the world outside its Western parts.

The Initiative on a New International Order (NINTO), inaugurated last year by the International Relations Bureau of the Turkish Vatan Party, has held an international online conference on May 7, dealing with this topic. The conferences title was: “The construction of a new world in the context of the Ukrainian military operation led by Russia”.

The following questions were discussed among others:

United World International will present in the coming days the speeches held on the conference. Today we publish the speech held by Dr. Doğu Perinçek, Chairman of the Vatan Party.

Russia’s Ukraine Operation is of historical importance. This operation makes a very important contribution to the establishment of the New Humanity-Oriented World from the view of armed struggle.

Russia said “stop” just in time to NATO’s expansion to the East. If this operation had not been carried out at this moment, it would have been too late. Because NATO’s settlement in Ukraine would bring the nuclear threat of the USA targeting Russia to the Russian border. The consequences of that would be severe for Russia, for our region and obviously for Turkey! With this operation, Russia struck an effective blow to the US threat on a world scale.

The war that brings peace

The anti-war, pseudo-peaceful, so-called humanitarian rhetoric launched in all wars has come up again. The warlords of the Pentagon, the bloody commanders of NATO, and the bankers of New York and London are shedding crocodile tears for children and the elderly in Ukraine.

The war is being cursed, and thus the imperialist war provoked by the USA is being covered up. They have been decorating their plans to expand eastwards with flowers. Mercy is used as an instrument to clean the blood on the hands of oppressors.

Looking at human history, we see that every peace is provided by weapon. It is the weapon that brings peace, protects that as well. That’s why so-called peace-loving pacifists are only selling dreams and are actually busy with pacifying the human forces that will bring the peace. This is the function of those shouting “peace” who wore Hitler’s boots after 1945 under the control of the USA.

The mercy which tolerates the cruelty of imperialism has put the blood shed for the homeland and the bloodshed for imperialism in the same tube.

The weapon that establishes civilization, makes revolution, liberates the homeland, and resists imperialism has been an indispensable component of every achievement in the name of humanity throughout history.

The war against imperialism is the war of liberation.

Currently, a front has been formed from the Black Sea to the Aegean, the Eastern Mediterranean, Cyprus, the Suez Canal, the north of Syria and Iraq, the Strait of Hormuz and the Oman Sea. Asian-based human forces are facing the USA and NATO on this front.

Ukraine and Greece governments are the instruments thrown into the fire against region countries in Black Sea and Mediterranean by USA and Israel.

Ukraine is Greece on the Black Sea.

Greece is Ukraine in the Mediterranean.

After Russia’s effective operation in the front of the Black Sea, Turkey gained a more secure position on the Eastern Mediterranean front.

Ukraine and Greece governments are the instruments thrown into the fire against region countries in Black Sea and Mediterranean by USA and Israel.

Armed struggles on the front line

If we identify the armed struggles against US imperialism on the Black Sea-Mediterranean-Oman Sea front, we will get to know our friends at the forefront of the human front.

The USA tried to dominate the world brutally with arms. Now, the Developing and Oppressed Countries of the World are overthrowing the imperialist throne of the USA with arms.

All these armed struggles make historical contributions to the establishment of the New World and the future of Turkey.

NATO expanding eastward is NATO advancing to its grave

Now everyone, friend and foe, should understand that: NATO expanding eastward is NATO advancing to its grave.

Western European states that are members of NATO are in a very difficult situation. The USA’s adoption of Hitler’s famous “Drang nach Osten” (Drive to the East) policy put European countries, especially Germany, in a very difficult situation. These countries are facing serious energy problems and the cost of living is rising. The discontent of people in these countries manifests itself.

As French President Macron admitted, “NATO is brain-dead.” NATO which is the organisation to keep the so-called allies of the USA under control is falling apart.

NATO generals are in the prisons in Turkey at the moment. The Turkish Army and Turkish people crushed the military coup of NATO’s Gladio on the night of 15-16 July 2016 with arms and thus liquidated the armed force of the USA within Turkey.

Recognition of Donetsk, Lugansk, Abkhazia and the Turkish Republic of Northern Cyprus

The recognition of the Donetsk and Luhansk People’s Republics, which were established in 2014, by Russia has stopped the expansion of NATO towards the East.The existence of the Turkish Republic of Northern Cyprus performs the same function in the Eastern Mediterranean. Recognition of the Donetsk and Lugansk People’s Republics in the Western Black Sea Region, the Republic of Abkhazia in the Eastern Black Sea Region, and the Turkish Republic of Northern Cyprus in the Eastern Mediterranean strengthens the front of humanity against US imperialism and thus makes a great contribution to world peace.

All the sanctioned countries of the world, unite!

The states of the world, especially in Asia, are faced with the responsibility of boldly determining the US-based threat and being aware of the confrontation in our region.

Those who remain neutral will be eliminated in the challenging process that we are going through.

No country should not participate in the sanctions that the Atlantic powers will attempt to impose against Russia.

The USA is actually isolating itself by imposing sanctions on 42 countries and stings itself like a scorpion surrounded by fire.

In this regard, today’s slogan is the following: All the sanctioned countries of the world, unite!

A New World is being formed

The New World is being formed on economic, armed struggle and political fronts.

On the economic front, the development of Asian economies, especially China, is the locomotive of the world economy. The Dollar Reign is falling apart. Liberalism slaughtered its brother, Humanism, just as Abel killed Cain in the scriptures. Imperialist-capitalism has turned into a mafia dictatorship of a handful of global finance gangs over all humanity. The wild system of exploitation and domination alienates humans from production, society, themselves and even their gender, and destroys the relationship between humans and nature. Humanity is faced with problems that cannot be solved with self-interest, private property and selfishness.

The liberation of humanity depends on public projects and collective ownership on a world scale.

On the political front, the “Great Eurasian Partnership Manifest” published in Beijing in February 2022 by the Presidents of China and Russia before the Ukraine Operation declared the front and values on which the countries seeking independence, democracy, prosperity and peace unite.

Turkish President Tayyip Erdogan’s statement at the United Nations meeting that humanity has entered the Asian Age is also of the same content.

Russia’s Ukraine Operation has added a new dimension to the front of armed struggle and has forced the USA to war on multiple fronts.

The claim of US imperialism to rule the future of humanity has failed.

The Atlantic Age lags behind.  Humanity is entering the Age of Asian Civilization.  Africa and Latin America form the wings of Asia.

A humanist, pro-public, sharing and peaceful world that guarantees the independence of nation-states is on the horizon of humanity.