Carrot and stick: US pressure and extortion to break Latin America’s ties with Russia and China 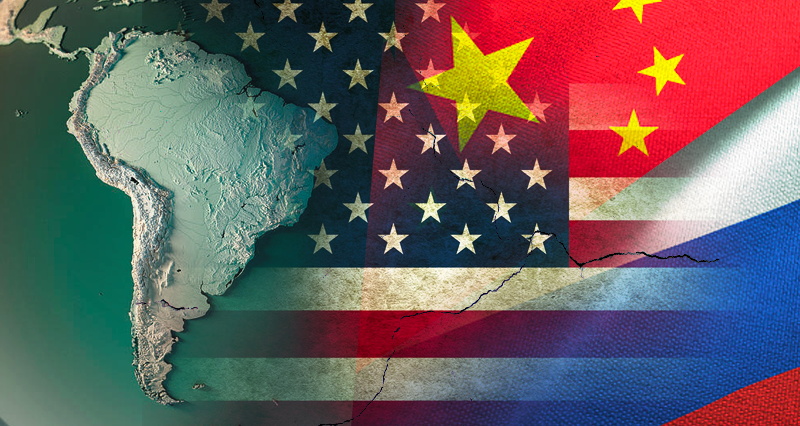 In the last two weeks, the State Department has deployed an ambitious blackmailing persuasion program on countries located in the so-called “Western Hemisphere”, with the aim of limiting their trade and cooperation ties with Moscow and Beijing. The proximity models deployed in Latin America and the Caribbean offer a wide menu of alternatives that range from threats and sanctions to the offer of better conditions for exports, guarantees for the continuity of remittances or for the extended authorization of visas.

On April 7, the Russian Federation was suspended from the United Nations Human Rights Council, as a result of the denunciations made by Ukraine regarding war crimes. The measure was carried out without surveys or investigations on the ground.

On April 21, it was decided to suspend Russia’s seat as Permanent Observer of the Organization of American States (OAS). In the first vote, Argentina endorsed the suspension, while in the second round, it abstained. While these two votes were taking place, the State Department tried – unsuccessfully – to expel Moscow from the UN Security Council.

Last Wednesday, Treasury Secretary Janet Yellen invited the G20 finance ministers to boycott the speech by Anton Siluanov, head of the Russian finance ministry. The Argentine representative at the meeting held in Washington rejected the boycott and remained on his bench, along with 16 other officials. The only three representatives that left the deliberations were Yellen herself and the ministers from Canada and the United Kingdom.

At the press conference, Yellen justified the limited success of the proposed boycott: “To expel a country from participation really requires a very high level of agreement in many forums, including the G20, and tn that session, that level of agreement was not present.”

The offensive of sanctions, boycotts and blockades is directly related to the purpose of weakening any country that defends its sovereignty against the rules imposed by the United States, and/or that seeks to articulate alternative commercial blocs to the one configured by Atlanticism.

That was the geopolitical cause for which the ancestral conflict between the Ukrainian and Russian nationalist sectors was stimulated: it sought to prevent the constitution of a Eurasian continental geopolitical axis, capable of articulating Western Europe with Southeast Asia, placing Moscow as a nexus between both continents. Once at war – previously incited –, the highest authority of the US Treasury proposed the next steps: “The earnings from the sale of oil and gas is an important source of income for Russia. It would be very useful to find a way to reduce that income.”

Washington’s offensive is related to the surprising failure of its sanctions: despite the fact that Russia was separated from the SWIFT system and foreign reserves were frozen, the value of the ruble stabilized at values similar to those exhibited prior to military intervention; Russian gas, oil and coal continue to be shipped to Western Europe; and the Central Bank continues to increase its international reserves. During the last week it added 1,700 million dollars, reaching the sum of 611,100 million. That is the reason why on April 13 the spokeswoman for the White House, Jen Psaki, advanced the request for the exclusion of Vladimir Putin from the next G20 summit, to be held between November 15 and 16 in Bali. To reinforce the pressure, the head of the Treasury held a meeting last Tuesday with the Finance Minister of the Republic of Indonesia, Sri Mulyani Indrawati, to whom she demanded the removal of the Russian President from the list of guests for November.

The State Department’s attack is aimed primarily at Latin America and the Caribbean (LAC). In mid-April, officials close to Anthony Blinken connected with the Argentine ambassador in Washington to urge him to question Putin at the UN Human Rights Commission. The decision to accompany Russia’s suspension proposal from said institution was decided by Alberto Fernández, Gustavo Béliz and Santiago Cafiero after the intimidation of extortion insinuated in relation to the continuity of the agreements with the International Monetary Fund.

A similar attack has been observed during the last two weeks against the Mexican government, questioned by Washington for its neutrality regarding the Russian military intervention. The irritation of the Biden administration against Andrés Manuel López Obrador (AMLO) was expressed in context to the nationalization of lithium – approved during the last week by Parliament – and the approval of the Electricity Industry Law, endorsed by the Supreme Court of Justice. A week before these rulings, the former head of Barack Obama’s State Department and current head of the White House climate agency, John Kerry, warned that the new electricity legislation would generate “deterioration of the environment”, and that its application would result in an exclusion of US companies investing in Mexico. AMLO reported – after his meeting with Kerry – that Washington intended to “impose a group to monitor us, to observe [the debates on electricity regulations ]. Nobody allows that. Maybe in other times, with submissive governments, submissive, but these no longer the times of before.

The disappointment over the new electricity regulations adds to the danger – conjectured by US officials – of a potential use of Mexican lithium by Chinese companies. The nationalization of the mineral was approved last Tuesday after its international price increased by 400% in the last year. Lithium is one of the core components of the batteries needed to manufacture electric vehicles. The automotive company Tesla – owned by mega-millionaire Elon Musk – appears as one of the promoters of diplomatic and coercive pressure to guarantee said input and prevent these resources from promoting competition from cars produced by Beijing.

The production of the mineral would have to increase by 500% until 2050 to be able to face the productive reconversion that is intended for the automotive industry. The United States Geological Survey quantifies its neighbor’s holdings at 1.7 million tons – 2.3% of world reserves. The leader is Bolivia, with 21 million, and Argentina appears in second place, with 19 million. On July 24, 2020, Musk responded to an accusation about his participation in the coup against Evo Morales, promoted and endorsed by the State Department: “We will overthrow whoever we want.” According to Kenneth Smith, an embassy contractor, Washington and Ottawa could challenge the nationalization of lithium in Mexico since it violates some of the agreements reached in the T-MEC (Free Trade Agreement signed by Canada, Mexico and the United States). The underlying issue is the fear that China may access some portion of that value chain, or buy its product directly from the state.

The offense is not only against Mexico or Argentina. The White House has openly repudiated the neutrality of the BRICS (economic and political alliance of Brazil, Russia, India, China and South Africa) in relation to the military intervention in Ukraine. However, last Tuesday, Jair Bolsonaro’s Minister of Economy, Paulo Guedes, responded to the State Department by announcing that he would propose the Argentina to join the New Development Bank of the BRICS group. The Biden administration’s attack was also frustrated in Panama, where Antony Blinken and Alejandro Mayorkas, Secretaries of State and National Security, were present. The visit sought to promote some type of restriction on ships carrying Chinese or Russian products through the canal, but their requests were not granted. In the case of Honduras, despite the resistance of the Xiomara Castro government, the financial dependence on remittances from relatives residing in the United States imposed an alignment with the situation in Ukraine.

Venezuela is paradoxically one of the most favored. Given the sovereignty acquired by that country since 1999, Biden lacks extortion mechanisms (political, commercial or military), while imploring to dump barrels of oil on the international market to avoid the global inflationary spiral. The same was attempted with Saudi Arabia, a country that was asked to increase oil production in order to lower its price and thus undermine Moscow’s ability to obtain resources. The kingdom, however, refused to increase production.

In the case of Cuba the situation is ambivalent. For the first time since 2018, meetings between US and Cuban officials were held on April 21 to give continuity to the migratory agreements broken by the Washington authorities in the last four years. These meetings granted by the Biden administration seek to decompress the levels of confrontation with Latin America and the Caribbean – while continuing to extort money – to reprioritize what Democratic think tanks call the “Eurasian emergency”. However, the sanctions against Putin seem to make a bigger dent in Russia’s partners than in Moscow: in early February a freighter left Russia with a delivery of 19,526 tons of wheat for Havana. The Russian ambassador in Havana, Andréi Guskov, explained that the delay was due to the disconnection of several Russian banks from the SWIFT system, which prevented the freight from being paid.

Who does not seem to have this type of problems is Colombia, the only country that follows Washington’s recommendations to the letter. While Iván Duque continues without giving explanations about the daily massacres of social leaders and peasants, his authorities automatically join in all the measures and speeches requested by the White House. On Thursday, the spokeswoman for the Ministry of Foreign Affairs of the Russian Federation, María Sajárova, highlighted in a statement that “we take note of the statements made by the President of Colombia on Russian-Colombian relations. We regret that he made them in the spirit of the negative rhetoric imposed on other countries by the United States government.”

The attack against China – promoted by Washington – includes carrots and wishes: the governments of Latin America and the Caribbean are repeatedly told that in the future, they will be able to replace segments of the supply chains, today controlled by China, heralding a new stage of relocation (nearshoring). A move that would boost the growth of the subcontinent, if they are capable of offering reduced internal markets and meager wages.

The model promoted by the Biden administration is that of a permanent fragmentation of the world economy, with two alternative circuits of trade and international cooperation based on geopolitical blocs. To achieve this goal, it must strive to sever solid ties and prevent – simultaneously – Eurasia from failing to escape imposed apartheid.

The novelist Henry Miller slipped, shortly before his death, a doubt that sharply worries international analysts: “My only doubt is to know whether the United States will end the world, or the world is going to end the United States”.

* Professor at the University of Buenos Aires. This article previously was published in spanish on Diario y Radio de Universidad de Chile.