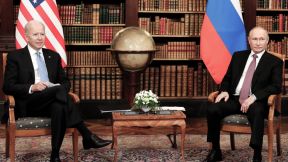 United World International expert Fabrizio Verde provided an interview to the Iranian daiy newspaper Tehran Times on the global repercussions of the Ukraine conflict. Below we present to our readers the interview as published on Tehran Times.

The director of the online newspaper L’antidiplomatico says that the Ukraine war will change the geopolitical order of the world.

“What happens in Ukraine breaks the global geopolitical and financial dominance of the United States and the Western bloc,” Fabrizio Verde tells the Tehran Times.

“Russia has openly challenged U.S. unipolar hegemony, which has long been crushing under its iron heel even what was once the great European civilization,” Verde adds.

The Italian expert is of the opinion that the sanctions imposed on Russia by the Western bloc would cause a general weakening of these countries and even NATO.

“So with a weaker NATO, a broader partnership between Germany, France and Russia could be achieved. The excessive use of sanctions and especially their use against Russia since 2014 have led to a self-sufficient Russian economy that is 80 percent self-sufficient in consumer goods and impressive technological advances in the oil and gas sectors,” he argues.

“Moscow also benefited greatly from Chinese cooperation which enabled it to offset the impact of sanctions.”

The following is the text of the interview:

Western countries call Russia’s attack on Ukraine an invasion while the Kremlin describes it as a special military operation. Whatever we call it, what are the causes of such a dramatic situation?

In Western countries where we have the bleakest Russophobia, the mainstream media and governments insist that Moscow treacherously invaded Ukraine and waged war on Kiev. In reality, Russia has not started a war, but as announced by President Putin himself in his speech to the nation on the night of February 24, Russia started a special military operation aimed at demilitarizing and denazifying the Kiev regime and protecting the Donbass. This may seem like a minor or merely semantic issue, but in my opinion, it is not, because it is the basis for the pro-NATO warmongering propaganda that is sweeping the Western world and occupying all the media space without admitting dissident voices. I think that the causes and responsibilities of the tragic turning point in Ukraine are to be found in the policies of the United States and NATO. Arms and instrument through which the United States controls Europe.

“The world is changing rapidly, and with its alliances and geopolitical alignments.”

When the Soviet Union implosion occurred, the Western bloc assured Russian leaders that NATO would not advance an inch. Instead, the Atlantic bloc has gone as far as the borders with Russia, which is so backward that it has its back to the wall. Furthermore, the United States has turned Ukraine into an anti-Russian outpost, a military and even a biological threat to Russia on its doorstep. While Kiev was carrying out a genocidal policy towards the populations of the Donbas initiated after the fascist coup of 2014, trying to deliberately annihilate all that is Russian. Here we come to the direct involvement of the West in Ukraine, which began with the Orange Revolution in 2004, and then culminated in the illegal removal of a democratically elected pro-Russian government and its president through a coup that had the support and involvement of Western powers.

Putin viewed the overthrow of a legitimate government and Kiev’s membership of NATO as crossing the red line. He immediately took control of Crimea, which he thought would rightly become a NATO naval base. This was the beginning of the Russian determination to create a buffer between NATO and Russia with neutral Ukraine. Finally, I believe that to understand what is happening today we must look backward. The break-up of Yugoslavia by NATO and the creation of Kosovo in 1999 demonstrated the weakness of international law and the United Nations. It was a humbling experience for the Russian Federation, as there was no Security Council resolution approving action on a fabricated charge of genocide.

How may the Ukraine war change the current world order?

As stated by President Putin, Russia has decided to fight for its sovereignty, for the right to be and to remain in Russia. What happens in Ukraine breaks the global geopolitical and financial dominance of the United States and the Western bloc. Russia has openly challenged U.S. unipolar hegemony, which has long been crushing under its iron heel even what was once the great European civilization, that is, the current non-sovereign European Union, actually dominated by NATO on behalf of Washington. It is very likely that the sanctions imposed on Russia by the Western bloc, and only by the Western bloc, will cause a general weakening of these countries and even of NATO. So with a weaker NATO, a broader partnership between Germany, France and Russia could be achieved. The excessive use of sanctions and especially their use against Russia since 2014 has led to a self-sufficient Russian economy that is 80 percent self-sufficient in consumer goods and impressive technological advances in the oil and gas sectors. Moscow also benefited greatly from Chinese cooperation which enabled it to offset the impact of sanctions.

Russia and China have already begun to question the dollar’s role as a reserve currency and are looking for alternatives. Much of the Chinese and Russian trade is now conducted bilaterally. ASEAN has also started to trade more and more in their own national currencies. In this regard, hypotheses of payment in rupees or rubles for the oil that Russia supplies to India are being studied. While Venezuela advances in the implementation of the Mir payment system of the Eurasian country.
We can put a tombstone on the theory of the so-called “End of History” the American political scientist Fukuyama proposed at the fall of the Soviet Union. History has started up again, change is already underway, it happens before our eyes. This is why war propaganda is so strong, and even timid dissent is silenced and criminalized in what, against all evidence, still insists on calling itself a free world.

The unipolar order dominated by the United States has now reached its end credits. At the end of the Russian military operation in Ukraine, humanity could finally enter a new era marked by multipolarity and the rise of the Eurasian powers.

How do you see the global alignments when it comes to the Ukraine war? While Western powers condemn Moscow, apparently the Eastern states are reluctant to denounce Russia.

Let’s take a map and we’ll have a clear picture of the situation. The United States and Washington’s vassal countries, the so-called Western bloc, condemn Russia, while the rest of the international community has decided to remain neutral or to support Moscow. Let us then look at the vote on the resolution condemning Russia tabled by the Western bloc at the UN General Assembly: we have two iron allies of the U.S. such as Saudi Arabia and the United Arab Emirates together with the two largest economies in South America, Mexico and Brazil, South Africa together with India and China who did not support the resolution. Together they make up 85% of the world population. In this scenario, where Europe, as we have seen, has no sovereignty and follows Washington’s geopolitical and economic agenda, there is a Russia increasingly oriented towards Asia.

The partnership with China continues to flourish and the two countries are the leaders of the new multipolar order. Then we have another large country like India which, despite the pressures, has decided to continue its military cooperation with Moscow and will buy oil and coal from Russia using a new scheme that provides for payments in Rupees and Rubles, thus bypassing the dollar. Among other things, Indian coal imports could completely absorb the missed exports to the European Union. Like India, Pakistan has decided not to condemn Russia despite very strong pressure. His former Prime Minister Imran Khan denounces being disheartened in Parliament for his pro-Russian stance that would have infuriated Washington. In short, as previously stated, the world is changing rapidly, and with its alliances and geopolitical alignments.

How do you see the role of mainstream media in characterizing this war?

The mainstream information circuit in the scenario of Russia’s special military operation in Ukraine acts as a megaphone for NATO’s war propaganda. The mainstream media are therefore broadcasting Western intelligence leaks, baseless news, unverified news, real fake news. The whole Western media apparatus, instead of providing correct information, is in this phase subservient to the narrative imposed by NATO and functional to Washington’s geopolitical interests. The mainstream has also decided to put a lot of emphasis on the emotional aspect of information. Public opinion is thus confused and almost paralyzed. People, blinded by terrible images and false stories, are no longer able to reflect, ask questions, and try to understand how and why this situation has come about.
In this way, the mainstream media help Western governments to spread Russophobia and prepare the ground for an eventual escalation of the conflict.

What are the global fallouts of sanctioning Russia?

We can say that if the U.S. and its Western vassals wanted to bring Russia to its knees by imposing extensive sanctions packages, the strategy failed. Just as if they wanted to provoke regime change to oust Putin, they have also failed. On the contrary, the Russian people seem to be clinging even tighter to their president.

In Europe, we are seeing that after the proclamations of the various leaders, the reality is setting in and governments are realizing that there would be big repercussions if they really were to decide on a total embargo on Russian gas and oil. The sanctions against Moscow are proving to be a real boomerang for those who imposed them. Most of the international community is not hiding its irritation at the behavior of the U.S. and the Western bloc. Beijing has called the sanctions “reckless”, a geopolitical maneuver by Washington that has had a major impact on the world economy and severely affected the most vulnerable countries. Venezuelan President Nicolas Maduro stressed that the sanctions imposed against Russia had generated a “boomerang effect” by affecting the economies of Europe, the United States and the world in general. They have caused “record inflation” in several countries and have “affected” the price at which a number of products are sold and purchased globally, such as wheat, oils and soybeans.