The new US strategy on Libya threatens Turkey and Russia 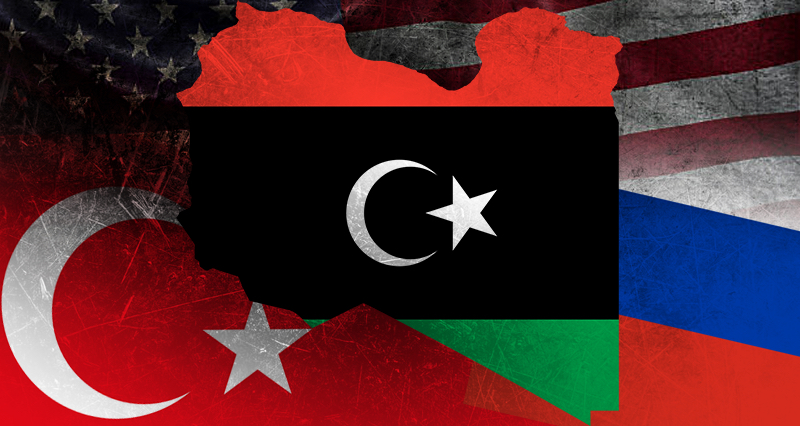 The US is getting prepared to enter more forecfully into the equation in Libya, while the power struggle between Dbeibeh and Bashagha continues. Oil is the first leg of the new plan of the USA, in which Bashagha voluntarily inquires a role. In this situation the Government of National Unity (GNU) and the House of Representatives (HR) have no choice but to put the national interests of the country before their election. Turkey and Russia, whose interests are threatened, need to find a joint path for a solution.

The Biden administration launched its 2020 United States Strategy to Prevent Conflict and Promote Stability, also known as the Global Vulnerability Strategy on April 1st.[i] and published a new roadmap for it. The US explains why it needs a 10-year plan, which it announced to start to implement in some countries, including Libya, as follows: “International armed conflict and state instability in particular pose threats to the American people, United States interests at home and abroad, and United States allies and partners. Amid this instability, adversaries and malign actors can prey on weak governments, exploit their populations, build influence, and advance their own narrow interests or extremist ideologies.’’

The strategy document clearly states that by “enemies” and “malicious actors”, Russia and China are meant: “Fragility can enable authoritarianism, external exploitation, and increase the influence of the United States’ competitors in both physical and digital realms. Weak states are much more susceptible to Russian and Chinese coercion. Through its Belt and Road Initiative, China has saddled many states with unsustainable debt, environmental degradation, increased long-term dependencies, and perpetuated fragility.’’

So, how will the US, which has declared that it will not actually invade like before in Iraq and Afghanistan, implement this new strategy? In the strategy document, these tools are listed as follows: Diplomacy, foreign aid, defense support and security cooperation, trade, investment, sanctions and other financial pressure tools and strategic communication. In order to implement its new strategy, the US declares that it can use all weapons suitable for the “carrot-stick” policy, including arms supplies, media funding, financing local partners and imposing sanctions on those who oppose Washington.

The four countries and one region where this strategy will be primarily implemented were announced by the US Secretary of State Antony Blinken:

Haiti, Libya, Mozambique, Papua New Guinea and the West African coastline (Benin, Côte d’Ivoire, Ghana, Guinea and Togo.) These countries will be the focus of new congressional funds allocated under this strategy. Congress has authorized up to $200 million per year for the Prevention and Stabilization Fund and has allocated $125 million for fiscal year of 2022. Most of the funds raised this in this fiscal year will be used to develop and begin implementing the 10-year plans.

Bashagha is ready for the job

The summary and adaption of this new strategy to the Libyan reality is as follows: The US is preparing to make military and financial “investments” on its local partners in order to exclude Russia, to impose sanctions on local elements that do not cooperate with it, and to increase its weight in the Libyan equation significantly.

Fethi Bashagha, who was elected Prime Minister by House of Representatives, was the first to react to the US project. According to Asharq Al- Awsat’s report in Arabia, Bashaha said: “The Libyan people welcome the opportunity to work with the US State Department to promote stability locally and in the region”.[ii]

The first step of the strategy: the oil plan

Simultaneously with the announcement of this strategy, the US Ambassador and Special Envoy to Tripoli, Richard Norland proposed the establishment of a new mechanism for the management of oil revenues until a consensus on political issues was reached: “Working with our partners in the Berlin Process Economic Working Group, the United Nations, Europe and with Egypt, we propose that a to manage oil revenues in Libya until agreement on broader political issues is reached. Under this mechanism, it is envisaged that funds will be spent with transparency and accountability only on salaries, subsidies, oil production, and important imports such as food and medicine.”[iii]

‘Interference to our sovereignty’

According to GNU Oil and Gas Minister Mohammad Avn, Norland ‘s proposal aims to interfere with Libya’s sovereignty: “ Unfortunately, these offers from outside, has buyers inside. We consider making such offers from outside as an intervention to our sovereignty. If the international parties do not try to remove the Libyans from the decision centers, this problem will be solved by itself because oil belongs to all Libyans, not to any political party.”[iv]

After Blinken’s proposal for an international mechanism for oil, Stephanie Williams, UN Secretary-General’s Special Adviser to Libya, made statement about the merging of the two central banks in Libya, cooperation with the National Petroleum Corporation (NOC) and other institutions, the oil flow is restored without interruption or exploitation and also made a statement regarding the continued support of international organizations to Libyan institutions for the purpose of implementing economic reforms in Libya, including supporting the maintenance of the flow level.

Put in to action

It is remarkable that these statements came in the process when an alternative to Russian oil was sought due to the Ukraine operation. Let’s remind; At the end of 2019, Haftar ‘s troops had completely stopped oil production in Libya, and even at that time, Libya’s oil had not been able to enter the agenda of the United States and the UN to this extent. This growing “interest” of the USA in Libyan oil finally seems to be popular topic in the country. National Petroleum Corporation has stopped production and exportation at the El Sharara and El-Feel oil fields and Zeytuna Port on the grounds of “force majeure”.

Let’s take a brief look at the Libyan politics in order to understand how “Force majeure” was created step by step : In Libya, where there are two power centers based in Tripoli and Benghazi , political and military forces have been holding reconciliation meetings for two years under the surveillance of the UN. During the political meetings in Geneva, it was decided to hold the presidential and parliamentary elections in the country on 24 December 2021, but the elections could not be held on the scheduled date. The House of Representatives in Tobruk elected Fathi Bashagha as prime minister on February 10, in a session where most of the deputies in the west of the country did not attend, on the grounds that the current GNU’s mandate expires on December 24, 2021. On March 1st, they gave a vote of confidence to the Bashagha government. GNU Prime Minister Abdul Hamid Dbeibeh, on the other hand, accused the House of Representatives of deviating from the program which was determined in the Geneva Agreement and said that he was in charge and that he would hand over his position only to an elected government.

Bashagha has not been able to take over the government by going to Tripoli till today. Although he has certain influence over the militias of the Libyan army, the Turkish military elements that stopped the Haftar troops in front of Tripoli and pushed them back are still in the picture. Haftar -backed Bashagha, who does not find the military option realistic because of the Turkish military presence, claims that he will take over the government “peacefully”.

For this “peaceful way”, the Haftar side withdrew from the Military Committee meetings that it had been holding for two years with the Tripoli government.

As a result of the 5+5 Joint Military Commission meetings held in Geneva on October 19 to 23 in 2020, a permanent ceasefire agreement was signed between the GNU and the delegations affiliated with Haftar. Since that date a solution is sought for the unification of the Libyan army in the meetings. The five-person delegation within the Military Committee that supports Haftar announced on April 9 that they “suspended all their work in the committee until their demands are considered.” The delegation also demanded Haftar to stop oil exports, suspend domestic flights between the west and east of the country, and close the coastal road.[v] The political discussions that started in Cairo were also suspended until the end of the holyday, after the Joint Military Commission collapsed.

After Haftar’s side broke agreement with their statement “stop oil production”, the areas where the oil fields are located were invaded by armed protesters, and the Libyan National Oil Corporation announced that production and exports had stopped at the El Sharara and El-Feel oil fields and the Zeytuna Port. The NOC’s statement said that an armed group entered the El-Feel oil field and prevented workers from continuing production.[vi] It is reported that Libya loses every day 36.6 million dollars due to the halt of production at these two fields. The disruptions in oil production are putting the GNU in a difficult position. The fact that the two closed oil fields and the port are located in the areas under the control of Haftar’s troops indicates that Bashagha, who demanded a role in the US plan, is trying to pressure Dbeibeh. Thus, two things will happen: the national plan initiated by GNU with the aim of increasing oil production will fail, and the US proposal of “international mechanism” will become a necessity.

If the mechanism is established…

95 percent of Libya’s national income is based on oil. A possible “international mechanism” to be built on this income would mean “financial occupation” of the country. Norland stated that the mechanism will decide where the oil revenues are spent. This means, the mechanism will control almost all of the country’s revenues. The Libyan government will not be able to invest in defense or purchase weapons from a third country. This way, this strategic country of the Western Mediterranean will be under the full control of the USA.

The only realistic solution

This scenario threatens the interests of Turkey, which has important military and commercial agreements with Libya. For now, the USA is not fully positioned against Turkey in Libya because it did not have the power and influence to do this, and Turkey’s presence in Libya was beneficial for US, since Turkey supported GNU against Russia, which supported Haftar. However, the cards have been shuffled on the field for a while, and it should not be forgotten that the USA leads the alliance against Turkey in the Eastern Mediterranean. Turkey should cooperate with Russia. The two country’s interests do not always coincide, but at least to not contradict each other. This cooperation should be directed against the United States, which has completely opposing interests.

The biggest obstacle in front of this cooperation and a political solution is Haftar, who does not hesitate to put the oil card on the table whenever he is cornered. However, Russia had strike out the Haftar when he left the ceasefire talks in Moscow in June 2020 without any explanation. It is now more realistic than three years ago to exclude Haftar who no longer has the power, from the equation. In Libya, where Haftar is not a political option, a political reconciliation under the guarantor of Turkey-Russia seems to be the most realistic solution. The GNU under protection of Turkey on one side and the HR under protection of Russia on the other can find together a solution that will get Libya back on its feet. The two countries tried this model in Syria, and it was the only way that succeeds compared to all other initiatives.