Recent Middle Eastern Meetings: Each marching to the beat of their own drum 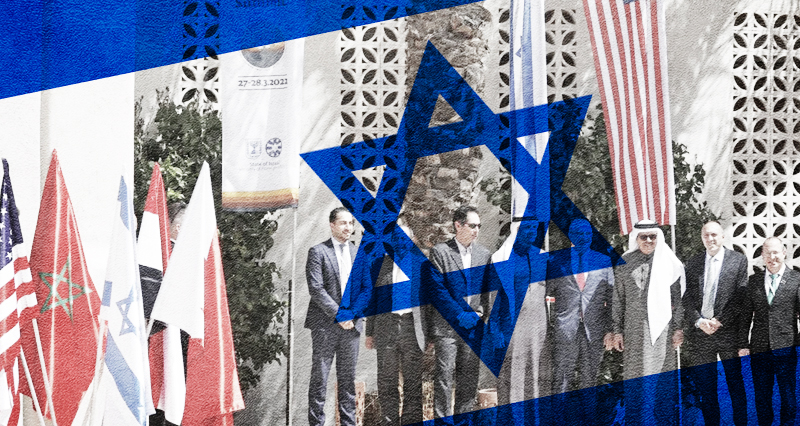 In recent weeks, the Middle East region has witnessed a number of meetings and summits that have raised eyebrows and questions, against the background of their multiplicity, diversity and the nature of their parties.

The Egyptian minister’s participation was not announced in advance, which may mean that it was decided at the last minute. Although it was said that the delay of the announcement was caused by Egypt’s objection to the meeting being held in the city of Jerusalem, given that this was an acknowledgment of Israel’s annexation of the city in violation of international legitimacy. It was said that because of this objection, Israel was compelled to move the meeting to the Negev desert.

Observers had difficulty understanding the nature and objectives of these meetings, especially since no closing statements were made. The most surprising thing is that each party came out with different statements that sometimes contradicted the statements of the other parties.

In light of this ambiguity, some have exaggerated by saying that these meetings pave the way for new alliances in the region, in which Israel will be a major component, after its decades-long isolation. At the same time, others downplayed the importance of these meetings, considering them to be nothing more than pictures and messages for some international and regional parties, specifically Washington and Iran, in light of what is being reported about the imminent conclusion of a new nuclear agreement with Tehran.

Superficially, the countries that participated in all the meetings with Israel do not agree with each other, at least in public. Some parties did not mind meeting in Jerusalem, including those who did not mention the Palestinian issue at all and seemed friendly toward Israel, while Egypt refused to meet in Jerusalem and talked about the necessity of solving the Palestinian issue and implicitly denied the idea of an alliance against Iran.

Such differences do not give any indication of the emergence of any regional organization, such as the one heralded by Israel at the end of the Negev meeting. On the other hand, there are fallacies in what is reported about such an organization. It was said that this alliance or organization represents a response to the United States’ abandonment of the Middle East and the Gulf region in particular.

In fact, Washington has not abandoned the region, since US bases still exist in the Gulf states. It is unlikely to be dismantled in any short or medium term. Even in the case of the emergence of such an alliance or organization, it’d be inconceivable that it would dispense with American support or arms.

In terms of content, and in light of the various statements issued after these meetings, it seems that these meetings are nothing but general and superficial discussions that do not focus on a specific subject. From the perspective of the parties attended, those meetings were, at best, an exchange of opinions on a number of issues of varying importance,

The Egyptian presidency did not reveal the content of the bilateral meeting between Sisi and Bennett, although it announced that the separate bilateral summit between Sisi and bin Zayed discussed the situation in the Arab region and the importance of strengthening Arab solidarity in facing common challenges.

Although the Israeli media said that the bilateral meeting focused mainly on the Iranian nuclear issue, Egyptian sources stated that the talks were about the ways to help Cairo in providing the country’s need for grain, especially wheat, whose crisis has worsened with the intensification of the Russian-Ukrainian war.

However, the same sources said that the tripartite summit directly addressed the security and economic interests of the three countries, including the Iranian nuclear issue, the three capitals’ tense relations with Washington and the controversial Renaissance Dam of Ethiopia.

Despite the hasty manner in which the Triple Summit was arranged, it sets a precedent that has never happened before. Whatever its consequences and the nature of the discussions, it appears to represent an attempt to coordinate positions between the three capitals regarding the developments related to the repercussions of the Russian war in Ukraine, and the Western attempts to revive the nuclear deal with Tehran. Because these two issues raise huge repercussions in the fields of energy, trade and regional security.

Therefore, it can be said that the Sharm el-Sheikh summit, and the meetings followed, are only a response to these developments at a time while the relations of many countries in the region are witnessing a security cool-down with the United States. Along with the dispute over classification of some groups in the region as terrorist groups, or the seizure of some US military technology and equipment, many are concerned about the imminent revival of the nuclear deal with Tehran, without controlling Iran’s aggressive regional policies, as well as the rumors that the Iranian Revolutionary Guards will be removed from the lists of terrorism.

In my opinion, the biggest winner from these meetings is Israel, which was able to send, through the language of pictures and messages, a pressure message to President Joe Biden’s administration to take control of the Iran nuclear deal and succeeded in presenting the Iran nuclear deal. And also it presents its efforts and capabilities in the Middle East as a complete or partial alternative to the American security cover, or as an effective and influential channel in the American arena to avoid further aggravation in Arab relations with the Biden administration as well as rescheduling Arab priorities so that the Palestinian issue is reduced to the lowest possible level.

As for the UAE, the meetings were part of its plan to reset its relations with regional powers and end polarization, a policy it recently adopted to address the tension in its relationship with Washington. The last period witnessed signs of improvement in relations with Turkey, as it received Syrian President Bashar al-Assad, and allowed meetings between its prominent officials and Iranian counterparts.

As for Egypt, in light of the economic crisis and the trouble with the Ethiopian Renaissance Dam, it tried to find out, at this summit, what to do without making serious concessions that go beyond the language of the image.

In general, things are still unclear, and it takes more time to recognize that there are fundamental and stable transformations exist. It is true that there is Middle East is dissatisfied with US security policies, and that some want to compensate for the US security cover or support it with regional security arrangements. But I don’t think the United States minds that.

Therefore, the participation of US Secretary of State Tony Blinken in the Negev summit may have been an attempt by Washington to ease the tension caused by Biden’s policies in the countries of the region, which was evident in their positions on the Russian-Ukrainian war. These countries have taken steps contrary to the American Western plan to isolate Russia internationally, as they refrained from engaging in any economic, political or diplomatic sanctions against Moscow. On the contrary, the UAE refused to vote against it in the Security Council, in the first announcement of the difference of accounts and interests between the countries of the region and US.

The second feature of this tension was evident in the energy issue. Before the summit there were several failed attempts by the United States and its Western allies to urge the Gulf to increase its oil supply.

Upon this request, there was a warm welcome reception for the British Prime Minister in Saudi Arabia and the Emirates.

This issue is the subject of the US Secretary of State’s visit to Algeria, which aims to persuade it to return its gas and oil exports to Europe, and to increase its production in general. This visit hits the most important goal of the Moroccan presence in the Negev summit, as Rabat wanted American pressure on Algeria on the Sahara issue.

Thus, Washington is seeking to revive the nuclear deal with Tehran, which will open the doors to Iranian oil exports in global markets and reduce prices. But this contradicts the desire of Israel, the UAE and Bahrain to form an alliance to confront Tehran and tighten the screws on the Iran-backed Houthi group in Yemen, which is the exactly opposite of what Washington is currently working on.

The Sharm el-Sheikh summit, and the meetings that followed, made a bang in the language of the image, but neither party has achieved and will achieve it’s aspirations for results and interests, because their goals are contradictory to the extent that they do not exceed more than taking pictures. Each of them was marching to the beat of its own drum.