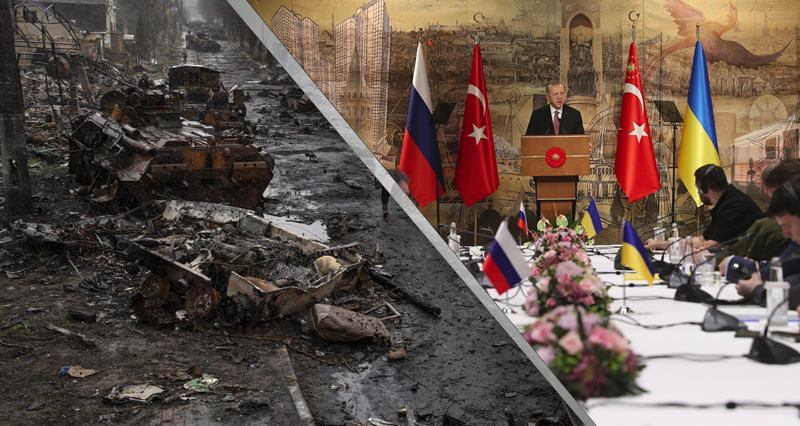 The photos of the Ukrainian city of Bucha have become the main topic in the global public opinion. The Russian side has rejected all accusations very decidedly and pointed to a Western organized provocation. Russia has called for an urgent meeting of the UN Security Council on the incident. But the other members of the UNSC rejected the call.

We asked Mehmet Perinçek, United World International expert, on his opinion about the incident of Bucha.

Perinçek made the following statement:

The US and the globalists had lost the initiative as a result of the Afghanistan defeat and the failure in Kazakhstan. Russia’s military operation in Ukraine had indicated already the end of the unipolar world. The West has not succeeded in the disrupting the Russian-Chinese relations after the start of the operation. Quite the opposite, NATO and the Pentagon have with their recent statements confessed that Moscow and Beijing were crushing the Western-guided system down. At the same time, several acts have taken place that punched against the hegemony of the US dollar.  The Gulf countries have no only given up following Washington’s line, they even started to approach Moscow and Beijing. They rejected Washington’s demand of increasing oil production.

The situation has become even more difficult for the globalists with the electoral defeat of the Pro-Atlantic forces in Serbia and Hungary and the failure of the US attempt to topple down Imran Khan in Pakistan.

Taking a closer look at the Ukraine crisis, the Russian-Ukrainian meetings that took place in Istanbul with the mediation of Turkey have pushed the US even further out of the playing field. The meetings have constituted an important step to free Ukraine out of the hands of the US.

Afterwards, it became obvious that the US opposed an agreement between Moscow and Kyiv mediated by Ankara. The whole global public opinion interpreted the tweets of US President Biden, published the day of the meetings, in that way.

Therefore, the Bucha Provocation should be interpreted as a US attempt to regain the lost initiative and sabotage the Ukrainian-Russian peace tasks in Istanbul. Kyiv was getting closer to accept the demands articulated by Moscow, which in turn would have meant a complete disaster for the US Ukraine policy. The Atlantic system would not only have lost Ukraine; the agreement would also have eliminated the ground of all the sanctions imposed against Russia.

In summary, the Bucha Provocation, which indicates involvement of Western intelligence agencies and Western guided forces in Ukraine, aims to:

1. Target the Istanbul process and enable the US to a renewed intervention into the crisis;

2. Pave the way for new sanctions against Russia, increase the military support for Ukraine and provoke the global public opinion against Moscow;

3. Prevent the Russian and Ukrainian people from re-establishing friendly ties.