“Multipolarity is the world’s path ahead” 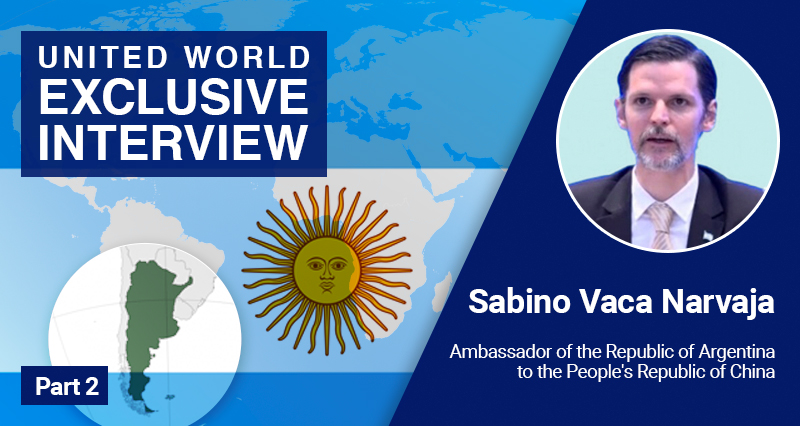 Asked about the recent Chinese-Russian joint statment, “The path ahead must be that of multipolarity, since no country in the world is born to be a satellite of another”, says Sabino Vaca Narcava, Ambassador of the Argentine Republic to the People’s Republic of China in his interview with United World International.

In today’s second and last part of the interview, the ambassador comments on possible repercussions of US sanctions against Russia on Argentine-Chinese relations, on the cooperation potential between CELAC and China and on the comparison of the Malvinas and Taiwan.

In the context of the conflict in Ukraine, the West discusses introducing sanctions against Russia. In the event that these sanctions also affect China for being Russia’s ally in that conflict, what would be the position of the Argentine government?

China has given more than enough signs of its willingness to uphold multilateralism and support the promotion of peaceful conflict resolution. It has already done so on other occasions, facing other conflicts. For this reason, Foreign Minister Wang Yi, on behalf of his country, declared himself in favor of respecting the sovereignty and territorial integrity of all countries and, likewise, seriously abiding by the purposes and principles of the Charter of United Nations.

Later, on the same tune, President Xi Jinping spoke with his Russian counterpart, Vladimir Putin, to open a dialogue channel aimed at peacefully resolving the conflict with Ukraine. Peace is something that has always been deeply rooted in Chinese philosophy and culture. This is an ancient tradition. On the other hand, let us remember that China, despite being a strategic partner of Russia and having ratified that alliance after the recent meeting of the presidents of both countries, has still not yet formally recognized the annexation of Crimea made by Russia in 2014. Sovereignty is a cardinal principle of Chinese foreign policy.

“Sanctions have not produced positive results but aggravated conflicts”

I cannot anticipate what the position of the Argentine government would be in such a hypothetical situation of sanctions. A priori, I believe that the traditional position held by our country in the face of this type of measure should prevail. Ultimately, sanctions have negative effects on the population of a country and its nationals residing in other countries. This is the position that Argentina maintains in the different international forums in relation to the economic, commercial and financial blockade measures in different contexts. Sanctions are not a good mechanism, neither for the peoples nor for resolving conflicts. This has been very clear in similar measures that have not produced any results. On the contrary, they have generally tended to aggravate conflicts. On the other hand, I don’t see why China should be sanctioned internationally since it has had a very clear position in the face of the conflict.

“Multipolarity is the path ahead”

Before arriving in China, the president of Argentina has visited Russia. Afterwards, the presidents of Russia and China have signed a joint declaration on “the new era in international relations”. What is your evaluation of this declaration? Can it be considered as an important step towards global multipolarity? What is its meaning for Latin America?

Although China tries to regain the central place that it had until some point in history, this search or reconquest of the lost position — which Xi Jinping has characterized with the notion of “Chinese dream” — has been through a peaceful ascent. China was stripped of the place it had achieved, to the point that in speeches the country still refers to the century of humiliation that began with the opium wars in the mid-19th century.

However, it has today opted for the path of cooperative multilateralism. An analysis of the common declaration is complex today, when everything changes within hours. However, I believe that China is not going to deviate from the roadmap that has been drawn up, and it will continue to uphold a discourse in defense of multilateralism.

I take up what President Fernández pointed out in the framework of the delivery of the honorary degree at Tsinghua University: the path ahead must be that of multipolarity, since no country in the world is born to be a satellite of another. And while all countries must develop their own path, this travel must be done jointly, one on a par with the other, with the rest of the free nations of the world.

That is, in my humble opinion, the path that China seeks to follow and should embrace in Latin America. China sums it up with a concept of great beauty, Tianxia, which means “everyone under the same sky”. It is the model that must prevail in the relationship between the parties, a non-subordinate relationship based on cooperation and dialogue.

Argentina assumed the pro tempore presidency of CELAC, an organization that has already signed a ‘Joint Action Plan in key areas’ with China last December. What is your expectation for CELAC’s relationship with China during the Argentine presidency?

The signing of the Joint Action Plan agreed upon by China and the CELAC for the years 2022-2024 seeks to strengthen the Forum that already existed between both parties. In this sense, CELAC, as a regional integration mechanism, can be a useful tool to take position facing China and the rest of the world.

I have always maintained that the definition of a national development model of its own cannot ignore the need to promote a continental strategy that allows accentuating the terms, in which negotiations with other international actors are approached. In particular, but not only, with China, Latin America’s relationship has so far been based on the commodity model, which — due to the heterogeneity of the raw materials traded by each country — has not facilitated a true intra-bloc association.

Latin America must join forces to take advantage of the new Chinese global strategy, I am referring to the Belt and Road Initiative, and thus strengthen regional trade through the infrastructure that China offers. This relationship must be established from a continental perspective, through the establishment of appropriate and coordinated policies at the regional level.

The assumption of President Fernández as president pro tempore will serve to revitalize CELAC and thereby strengthen regional unity. It will also improve our ability to negotiate with China and the rest of the countries. As President Xi pointed out, Fernández’s presidency in CELAC will be an important boost to “build together the China-Latin America and the Caribbean community with a shared future.”

Argentina is fighting to restore its sovereignty over the Malvinas, while the People’s Republic of China defends the “One China” policy in consideration of the island of Taiwan. In what way are the two cases similar? What are the potentials for cooperation between Argentina and China in the Malvinas-Taiwan issue?

China and Argentina have been cooperating and giving each other reciprocal support for some time on the matter. In fact, China ratified whenever it could and in different forums its support for the Argentine claim. It voted in favor of all the resolutions of the United Nations General Assembly on the Question of the Malvinas Islands adopted between 1965 and 1988. When the issue came to be dealt with by the Special Committee on Decolonization in 1989 — of which China is a part — it continued keeping up support.

Recently, on the occasion of President Fernández’s visit to Beijing, China reiterated its support for Argentina’s claims to sovereignty. For China, the issue of the Malvinas Islands is essentially a hindrance from the colonial era.

For its part, Argentina supports the principle of one China from the very moment that both countries normalized their diplomatic relations.