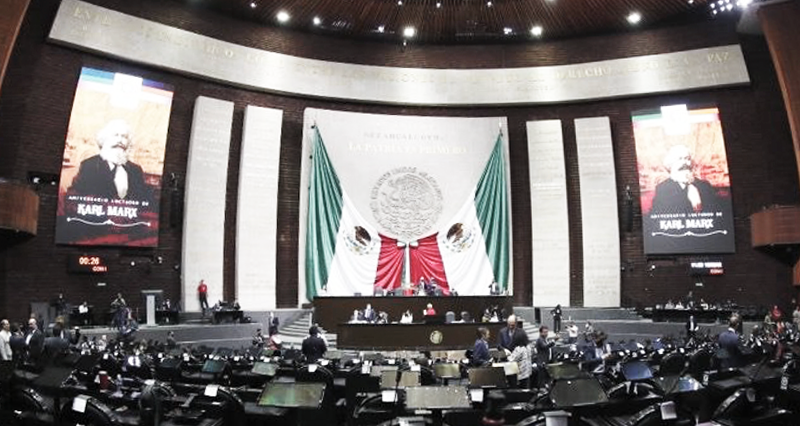 On March 15, the Mexican Chamber of Deputies commemorated the 139th anniversary of the passing away of Karl Marx. The lower chamber of the bicameral parliament of Mexico dedicated a distinct agenda item, with all represented parties’ holding speeches about the German philosopher considered main thinker of communism.

During the speeches, both sides of the of the parliament’s speaker stand were decorated with a picture of Karl Marx and the emblem of the Chamber of Deputies.

Morena: Struggle to achieve that means of production belong to all

On behalf of Morena (Movement of National Regeneration), Mexico’s governing party and with 202 seats in the 500-seat-chamber the strongest fraction, Víctor Gabriel Varela López held a speech.

Emphasizing that today’s struggle is to achieve that all means of production belong to everyone and labor is valued as what it is – a means of creating all riches and not an instrument of capital accumulation – López stated “Morena is conscious that Marx is more alive than ever.”

Referencing Marx, López described how the privileged had plundered workers and peasants and left them without anything else but their labor to be sold, which the deputy called “neither divine choice nor of higher value”. López added that “the Fourth Transformation derives from there exactly, trying to level these inequalities”.

For the Labor Party (PT), that has 33 deputies in the Chamber and is part of the governing coalition spoke the Pedro Vázquez González.

Labor Party: Marx’ ideas are present in the Fourth Transformation

Stating that the ideas of Marx are continuing to circulate around the world, González said “those that exploit the labor, those that benefit from neoliberalism and those that have made the market their god are trying to ignore this anniversary. They are saying that with Marx, his ideas also have died. This is completely wrong.”

González said that “capitalism, the system which Marx analyzed in a brilliant manner, is going through a profound and multi-faceted civilizational crisis, while humanity is progressing towards a society of equality, to which his ideas have laid the foundation.”

“Marxism is a vivid theory capable to adapt to new realities,” said González, adding, “in the struggle where millions of Mexicans are advancing the Fourth Transformation, his ideas of justice and equality are present”.

MC: the demand for just distribution is still valid

For the oppositional left-oriented Citizens’ Movement (MC – 33 seats in the chamber) spoke the Deputy Gerardo Gaudiano Rovirosa, emphasizing that Marx was one of the founders of the modern science, whose advocacy for a more just distribution of wealth is still valid.

Rovirosa said “beyond ideologies, all us of desire a more just, wealthy and equal country” and added that freedom of press is one of the pillars of that path.

PRI: Marxism is in our roots – today we need a balance between all social sectors

Another speaker was Victoria Eugenia Méndez Márquez on behalf of the Institutional Revolutionary Party (PRI), the party that emerged out of the Mexican Revolution of 1910 and has governed Mexico during almost all of the 20th century. Today the centric PRI has 71 representatives in the chamber and is in the opposition.

Méndez Márquez said “We must reflect on the contributions and questions left by the philosophical and social thought of Karl Marx in the political history of our country”.

She elaborated that this ideological current is not foreign to her parliamentary group, “since the origin of our party stems from the social movements of the Mexican Revolution, which was precisely a social class struggle of the worker and peasant sector.” She considered that there must be a balance, “an even scale where all social sectors have legitimate rights and aspirations as a result of effort and dedication, an aspect that Marx himself recognized.”

PAN: The moment now demands putting ideas at service of the country and not pursuing ideologies that only generated social division

For the right-wing Party of National Action (PAN – 113 seats) spoke the Deputy Javier González Zepeda, saying his party “does not share the Marxist ideas, but much less the misinterpretations of them that different governments have made and that have made them fail. We reject those doctrines that conceive the State as an instrument of domination and control of society”.

He considered that the current moment demands “putting our ideas at the service of the country to improve its situation and not putting the country at the service of ideologies that have only generated social division and the cover-up of the most dangerous dictators.” González stated “we believe in and promote human freedoms, freedom of expression, of the press, of association as supporters of liberal democracy with a humane sense and a vision of solidarity.”

The commemoration occurred on demand of the governing left-wing coalition. The coalition is trying to advance the so-called Fourth Transformation, which is considered the next fundamental change after Mexico’s liberation from the Spanish empire, the foundation of the Republic under Benito Juarez and the Mexican Revolution of 1910 that advanced social and economical demands.

The coalition currently fights to realize its energy reform with a strengthening of national sovereignty over energy production and distribution. Another hotly debated topic is a referendum about his presidency that President López Obrador himself has proposed nearing his half term. López Obrador wants to establish a mid-term referendum constitutionally, providing the electorate the chance to end presidency after 3 years.