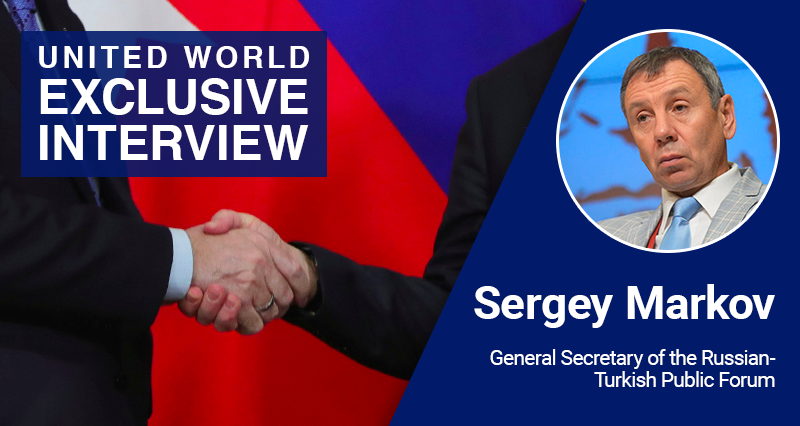 Sergey Markov, General Secretary of the Russian – Turkish Public Forum, Director of the Political Studies in Moscow State Institute of International Relations (MGIMO-University), a former member of the State Duma and a former Press Secretary for Putin, has told Turkish newspaper Aydınlık that the current situation may be an important opportunity for the Turkish Republic of Northern Cyprus (TRNC).

The fact that Turkey has not joined the economic sanctions against Russia has created opportunities for both Turkey and Russia. Russia is an important trade partner for Turkey and has an important weight in some sectors such as tourism. Over 5 million Russian tourists come to Turkey annually. Markov has told Aydınlık that Turkish and Turkish Cypriot officials should take some quick actions on the tourism sector between Russia and these two countries. Markov, who considered Turkey’s restraint from the sanctions as a very positive move, also noted that relations will certainly improve in many other areas.

“Turkey has withstood the pressures from the United States”

“Turkish banks may fill the gap left behind by European banks”

Stressing specifically the blockings and sanctions imposed against the banking sector, Markov said that Turkish banks could be established in place of those that put up sanctions on Russia. He said, “Turkey’s restraint from the sanctions against Russia will surely have some positive economic outcomes. Many Western companies have left Russia. Turkish companies can take their place. And the West has also sanctioned many Russian banks. Turkish banks can open credit card accounts for millions of tourists in Russia. This is a great economic opportunity. And that is because the United States or Europe cannot block Turkish banks right now.”

Saying that the belligerents of the Ukrainian crisis were not Russia and Ukraine, but actually the United States and Russia, Markov added, “Turkey is trying to mediate between Russia and Ukraine. But it is not Ukraine that is against Russia. It is actually the US. We are now in fight against the United States, which has occupied Ukraine via various coup d’états. CIA plotted a coup in Ukraine. They overthrew the democratically elected President Yanukovych. Then they formed an illegitimate pro-American government in the country. Turkey can still play a peacekeeping role after the Russian operations against neo-Nazism.”

Also noting that Russia has always had a friendly approach towards Azerbaijan, Makrov said, “The Azerbaijani President Alivey visited Moscow after the Russian announcement to recognize diplomatically the Donetsk and Lugansk People’s Republics. On that visit of Aliyev, an alliance agreement was signed which will play an important role in the bilateral relations.”

Stating that Turkey and NATO had been having a lot of problems, Markov also stressed the NATO role in the failed coup attempt on July 15th 2016. Markov said “NATO and their allies supported the failed coup attempt on July 15th 2016 against Turkish President Recep Tayyip Erdogan and the Turkish state itself. NATO and their allies also supported the Kurdish militias (PKK/PYD) in Syria, which Turkey fiercely opposed”.

Markov said, “A large number of Russian tourists can go alternatively to the TRNC right now”, adding that this would improve the TRNC economy incredibly. He added that related steps in tourism should be taken immediately, stating “We are now entering spring season, and officials from the Turkish Ministry of Culture and Tourism and the TRNC officials should immediately prepare to invite the Russian tourists. Some charter flights and additional routes should be arranged”.