The leader who covers up Nazis in Ukraine and defends NATO 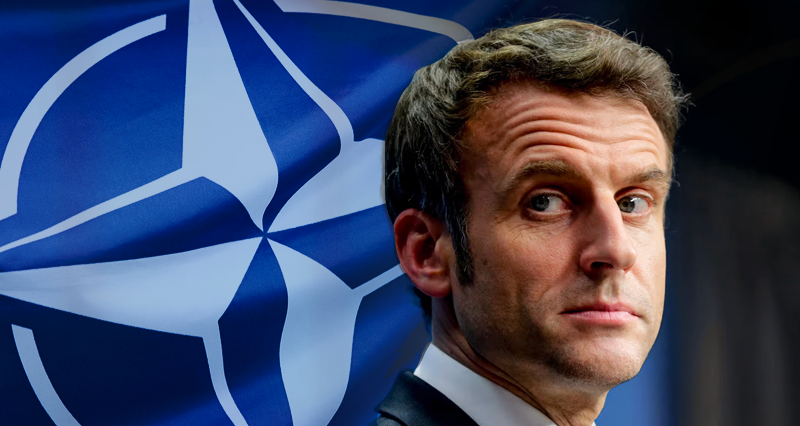 The French President Emmanuel Macron gave a long address to the nation. He spoke about the Russian military operation that aimed to stop the NATO expansion eastward and to ensure the Russian national security against Ukraine. And one day later, Macron announced his official presidential candidacy – an announcement he had delayed over many days.

Just as his predecessor Nicolas Sarkozy, Francois Hollande had been acting as an American envoy in Europe and as a man of the Atlantic front when he took over the government. They had both been alarmed by the sirens of war over the European continent after the fascist coup in Ukraine, back in 2014. And the crisis grew even larger when the Crimean people decided to join Russia.

Europeans did not want war on their lands. The United States on the other hand, was constantly provoking a war against Russia with the membership of the Eastern European countries to NATO and actively pursuing a policy of containing Russia by expanding NATO eastwards. Ukraine was a key country to reach the Russian doorstep. Being unable to develop its own policies, Europe has complied to the US sanctions in the past, and once more today.

The US backed colored revolution provocations in the mid-2000s, funded pro-Western NGOs in Ukraine and incubated and armed Nazi groups, fueling massacres during the Maidan protests. No matter how hard the Atlantic media tries to cover up this horde of murderers, the American director Oliver Stone’s 2016 documentary “Ukraine on Fire: The Real Story”, reveals all the truth before our eyes.

Macron is sticking with the American lies

In his speech, Macron says “Neither France, nor Europe, Ukraine or the Atlantic Alliance ever wanted such a war. On the contrary, we tried everything we could to prevent it”. He is covering up the US aggression, by stating that he and some other European leaders and even the US president had personally met with Putin to seek an alternative solution to this military conflict. But Putin has chosen war instead, declares Macron.

The French President tried to sugarcoat NATO by saying “This war, as some articles have written, is not a conflict between NATO/the West on the one hand, and Russia on the other. There are no NATO forces or bases in Ukraine. This is all a huge lie. Russia was never attacked. Russia is the aggressor itself”. He went further stating that “The propaganda of the struggle against Nazism is also a huge lie”. He claimed to make it clear that the rhetoric regarding “the European strategic autonomy or a European Army” would not be hindered by the existence NATO.

We are living in a historical time period of a new world is being established. And the recent developments have also shown that NATO and its commander, the United States, are in a process of disintegration. Europe is now at a turning point. It will either share the same fate as the collapsing United States, or take part in the establishment of the new world. Unfortunately, there is not a single leader in Europe being able to see this. But this process will reveal some new dynamics in European politics.

The Pro-NATO leader that supports sanctions

Macron said France have been “providing supplies and equipment to support the Ukrainian people with humanitarian convoys and to defend themselves”. He thus admitted essentially that his country had joined the United States, UK and other European countries in imposing sanctions against Russia and its leaders.

Admitting that France “has joined NATO-led efforts to protect the security and sovereignty of our European allies by strengthening our existing military presence in the Baltic countries and the surrounding region,” Macron announced the deployment of several hundred French troops to Romania. He has left an open door by saying “But despite all this, we are still not at war with Russia. We know everything that binds us to this great European nation, the Russian nation who sacrificed so much to save Europe from complete devastation during the World War II”. He added “I will keep in touch with Putin as much as I can and whenever necessary”.

Macron stated that the war has destabilized Europe and added, “our beloved Europe will be hit hard”, pointing out that hundreds of thousands of refugees will flee from Ukraine, a matter where France will take its own responsibilities.

Saying “Our economy will be affected,” Macron gave some of the outcomes of sanctions over Russia “Our agriculture, our industry, and many economic sectors will suffer greatly either because they depend on imports of raw materials from Russia or Ukraine, or because they export to these two countries. Our national growth is at its highest level today, but it will inevitably be affected. The increase in the prices of oil, gas and raw materials will surely have consequences on our purchase power: in the price of the fuel that we put in our cars, the prices we pay in heating bills and the costs of some products will increase”. But according to Macron, it is Russia and its leader Putin who are to blame for all that.

The European continent has suffered two great wars over its lands. These wars, in which tens of millions had lost their lives and where a great destruction occurred, still have a frightening effect on the people. Macron is already 8-10 percent ahead of his opponents in opinion polls released during the week he announced his candidacy.

In his speech, he cited Russia and Putin, who “gave the order for this war”. He has found his scapegoat throughout the election campaign. He is hoping the people will vote for him, after saying that Putin is responsible for every difficulty in their economies, and that he will fight with a great determination against it and minimize the damage that the French people will suffer.

Macron is still trying to defeat his opponents, who have came up with anti-NATO rhetoric, by simply turning back to the NATO front.