“The African people are turning their back on French puppets” 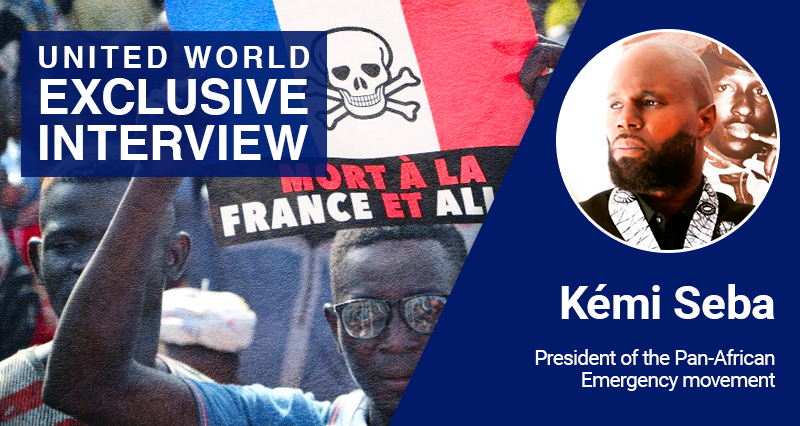 As the anti-French movement rises again in Africa, France, shaken by coups in its former colonies, is seeking ways to maintain their hold on the region. On the other hand, while the Pan Africanist movement is getting stronger all over the world, non-Western actors such as Turkey, Russia and China are also strengthening their relations in the region.

We talked about the developments in Africa, the role of France and the situation of the Pan Africanist movement on the World with one of the well-known leaders of the Pan Africanist movement, French-Beninese activist Kémi Seba. The 40-year-old Strasbourg-born activist, who heads the NGO ‘Pan-African Emergency’, is known for his demonstrations and campaigns against the neo-colonialist ‘Françafrique’ project and the CFA franc. He is working to mobilize the people of West Africa against French neo-colonialism.

The greatest enemy is French neocolonialism

Mr. Seba, you are known as a figurehead of modern Pan-Africanism. You spearheaded a movement against the CFA franc. Could you tell us about your activities to support Africa around the world?

I am the head of an NGO, Pan-African Emergency (Urgences Panafricanistes) which operates throughout French-speaking Africa within the diaspora. This organization fights against neocolonialism for social justice. In the social domain, we carry out a wide range of activities aimed at serving the most precarious families and providing micro-credit, creating small businesses that will allow them to feed their children.

On the other hand, we carry out mobilization and awareness campaigns with the African population and the diaspora in the field of anti-colonial justice, helping the people become fully aware of the dangers of neocolonialism. Our greatest enemy is French neocolonialism. We are also very vigilant against American neocolonialism and Western neocolonialism in general, and we are also wary that great powers such as China, who are working with African countries today, respect our sovereignty. Our movement is sovereigntist, anti-imperialist and pan-Africanist.

How are the independence movements in Africa perceived by the population of African descent in France? Are they supported?

Independence movements like ours in any case are very well perceived by the African populations because we are waging a fight that touches their hearts. We speak in a language that they understand and the language that touches their people. We fought very hard on the ground of agreement in the streets. We stand by the population with social solidarity and, on the other hand, we appear a lot in the African media and especially in social media networks. It is this three-level campaign that allows us to convey the message at a high intensity.

Is there a difference between left and right parties in France in their vision of Africa?

For us, France is a country of hypocrisy on many points, and the left and the right, even if officially they do not have the same political line vis-à-vis Africa, when they are in power, they always have the same attitude. This is either a paternalistic attitude or open neocolonialism. In both cases, they always seek to steal raw materials from Africa.

I saw a poster from your meeting in Paris. How should the Afro-diaspora in the world organize itself politically and economically to support Africa?

We are doing work to assure that the diaspora becomes a bed of support for the African populations on the ground who are leading the fight. Those who cannot return can at least contribute financially to set up structures to contribute to help the liberation movement that is being organized on the African continent. Here, we are acting within the boundaries of the political arena. Our communities act as lobbies offering direction and asserting influence in order to contribute, in French, to elections.

The role of France in Africa

What is the role of France in Africa? What is the situation of the Françafrique system today?

It would take too long to explain, but what is certain is that France’s Africa today is nothing good. It’s a neo-colonial system based on the plundering of mineral resources, the plundering of raw materials, the plundering of economic resources and, frankly, the political corruption of our elites. Without this new form of colonialism, which we call Françafrique, France would not have achieved its present power in the world, so it has to continue this business of oppression and plunder.

What are the reasons for the recent coups in the countries traditionally under French influence – Mali, Guinea, Chad, a failed coup attempt in Niger and the latest in Burkina Faso?

ECOWAS is the reflection of Western interests

How do you evaluate the ECOWAS sanctions against Mali?

We were told that ECOWAS is today the reflection of the European Union’ and Western interests, unfortunately. It is an institution that betrays its initial objectives. These are the sanctions of the sentimental apparatus against African interests.

We accept the win-win partnership

Turkey, China and Russia, to different degrees,  all have an impact of necessary interest to counterbalance Western influence. On the other hand, there are also some nuances. We are in a sovereigntist movement and we do not want the domination of other peoples. We want respect for our sovereignty, our independence and our integrity. We feel when a country respects our sovereignty and wants to be in a win-win partnership, we are takers. The problem is that when these countries come to ours, they meet such corrupt leaders that when they give them a little for their pocket, they tend to sell off the resources of our countries. That is why the civil society, where we are some of the most influential forces today, must assume its responsibilities to demand that foreign nations respect the right to dignity and the sovereignty of the state.

You recently visited Turkey. How do you see the relations between Turkey and Africa?

I visited Turkey and I think there are still many things to do. I think Turkey needs to work with African civil society beyond its leaders. Turkey is a rising country. I used to believe they were close with the Western oligarchy, but in recent years, we have seen President Erdogan understand the West’s attempts to destabilize his country. He understood the importance of smiling south and strengthening ties. They have seen that Africa has unlimited potential in terms of creativity and strength precisely because of solidarity. We really believe that there can be an interesting partnership between Turkey and Africa if Turkey, as I said, respects sovereignty and continues its line of contestation of Western hegemony.

Can Africa as a continent, or certain regional blocks within it, or individual countries, become not an object, but an independent pole in a multipolar world?

Populations all over the continent, not everywhere but a good number of places, are seeing the creation of a feeling of African unity and Pan-Africanism. There is a sense of new cases being made in the same way; there is Eurasianism, there is Pan-Africanism and there is Bolivarism in South America. Pan-Africanism is a project of freedom of self-determination, which understands more than ever that such goals could not be attained without the masses.