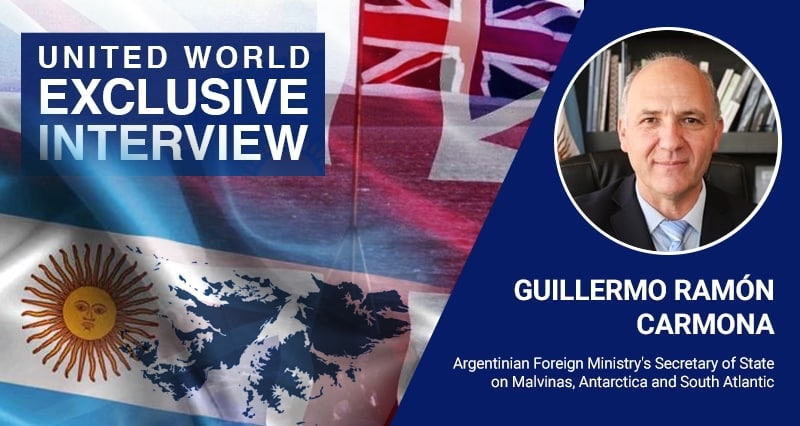 In the context of the 40th anniversary of the Battle for the recovery of Malvinas (for the United Kingdom, Falkland Islands), we interviewed Guillermo Carmona, Secretary of State on Malvinas, Antarctica and South Atlantic. Carmona is also the representative of the Argentine Ministry of Foreign Affairs before the National Commission on the Outer Limit of the Continental Shelf.

At a time when Great Britain is trying to spearhead a new colonialist incursion in Ukraine, a review of its colonial policy in Malvinas provides elements to understand the nature of its foreign policy and its warmongering.

UWI/PIA – What is the current status of the Malvinas negotiations?

The status of the negotiations has been the same for more than 40 years. The United Kingdom refuses to restart the negotiations that existed before 1981; between 1965 and 1981 there were different kinds of dialogues and negotiations on the Malvinas question aimed at resolving the sovereignty dispute.

In other words, the United Kingdom violates the resolutions of the United Nations that establish that in the case of a sovereignty dispute, states that are party to the dispute, the United Kingdom and Argentina, cannot take unilateral actions. One of the most serious breaches has to do with the militarization of the archipelago – a process that the United Kingdom has sustained in a constant manner, increasing especially in the recent years.

Argentina therefore questions and repudiates every incident that implies a step forward in the process of militarizing the islands, as it happened recently with the installation of the Sky Saber missile system to replace the Rafael system.

I take this opportunity to tell you that there is another serious context forty years after the war. Files that have been declassified by the United Kingdom show that back during Malvinas War, London decided to deploy nuclear weapons to the islands. In 2003, their presence had become known publicly. What current declassifications reveal is the magnitude of the armament, which is absolutely serious and scandalous. There are 31 depth bombs with nuclear charge equivalent, whose destructive power equals 15 or more as that of the Hiroshima bomb.

Argentina today continues the preoccupation concerning these nuclear weapons, and I repeat, their deployment was confirmed in 2003. We ask what happened to these weapons and bombs, whether some of them are still on the Malvinas and whether the sinking of certain ships is connected to their existence. In fact, one of the ships that has been confirmed to be carrying nuclear weapons, the Invincible, was under fire from the Argentine Air Force, and although it was not sunk, it is a ship that was severely damaged. Argentina continues to denounce the deployment of these weapons internationally.

So, we are working on that, we are continuing demanding explanations from the United Kingdom and we inevitably connect these historical facts with what is happening today: the United Kingdom continues to militarize part of the Argentine territory.

UWI/PIA – There is an unavoidable issue that cannot be ignored: the situation that Great Britain is having within NATO and its participation in the Crimea conflict. Can this be seen as the continuity of Britain’s colonial policy after having left the European Union? And since the Falklands have lost their status as European territory, does the situation, which is taking on global aspects, express a neo-colonial policy in war issues?

Look, I am careful not to draw parallels between conflictive situations occurring in different parts of the world. I try not to transpose the Malvinas situation to the tension that exists at this moment so directly. I am not saying that it cannot be done, but I try to be prudent in terms of focusing on what concerns us in relation to the United Kingdom.

I would put it in another way: after the BREXIT, the United Kingdom with its conservative governments has launched what called “Global Britain”. This is a new project of repositioning the United Kingdom on the international level. Among other instruments, it is connected with the review of their defense and security policy with the explicit pretension of playing a global role. In other words, this concept expresses in some ways an imperialist leftover from other times and from another world. In relation to the Malvinas, in relation to its position with respect to the South Atlantic and Antarctica, we visualize that the United Kingdom is trying to revive those imperialist policies that were associated with a situation of world primacy. But today’s circumstances show that the United Kingdom is very far from being able to play that kind of role anymore.

In any case, of all the instruments they are developing, the “Global Britain”, what is called the Integrated Review of the international defense and security policy and other instruments, there is this pretension to play a role in which the maintenance of colonialism, in what they consider overseas territories, is one of the key elements.

Against this, we emphasize that the United Nations have declared the South Atlantic a zone of peace, free of nuclear weapons, and we denounce that the United Kingdom systematically violates those resolutions of the United Nations. Similarly, we declare that both South American and African countries of the South Atlantic have agreed that this should be a zone of peace and cooperation. The United Kingdom has a disruptive position with its colonial possession in Malvinas and is going in a completely different direction from what the countries of the region are expressing.

UWI/PIA – Facing this situation militarist advance of Great Britain and its NATO allies, is it possible to consider an anti-colonialist alliance that includes powers such as China and Russia, being able to stop all this? Taking into consideration the new great alliances that are being established, for instance the call of the Shanghai Cooperation Organization towards the CELAC, is it possible to think of having a reinforcement that allows us to claim sovereignty or to carry out these discussions with their support?

We are in a process of global reconfiguration and this process has to do with the trend towards a multipolar world. This also implies a new geopolitical configuration. Argentina does not have an automatic alignment. The current Argentine government is not allied automatically – neither with Western powers nor with Eastern powers.

What Argentina does is to maintain constructive links with the idea that we can act from a third position. Our government maintains in foreign policy the Peronist doctrine of a third or neutral side, and being that third side allows us to propose cooperation actions with countries of different nations of the world, with regional blocs of different nature. This leads us to have interaction with China, with Russia and at the same time to maintain a cooperation scheme with Latin American countries and even with countries of the Americas within the framework of the OAS.

We greatly appreciate the support of China and Russia to Argentina concerning the recognition of Argentine sovereignty over the Malvinas and we also appreciate that all the countries of America, including the United States and Canada, at the last OAS Assembly have expressed a call to the United Kingdom to sit down at the negotiating table. In this regard, I do believe that Argentina has an open agenda of cooperation at all levels with all countries. Besides, we also have a long diplomatic tradition, long established diplomatic relations, with the United States and with also China and Russia. This is a general policy besides of our relations to the rest of the Latin American countries.

Today, beyond the ideological signatures of their governments, Latin American countries increasingly establish international relations without entering the game of a new cold war that some international actors promote.

UWI/PIA – I would like to ask you one last question about the Madrid Treaties; does the current situation with Great Britain call for a review of the preeminence that exists in trade relations with that country?

I have another approach to the issue. The truth is that the Madrid Treaties are being made to say things, which they do not say. In fact, one of these issues, the connection to hydrocarbons, was left without effect by the government of Néstor Kirchner.

There are economic and commercial links resulting from the dynamics of the economy itself. We believe these provide a positive context for the relationship, but the maintenance of the sovereignty claim and the call to the United Kingdom to negotiations are not subordinated to them. Therefore we are in a permanent process of reviewing the way of relating with the United Kingdom in order to achieve the objective set by the National Constitution, which is the recovery of the exercise of sovereignty over Malvinas and the South Georgia and South Sandwich Islands as well as the corresponding maritime spaces within the framework of International Law. This is what we do, and it is not possible to solve a sovereignty dispute if there is no diplomatic relationship and for a solution, there must be a link between the states involved in the dispute.

China, above all, is a very good example of how the sovereignty claim, in the case of China over Hong Kong or now over Taiwan, does not imply to have no relationship at all, but turning the existing relationship into an instrument to achieve the main objective, which is the recovery of territorial integrity.