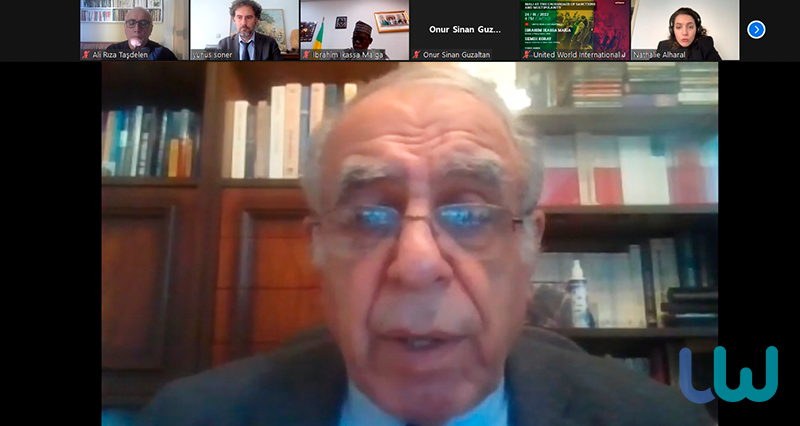 Below we document the speech of Koray. Subheadings were set by UWI.

I would like to start my talk by respectfully saluting our distinguished guest in this event, Mr. Ibrahim Ikassa Maiga, Minister of Refoundation of Mali, on behalf of Vatan Party and Dr. Doğu Perinçek, the Chairman of Vatan Party.

The origin of the problems that Mali faces today is, as in many other neighboring African countries, the neocolonialism of France backed by the Atlantic System, which, in addition to economic, political and military threats and pressures, also makes use of separatist and extremist terror organizations to destabilize the country. Armed threats can be overcome by armed forces; imperialist pressures and threats can be defeated by mobilizing the people. August 18, 2020, marks the date of establishing the unity between the nation and the army in Mali. Thus, the take-over of power by the army-nation union in Mali at that date is nothing but the implementation of the unique solution that will put an end to the crisis in Mali, let alone being the source of the crisis as the French colonialists and their followers try to claim.

France has been attempting to change the Malian Government by demanding the transfer of power to a civilian government since then. When we translate this demand to plain language, it is nothing but demanding the opening of channels for imperialist influence, manipulation and pressure. Mali responded to that demand by closing those channels more tightly on May 24, 2021. The consequence of this revolutionary countermove was that France had to agree to withdraw the French Barkhane Force from Mali in June 2021.

Mali did not bow down to French colonialism

France has been insisting recently to impose that elections be held in Mali in February 2022. It is paradoxical that a country, which saw no harm in governing the whole region as a colony by sheer force for more than a century, is now being so “sensitive” about the election dates. The Republic of Mali, who gained its independence and sovereignty not thanks to France, but by fighting against France, did not bow down to that imposition either and declared that the elections will be held in five years after the provision of security all over the country and the completion of the refoundation process. After France having been regretfully able to use ECOWAS for the imposition of sanctions, those sanctions were condemned by the Republic of Mali as illegal, illegitimate and inhumane.

We, as Vatan Party, completely agree with the response of Mali against the sanctions that resemble more a wartime blockade than a field-specific set of sanctions and condemn them strongly. We also wish to note that the level of hostility reflected by those sanctions indicates how great the fear of French colonialism is in face of the rise of the national democratic movement in Mali. This fear is maybe the only aspect of French neocolonialism that complies with reality.

Today sanctions are being used widely by the imperialist system as hegemonic tools to interfere into internal affairs of developing countries. Sanctions have been imposed on around 42 countries including Russia, China, Iran and Turkey, by the US in order to help create dissent among the people to push for regime change, i.e., a change from a regime fighting against the imperialist domination to a regime that surrenders to the imperialist system. The sanctions directly target the peoples themselves as they aim to induce set consequences by destroying the peoples’ welfares. France, as the main representative of the Atlantic System in Northern Africa and the Sahel Region tries to do the same thing. There is no space for such sanctions in a fair international order based on equality.

We wish to work more closely with Mali

However, it is perhaps more important to note that our world is going through an era, during which sanctions have so far been nowhere successful. We are sure that the sanctions against Mali will share the same fate. The main consequence of them among the people in the ECOWAS countries will be the rise of a further fury wave against France and against the country administrations who obeyed France’s directives. But in order to reach that target with a minimal harm to Mali, we wish to work more closely to find ways and channels between Turkey and Mali and more generally on the international plane, through which Mali can benefit from international cooperation to strengthen its own force.

The world today is different than the world in the 20th century. From the viewpoint of the imperialist system, Afrika is still nothing but a rich source of precious raw materials and energy. If the West cannot continue plundering Afrika’s material richness, then it will become impossible for the countries of the Atlantic System to sustain their own present welfare. That will also create dissent among their own people, which they will not be able to cope up with. Thus, the African people are in the eyes of the imperialist system not part of mankind, but they are just “factors” that have to be dealt with as potential hindrances against the domination of the imperialist system. There is nothing new in what I said here for our African sisters and brothers. It is just a replication of what they have been living in their own experience for some centuries.

The world has changed – the Age of Rising Asia has begun

So, what has then changed in the world? The main change is that the Oppressed World of the 20th century has borne from within itself a Developing World, which is building up a new system that forms an alternative to the imperialist system in every field of life. In short, the 21st century will be the Age of Rising Asia, rather than an American or a Western Century.

For us, for the new civilization rising from Asia, for all those on earth, who are striving to shape a common future for the entire humanity, Africa is a continent, on which 1 billion 250 million people live. It is the homeland of the human species. The negligence of Africa is equivalent to giving up the goal of building up a common future of mankind. Without struggling for the enhancement of welfare of the African countries, the worldwide struggle against the imperialist hegemony will stay one-legged. The crossroads at which humanity turns out to be today are such that one needs to mobilize the entire world against the imperialist system in order to gain a permanent victory by forcing it to retreat back to its homeland.

Our world is going through the Era of National Democratic Revolutions and Opening up to Socialism. Thus, the main actors on the stage are the independent nation-states. It is the individual nation-states, who will decide on their strategies of political, economic, social and cultural development. On the other hand, as they face common obstacles and threats in doing so, international cooperation has become more valuable than ever. We should jointly strive to create a new and fair international order that allows each country to benefit from international cooperation along its own strategy of development.

Mali and Turkey are on the same side in this struggle

We, as Vatan Party defend the five principles of peaceful coexistence, which are mutual respect for sovereignty and territorial integrity, mutual non-aggression, non-interference in each other’s internal affairs, equality and mutual benefit, and peaceful coexistence.

Mali and Turkey are on the same side in this struggle. They are confronted with similar threats originating from a common imperialist source. Both countries’ security is threatened via separatist and extremist terror organizations, both countries are imposed upon sanctions aiming to weaken the domestic front, both countries are subject to economic, political and ideological pressures and threats. Moreover, as one of the main axes along which Turkey is threatened is located in the Eastern Mediterranean including France among the threatening forces, there is some more specific geographic overlapping in terms of common threats. We thus consider every success of Mali as our own success, and believe that every action of Turkey limiting the imperialist system will also serve Mali’s cause.

As Vatan Party, we are ready to do everything that falls upon us to strengthen the relations between our countries both qualitatively and quantitatively. Thus, we are eager to learn from Minister Ibrahim Ikassa Maiga how Turkey can be helpful to strengthen Mali’s cause both urgently and in the strategic long run in the political, military, economic, technical and social spheres.