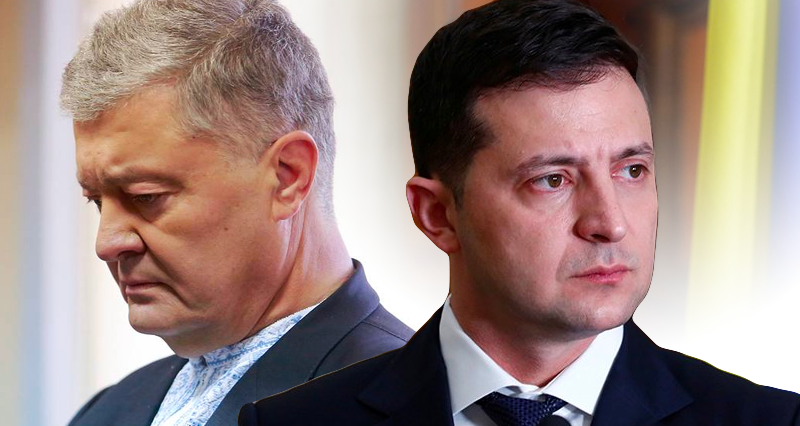 The fifth President of Ukraine (2014-2019) Petro Poroshenko is being charged with treason and the transfer of money to terrorist groups. The former President is accused of importing coal from the territories, which are under control of the pro-Russian seperatist groups (the occupied part of the Donbas region of Ukraine, where there are large cool reserves and mines). However, many are saying that this is more of a political case than a judicial one.

The case was opened by the Chief Prosecution office of Ukraine in December of last year and the first hearing was scheduled for January 17 despite that Poroshenko was abroad at the time, promising to return to Ukraine to attend the session. He kept his promise (as political observers note, if he did not return from abroad, he would have been seen as having jumped ship, which would be a serious blow to his prestige). At Kyiv’s Zhuliany Airport during passport control, border guard units confiscated his passport and was only given it back after his supporters demanded it; Poroshenko managed to get his passport within 15 minutes. After that, he arrived at the Pechersk District Court of Kyiv for the trial. It was expected that the court would declare preventive measures against Poroshenko leaving during the first session, including house arrest. While the court convened in the morning, it made no preventive measures until late evening (the judge himself disappearing for some four hours). This led to rumors that the judge was in contact with the government on further steps to be taken. Later that night it was announced that a decision would be made on January 19. Poroshenko then made a speech to his supporters who gathered in front of the court building and who clashed with police during the day, he was able to return to his home without any form of constraint. The preventive measures, which were declared two days later, on 19 January (the same day that US State Secretary Anthony Blinken arrived in Kyiv), resembled a compromise: instead of house arrest, Poroshenko’s passport was confiscated and he will not be able to leave Kyiv without the consent of the authorities. Moreover, his family’s assets were confiscated. Many observers claim that this was a compromise solution given the former president’s close relations with the US.

Poroshenko claims that the accusations are based on the fact that he is the main rival of current president Volodymyr Zelensky who is attempting to silence his opponents.

Petro Poroshenko is an example of the close relations between oligarchy and politics in Ukraine. He is the owner of the famous chocolate brand “Roshen” and has business interests in numerous sectors. He also owned several TV channels (which he was forced to hand over to new owners in compliance with anti-oligarch laws), one of them having operated as the main pro-opposition TV channel during the “Orange Revolution” of 2004, the channel playing a crucial role in the victory of the pro-Western forces.

Poroshenko could hardly be considered an ideal politician in the eyes of the Ukrainian public: he was a part of the political scene in 1998 as a deputy of the Social Democratic Party of Ukraine (United), which supported then President Leonid Kuchma, and in 2000, he was one of the founders of the Party of Regions (the party of the oligarchs of the Donbas region, a mostly pro-Russian political party, which also supported then president Kuchma). Nonetheless, in 2001, he changed his mind and joined the pro-Western “Our Ukraine” opposition party of Viktor Yuschenko and played a crucial role in his victory in 2004. The next year, he broke off with President Yuschenko and when Yanukovuch became president in 2010, he became his minister of economic development. However, he then broke off relations with Yanukovych and he became one of the initiators of the events of Euromaidan, which led to toppling of the then President Yanukovuch by pro-Western forces at the end of 2013 and the beginning of 2014. After the revolution, he became a candidate in the early presidential elections in the first round.  At first, he advocated a policy of social compromise, but beginning in 2018, he began to side with the Ukrainian nationalists.  For a long time, he was a member of the community of the Ukrainian Orthodox Church of Moscow Patriarchate, but then, he initiated the project of creation of an “autocephalous (independent) Ukrainian Church” under the auspices of the Fener (Istanbul) Patriarchate, a serious blow to the Moscow Patriarchate.

In the elections of 2014, Poroshenko won in the first round (a feat quite unusual in Ukrainian politics). There were two main reasons he was able to pull this off: firstly, the country was in a state of war with Russia and it was urgent to have a legitimate president. For this reason, a great part of the patriotic electorate chose to  vote for the candidate, which seemed to have more votes (without paying much attention to personal characteristics or political ideas) in order to elect a legitimate president as soon as possible. Secondly, Poroshenko’s wealth afforded him a great deal of political space. Some of the voters with whom I spoke at that time told me that they would vote for Poroshenko, because, “almost all the leaders of the country had robbed the country, but Poroshenko, being a businessman, must have enough money, so it was quite probable that he would think of the country”.  Before the elections, Poroshenko promised to sell his business, however, after the elections, he retained them. He was accused by many nationalists of enriching himself during his presidency while people died in the conflict in Donbas region. As a result, he began to be targeted by harsh protests from nationalists. However, in 2018, he was rapidly losing popular support and had to choose between the pro Russian electorate of the eastern and southern regions of Ukraine or the nationalist electorate of central and western regions, of which he chose the latter. Nonetheless, this alliance sparked a strong reaction in the southern and eastern regions where people were opposed to Poroshenko’s nationalist measures, including the imposition of the Ukrainian language. At the same time, many nationalists in the western regions did not perceive him as sincere in his nationalism. Consequently, he lost the presidential elections in 2019. His popularity fell so far that people were ready to vote for whoever ran against him. This was the main reason Zelensky was able to pull in 73% of the vote in the second round of the elections.

The uniqueness of Zelensky’s victory against Poroshenko was his having managed to gain the support of both the pro-Russian southern and eastern regions and the nationalist, pro-Western central and western regions of Ukraine. This was both an indication of his success, but also his weakness, as it was clear that, when he tried to satisfy the expectations of one of those regions, the other would react. Indeed, after Zelensky came to power, he met with the fury of both eastern and western regions of Ukraine: On the one hand, the pro-Russian “Opposition Platform” Party and the media organs of the pro-Russian oligarch and politician Dmytry Medvedchuk attacked Zelensky, accusing him of betraying the pro-Russian electorate; on the other hand, the nationalist parties, including former president Petro Poroshenko and his media organs attacked Zelensky, accusing him of either being incompetent or pro-Russian.    As a result, Zelensky’s rating began to fall.

Ukraine’s political landscape is extremely slippery: aside from the second president of Ukraine, Leonid Kuchma,  no other leaders have been able to make it to a second term. Moreover, a person who falls from power in Ukraine is unable to make it for a long time as an opposition candidate. On this issue, Poroshenko is the exception: although he was defeated in the presidential elections in 2019, he managed to remain the country’s main opposition leader (more implicitly, the main leader of the nationalist electorate). Today, although he has a negative image in the country, he is able to convene large protests against the president.

It should be noted that Zelensky, from the very beginning, adopted a more moderate pro-Western policy in comparison to Poroshenko. For example, he used to advocate for European integration, but he did not emphasize the NATO membership issue. He also used to seek peace with Russian President Vladimir Putin. However, after the first year of his term passed, from the middle of the 2020, he began to ally himself with pro-Western circles, asking why Ukraine shouldn’t be allowed to join NATO, adopting nationalist rhetoric.

Zelensky, as a part of his struggle against those aforementioned centers of power in Ukraine, adopted a law last year aimed at cutting ties between oligarchs and politics. The law states that people identified as oligarchs will not be allowed to participate in politics or fund political parties. At first look, it might seem like this would be a popular policy in the interest of large masses. However, the right to determine who is an oligarch and who is not belongs to the National Security and Defense Council, the general secretary of which is assigned by the president. In other words, the president will determine who can deal with politics and who can not. For this reason, many observers say that this law will be a tool for the president to establish his own authoritarian system.

Last year, the pro-Russian oligarch and politician Viktor Medvedchuk (who used to be owner of many TV channels) was charged with treason and sentenced to house arrest, while his TV channels were all closed. This movement was supported by the US and by most of the pro-Western electorate in Ukraine. After that, in November of last year, Zelensky said that a coup d’etat was being organized against him, in which one of the biggest oligarchs in Ukraine, Rynat Akhmetov, would take his place. However, these accusations disappeared quickly thereafter. While the experts were discussing who would be the next oligarch to be interrogated or punished, the Office of the Chief Prosecutor in mid December accused Poroshenko of treason. However, he had on time managed to hand his TV channels over to others, and thus managed to avoid his media sources being confiscated.

Unlike Medvedchuk, Poroshenko has strong ties with the US and the Western world in general. A day before the trial, the British Ambassador to Ukraine Melinda Simmons offered an explanation and said that they would closely monitor the court process. US State Secretary Anthony Blinken, during his visit to Ukraine, made a more cautious statement, saying “I cannot comment on this matter in detail. I can say that it is very important that in any case—in this case or another—legal proceedings, the rule of law, be ensured. As we say, without fear and beyond reproach. There can be no favorites and those persecuted. So that the rules are equal for everyone“. He also said that the Ukrainian people should unite “in the face of Russian threat”.

The statements of these western statesmen show that they are more or less ready to ignore some of the developments in Ukraine, while the current Ukrainian administration also proves itself to be pro-Western. Amid the “Russian threat”, they don’t want to interfere with the internal conflicts among the pro-Western politicians of Ukraine. However, if Zelensky’s administration decides to distance itself from the US and from the UK, they may raise their voice on the Poroshenko issue. However, as long as the current administration conforms to their policy and expectations, they are ready to cooperate.