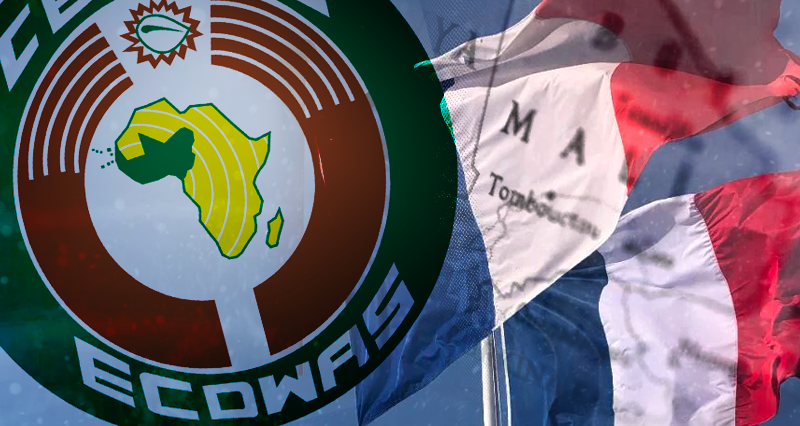 Last Sunday, January 9, the West African integration association ECOWAS (Economic Community of West African States) announced the imposition of sanctions against Mali. ECOWAS justified the sanctions formally with the refusal of the Malian government to hold elections in the country this year. The country’s ruling senior military had asked to postpone the elections until 2025.

Sanctions against Mali would include:

– Suspension of any commercial transactions with Bamako, except for essential goods and medicines,

– Calling back ECOWAS ambassadors from Mali.

Background to the sanctions

In Mali in 2020, a patriotic military overthrew the pro-French President Ibrahim Boubacar Keita. The take-over followed popular mass protests against Keita’s policies. He and his French allies could not cope with the terrorist threat in the Sahel. Since French troops entered Mali in 2013, the terrorists’ area of operation has expanded from the predominantly Tuareg and Arab-populated north to the central regions. France has demonstrated its ineffectiveness in combating terrorist groups.

In response to Mali’s attempted withdrawal from the French sphere of influence, the ECOWAS imposed sanctions against Mali for the first time. The West African integration body is often accused of being a tool in the hands of Paris rather than defending the interests of its people. Now, de facto ECOWAS has returned to the format of sanctions that were imposed on Mali at the time of the transition to military power in August 2020.

The Malian transitional authorities condemned the re-imposition of sanctions, declaring these “illegal. In response, they decided to recall their ambassadors from ECOWAS countries.”

However, it is unlikely that the return of sanctions will affect the Malian authorities’ position. The same sanctions could not change Bamako’s determination to review relations with Paris.

Experts note the untenable nature of ECOWAS claims against Mali and the absurdity of the sanctions. Grit Lenz, coordinator of the civil-society network Focus Sahel, notes that the people of Mali are in favor of extending the transition period. The Malian authorities must first ensure security and then hold elections.

“ECOWAS presidents, some of whose governance is anything but democratic, punish Mali with harsh sanctions for not holding elections immediately. Many voices from Mali, however, advocate a longer transition process for a chance at sustainable change”, Focus Sahel noted in its Twitter account.

Ghanaian security analyst Adib Saani agrees with Lenz. “I am wondering how ECOWAS expects Mali to be able to conduct a free, fair election under such circumstances,” Saani told DW.

The sanctions against Mali are absurd and constitute in fact a revenge for the country’s attempt to leave the French sphere of influence.

Moreover, the current sanctions were preceded by a serious crisis between France and Mali. Mali dared to invite Russian military experts to the country and expand military and technical cooperation with Moscow to fight the terrorist threat. France tried to dissuade Mali from taking this step, but did not succeed. In January, the first Russian instructors arrived in Mali and began training fighters for the republic’s government army. France then decided to punish Mali with sanctions.

As the French publication La Croix notes, sanctions against Mali are a “risky adventure.”

French analyst Laurent Larcher emphasizes that the ECOWAS had already used a similar mechanism in Côte d’Ivoire during the post-election crisis of 2010-2011, but only the French invasion of the country was able to oust Laurent Gbagbo.

In Guinea, after the military overthrew President Alpha Condé in September 2021, the country is also under ECOWAS sanctions. These sanctions, confirmed on December 16, have so far “had no effect,” notes La Croix.

Not all countries in ECOWAS are ready to support an explicitly pro-French line. For example, Senegal was initially against a hard line on Mali.

“Moreover, the regional organization does not enjoy unanimous popular support. Distant positions prevail not only in Mali and Guinea. Situation is similar in Gambia and Côte d’Ivoire,” Laurent Larcher notes.

Note that in recent months, anti-French sentiment has been active in most West African countries. In November, the population of Burkina Faso opposed the presence of soldiers of the Fifth Republic in the country. Thousands of residents of Burkina Faso and Niger took part in the blockade of a French military convoy that tried to enter Mali.

One of the leaders of the pan-Africanist movement, Kemi Seba, had a meeting late last year with the new military leader of Guinea, Colonel Mamady Doumbouya. Earlier he had been active in supporting the Malian authorities. Now he is organizing mass protests in African countries against the sanctions against Mali. The protests are to be held on January 22, 2022.

“The ECOWAS sanctions against Mali are the sanctions of the West and its African henchmen against an Afro-sovereign state – a state that wants to distance itself from the West and follow other paths. The persecution of Mali is unacceptable to us and we will not let this injustice pass,” Kemi Seba said.

Sanctions against Mali could raise another wave of resentment against French neocolonialism in Africa, turning the local population even more against Paris. The states of Africa are tired of Paris and its proxies, and therefore the former metropolis should prepare for the complete destruction of the Françafrique system.

The end of Françafrique

In early January, The United States has expelled Ethiopia, Mali and Guinea from access to a duty-free trade program. The justification was accusations of human rights violations and military coups.

At the same time, both the US and France demonstrate double standards. For example, they didn’t impose any sanctions against Chad, where the military led by the son of the former dictator Mahamat Idriss Deby Itno is in power. The reason – Chad remains a stronghold of imperialist hegemony in Africa, working with the French to destabilize Central Africa and helping French contingents in the Sahel.

The election of President Alassane Ouattara for a third term in Côte d’Ivoire in 2020 with 94.27% of the vote did not cause any protests from the French or Americans, although he had previously promised not to run for president, and in 2016 he changed the constitution to suit him. The fact is that Ouattara was brought to power by the French and is now France’s key partner in the region. For the sake of this, Paris can forget about democracy. But by supporting dictators and anti-national elites in African countries, Paris destroys its credibility.

“France’s military intervention in Mali after the destabilization of Libya marks an important step in the militarization of the run on Africa, the enterprise to control the continent’s richness in the name of the war on terror and the not-so-often-admitted war against migrants. ‘The war on terror is the only justification of our presence demanded by the Malians and the ECOWAS’ assured the French authorities,” noted Aminata Dramane Traoré, former Minister for Culture and Tourism of Mali.

Other African countries display similar attitudes against France. Sanctions against Mali will push the country itself and other regimes on the continent (or opposition movements) to look for alternative allies that can help fight the hegemony of France and the United States. These could be Russia and China, but also Turkey. Ankara has friendly relations with Bamako, supports Addis Ababa in its confrontation with the West and in its fight against separatists and, in general, is increasingly asserting itself in Africa.

As Grit Lenz notes, Mali is already re-orienting “toward Russia, China, and Turkey in the area of security policy”. In his opinion, sanctions can only weaken the Western position, which may lead to the country’s withdrawal from the French bloc ECOWAS.

Mali’s closest neighbor, Niger, has already declared that it needs Turkey’s support in fighting terrorism. A military cooperation agreement has already been signed between Niger and Turkey. It is not difficult to imagine a scenario in which Niger, strategically important to France because of its uranium reserves, also reorients itself toward countries that offer fairer relations, such as Turkey. This would be a sign of the end of Françafrique. And no sanctions will stop this process.