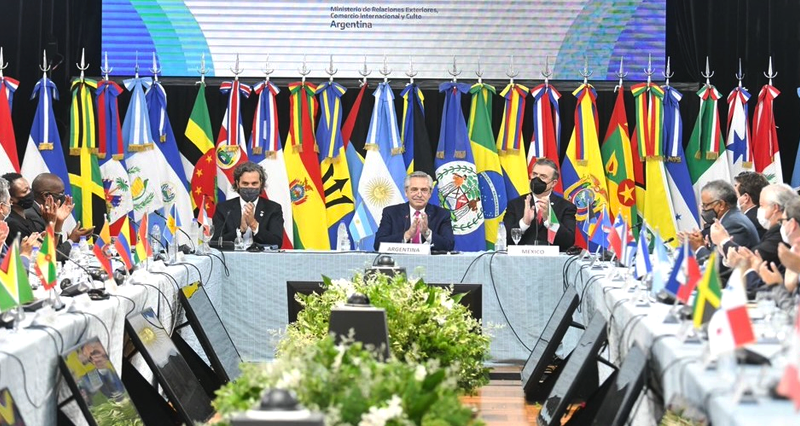 The Argentine national context, in which the XXII Meeting of Foreign Ministers of the Community of Latin American and Caribbean States (CELAC) was held on January 6 and 7 was marked, mainly by the following topics: 1) the exponential increase of Covid19 case numbers, due to the rapid expansion of the Omicron variant and the high traffic of local tourists in the middle of the holiday season; 2) issues concerning the 2022 economic agenda (the dollar and the stock market, price controls, encounters with the opposition over the 2022 Budget, negotiations with the IMF, etc.) and 3) the scandal over the (illegal) setting of court cases during the presidency of Mauricio Macri. This has become known as the “Gestapo” of the PRO, and is another proof of lawfare in the southern country.

Despite the conflictive situation and the perception of fragility within his government, Alberto Fernández has gained a new victory in the international arena: assuming the CELAC PPT. He has achieved this thanks to his pragmatism and political reformism, two characteristics the Argentine president himself proudly claims to have and which – beyond appearing to take “lukewarm” or little compromised positions – have allowed him to reinforce an atypical leadership with international projection, especially in Europe and the United States, but also in some countries in our region.

Even the local opposition media had to acknowledge that Argentina’s take-over of the CELAC Presidency represented a great achievement for Alberto Fernández. However, they soon began how that happened and who was responsible. Their hypotheses ranged from “health diplomacy or vaccines”, deployed especially in the Caribbean, to the endorsement of Nicaragua’s Commander Daniel Ortega in exchange for a greater participation of delegations to his government inauguration, this January 10, 2022.

In relation to this, LPO, a local digital media, asserted: “What ended up eliminating the competitor of Argentina, Saint Vincent and the Grenadines from the race was the donation of 11 thousand vaccines. This was extended to other Caribbean countries such as Saint Lucia, which received 18,000 doses, Dominica (2,000) and Grenada (11,000).” This argument lacks of logic, because if Argentina had to convince SVG with vaccines: why give more doses to Santa Lucia? In addition, the vaccine donations produced jointly between Buenos Aires and Mexico City, always contemplated Latin America and the Caribbean.

Regarding Nicaragua’s change of position, a surprise to itself and others, La Nación found “the dictatorships of Cuba and Venezuela” were responsible. Last November, Argentina “avoided condemning the fraudulent elections,” the same month it supported an OAS resolution “that condemned the electoral farce mounted by Daniel Ortega,” said this right-wing media perplexed. And it added: “Yesterday (01/07/2022) Fernández managed to get the Ortega regime to support – after the mediation of the dictatorships of Cuba and Venezuela – his candidacy for the Pro Tempore Presidency of CELAC.”

Together for the change

Other media replicated the opinions of some members of the opposition party Juntos por el Cambio (Together for the Change), who, referring to the fact that the presence in Argentina of High Representatives of Cuba, Nicaragua and Venezuela, in the framework of the XXII CELAC Meeting, “is detrimental in the middle of negotiations with the IMF”.

This statement produces indignation and shows the degree of incoherence of the opposition leaders, who, last December, rejected – for the first time since the return of democracy – the 2022 Budget, which not only hinders negotiations with the IMF. Moreover, it is a clear boycott against the administration of the Frente de Todos, which even affects opposition governors, and over all the vast majority of Argentinian population.

At the beginning of the 1980s, the Contadora Group (Colombia, Mexico, Panama and Venezuela) was formed with the purpose of promoting peace processes in Central America. Currently, Mexico and Argentina intend to mediate to normalize the foreign relations of -among other nations – Nicaragua and Venezuela with Latin American and Caribbean countries, as well as with the United States and the European Community.

In this sense, both the Argentine President and Foreign Minister Santiago Cafiero mentioned of the Contadora Group on several occasiones in speeches, in what seems to go beyond what they recognize as “the origin” of CELAC. It should be remembered that, during his visits to Europe, Alberto Fernández is usually consulted by his counterparts from the old continent about the “state of the art” in Latin America and the Caribbean, particularly in Nicaragua and Venezuela.

Under this assumption, perhaps the true maker behind Fernández’s arrival to the presidency could also have been his main ally in the region, Andrés Manuel López Obrador. The role of Mexico was widely recognized and highlighted by all delegations. One of AMLO’s interests would be to regain a distant but longed-for regional leadership for Mexico. For some Mexican diplomats, after the role that this country played in the Contadora Group, Mexico never again took an initiative of such regional relevance.

In fact, in the reestablishment of diplomatic relations between Cuba and the United States during the Obama administration, the main mediators were Canada and the Vatican. This left aside, among other things, the rich history and cultural closeness that unite Mexico with Cuba.

In addition to the agreements signed and the proposed Work Plan submitted by Argentina for the consideration of the CELAC member states, the general balance of this XXI Meeting of Foreign Ministers has been highly positive, since it has implied the revitalization of a multilateral space that has been strongly attacked by right-wing governments in the region (so much so that, in 2020, Bolsonaro announced the withdrawal or suspension of Brazil from CELAC) and that – at a functional operational level – it has also been affected by the world economic crisis deepened with the arrival of the pandemic.

Certainly, for Alberto Fernández, the CELAC PPT is the most suitable platform to advance the consolidation of his regional leadership, this Pro Tempore Presidency being his greatest achievement so far. However, we must not forget that he has been working for it since before his arrival at the Casa Rosada: with unconditional support for Evo Morales or with a visit to Lula, while he was still in prison. He was also the first president to greet – and indirectly recognize – Castillo as president of Peru, when Keiko Fujimori called the elections fraudulent.

In this sense, in addition to the recent changes in Chile and Honduras, and with those that date a time back in Peru, Bolivia, and even in Mexico and Argentina, the expectation is rising to see changes of governments in Brazil and Colombia come true. Above all, these last two countries, due to their geo-economic and geopolitical importance, can make a significant contribution to the regional integration project, thus increasing the attractiveness of the capacity for understanding and cooperation (economic, political, social, cultural…) through the Community of Latin American and Caribbean States.

Finally, it may be that, within the framework of a predominant pragmatism and from a “realistic and friendly” perspective of International Relations, for Argentina and Mexico, CELAC, as a genuinely Latin American multilateral space, may represent possibilities of projection of regional and international leadership for these strategic allies. However, for the revolutionary and alternative processes of Our America it is a new possibility to continue advancing in the dream of Sandino, Bolívar, Martí, San Martín, and so many other heroes and heroines who gave their lives for the emancipation and for breaking the imperial ties.

In our days, we must always remember the Bolivarian Revolution, because it was the Bolivarian Republic of Venezuela, which made the Community of Latin American and Caribbean States (CELAC) possible. In fact, for Venezuela, the resurgence of CELAC in the regional scenario is of vital importance, since it has been the Bolivarian commitment, after Venezuela left the OAS. We must not forget that CELAC, together with UNASUR, PetroCaribe and ALBA, is part of Commander Hugo Chávez’s legacy in terms of regional integration.