Political and economic independence is decisive for development 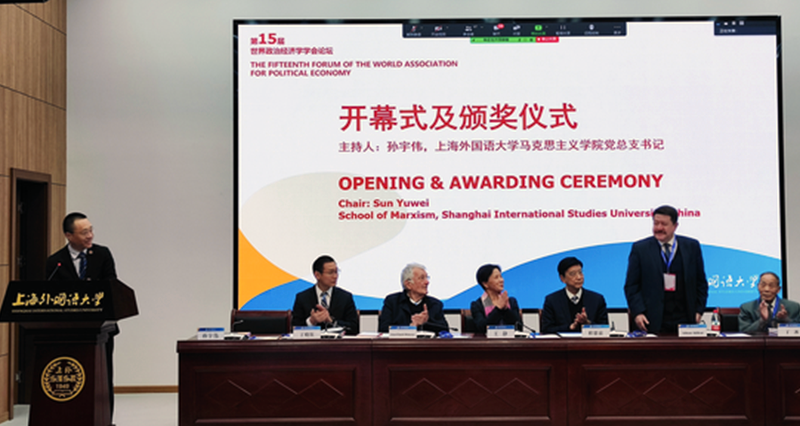 The World Association of Political Economy (WAPE) has organized in cooperation with the Shanghai International Studies University (SISU) its 15th annual forum on December 18 and 19 in Shanghai, People’s Republic of China. The forum was titled this year “Rethinking economic analysis: Perspective of political economy”. Sessions were organized both online and in presence.

More than 300 hundred speakers from 40 countries attended the forum, including researchers from China, Cuba, Russia, Brazil, the U.S., India, Canada, France, Germany, Japan, Greece and Turkey. The forum took place as a meeting of who’s who of global Marxist political economy.

In the forum, several participants from Turkey also made presentation, which were followed closely and with great interest as the country is currently witnessing a currency crisis. Among the Forum’s Turkish participants were also United World International experts.

As the Turkish economy is being closely followed worldwide, UWI will present in the coming days the speeches held by Turkish participants on the WAPE forum.

Today we present the speech of UWI expert Adnan Akfırat. During the forum, Akfırat was elected to become a Council Member of the WAPE.

After a long war of independence, Turkey went through some radical political and legal changes. Despite the terrible economic situation, Turkey obtained significant success as a result of the exuberance of the new Republic. The 1929 economic crisis had a big impact on the Turkish economy when prices in the agriculture field dropped. Like many nations in a similar situation, Turkey planned to undergo a new economic policy rooted in self-sufficiency. Hence, new measures were taken to encourage the nation to consume local products and start saving, and a number of campaigns were launched to accomplish this task. Turkish women had a special mission in this struggle: they started to take their place socially and economically in the modernization process of the Republic, and had an active role in bolstering the national economy.

As a result, Turkey experienced a miracle in development, much like China did in the 90s.

Let’s take a look at the growth rates:

With the economic policy that Turkey followed under the leadership of Kemal Atatürk, it built an independent national economy that stood on its own feet. In the 1940s, Turkey was able to create an industry that could export aircraft to European countries.

Turkey, which avoided being occupied by Nazi imperialism by remaining neutral in World War II, was still negatively affected economically by the war years. After the Second World War, the executives of the ruling People’s Republican Party (CHP) abandoned Atatürk’s independence and national sovereignty policy and jumped into the arms of the Atlantic system. Starting from 1946, Turkey abandoned what it had gained through the revolution with the dream of becoming a “Little America”. The Turkish government made an agreement with the IMF on March 11, 1947, and left the management of the Turkish economy to them and the World Bank. Atatürk’s industrialization and enlightenment policy based on national resources was abandoned. Turkey had become an extension of the economy of the US and Europe.

There is a clear example that demonstrates the change: in the first 10 years after the revolution, Turkey began to become covered in networks of iron, much like China did. Kemalist Turkey established a strong railroad industry, including locomotives. After coming under IMF control, Turkey completely stopped the construction of the railway and turned to developing highways. It became a market and contract manufacturer of spare parts for the auto industry in the US and Europe. Eventually, Turkey’s exports became completely dependent on imports.

After 70 years, this developed into an unsustainable economy. Turkey transferred all of its state enterprises to foreigners through privatization. In 1980, under the name of “integration with the world economy”, Turkey’s foreign exchange regime was changed, and Turkey’s domestic market was left to the dominance of the American dollar. Currently, 65% of Turkish citizens’ deposits in banks are in dollars. Turkish citizens had abandoned the Turkish lira; even grocery shopping is done with a  foreign currency. The Central Bank of the Republic of Turkey was integrated into Wall Street, because doing so was “a requirement of economic science”. After the low exchange rate and high interest rate policy, the Turkish economy became overly dependent on hot money.

Turkey’s borrowing needs have become the determining factor of both Turkey’s domestic and foreign policy. Policies that even the rulers of Turkey were against could be approved as a result of this imposition.

Let me give you a striking example: Erdogan’s initiation of a peace process in 2011 with the PKK terrorist organization, which is under the full control of the US. The PKK started negotiations with the Turkish government without laying down its arms, and the government ordered Turkish security forces not to take action against the PKK’s attacks for four years. As a result of this policy, the PKK brought its legal arm to the parliament and dug trenches in the local administrations under its control to fight the Turkish army with municipal resources. In the elections of June 2015, Ak Parti voters reacted to this trend and for the first time since 2003, the AKP failed to gain the majority to form a government in the elections. Erdogan acted in line with the Turkish Army’s initiative to suppress the PKK with weapons, and re-run the elections soon after. Five months later, in the November 2015 elections, the policy of fighting the PKK brought Erdoğan a majority to form a government on his own.

However, since then, the Turkish economy has been in constant crisis. In the background of these upheavals, former US President Donald Trump issued a bombastic threat.

“As I have stated strongly before, and just to reiterate, if Turkey does anything that I, in my great and unmatched wisdom, consider to be off limits, I will totally destroy and obliterate the Economy of Turkey (I’ve done before!) […]”

An imperialist bandit can make such threats if you lose the mechanisms you need to protect your national independence. The critical point is that Trump has the tools to do what he says.

On December 1, 2021, President Erdogan stated: “Since 1947, when our country made the first agreement with the IMF, our economic policies and mostly in connection with it, our political policies have been under the control of this global system. Turkey will never again submit its political and economic future to the prescriptions of the IMF and similar global economic tutelage institutions.”

Erdogan did not just say these things, he declared that “Turkey will take China as an example in development”. His words were the headline of the biggest newspaper of Turkey on December 3. Erdogan’s bold statement drove the Atlantic front into a frenzy. The opposition left other issues on hold and went on the counter-attack to defame China. Turkey has been discussing China’s development miracle for 10 days.

The unique heritage of the Turkish Revolution

Turkey has been fighting for two centuries against the expansionist capitalism and imperialism of the age of international commerce. This is a unique heritage. It is a unique accumulation of valuable experience and a unique source of self-reliance.

For two centuries, we have been fighting to complete the populist national revolution of Turkey and to create an independent, free and modern society.

We owe our national state, our Republic, our national unity, our territorial integrity, our existence and our enlightenment to the Turkish Revolution.

The seventy-year-old experience we have left behind has shown us that, due to relations across the Atlantic, we have been gradually losing our national state, our national unity, our territorial integrity, and our Republic, which is based on the public good and modern values. This historic lesson teaches us that there is only one way forward for our nation, for survival. The blend of dependence on the Imperialist System, individualism and personal interest we call liberalism is not a solution for Turkey. The only solution for our nation is to progress on the road opened by the Turkish Revolution.

The programme of the Turkish Revolution was formed through national practices which answered our nation’s need for independence, freedom and modernization over the course of two hundred years.

In the 21st century, the strategy of unipolar imperialist globalization to destroy national states has been defeated at great cost. Multilateralism has become a determining factor in international relations.

It is a central tenet of multilateralism that we pursue economic cooperation rather than dependency. This model, in which only the center wins and the periphery always loses, has gone bankrupt. The neo-liberal looting system is destroying our planet. Humanity has to create a common community that will protect its future by acting together.

With the contributions of President Xi Jinping, an international mechanism is being created that will enable nations to “develop by sharing”, fostering relations based on equality and respect. The Belt and Road Initiative, the largest joint venture in human history, is so popular because it responds to the common aspirations of humanity. It is a new type of relations model based on the economic strength of each nation, adopting equality, respect and joint development as a basic policy.

The great revolutionary Atatürk, the founder of the Republic of Turkey, expressed his hope and longing for the future on March 27, 1933, as follows: “Colonialism and imperialism will disappear from the earth, and a new era of harmony and cooperation will take their place, in which no color, religion or race discrimination is observed. ” (Collected Works Of Ataturk, V.26, 2009, p.143.)

Atatürk’s dream is coming true. Turkey will be in a leading position in the equal, equitable and collaborative rise of humanity. Our only request is that you give Turkey your trust. By defeating imperialism at the beginning of the last century, Turkey set a bright example for the developing world. Turkey, which is still in the process of revolution, will take a leading position in the new century.