The elections in Chile and the Plan Cóndor 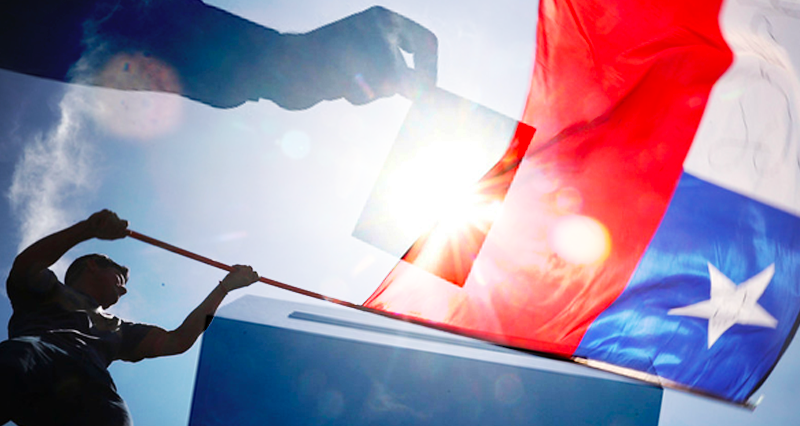 The Condor Plan was conceived to maintain the power of Washington, in those countries of the South American cone and when these criminal policies were fought and popularly repudiated and lost their usefulness, the United States changed strategy and tactics. It is from there, that Washington practices the philosophy of “ do what I say, but not what I do.” And they become a defender of “democracy, the defense of human rights and free expression.”

The terror sown with these dictatorships and the possibility of losing power, forced Washington to modify its plans and after the dark documents of Santa Fe I and II, during the government of Ronald Reagan, a new era of domination began through the control of the media, which has been intensified by technological advances and the use of so-called social networks – the vast majority of them financed by and at the service of the United States.

An example of this policy has been Chile, a country that by the way was one of the main leaders of the Condor Plan, where the coup leader, Colonel Manuel Contreras, stood out with great force and power, who planned and executed several assassinations. He assassinated the former Foreign Minister Orlando Letelier in the United States, General Carlos Prats González in Buenos Aires, Argentina and the Christian Democratic leader Bernardo Leighton in Italy.

I learned from several friendly sources in Chile that, in the face of the danger of losing the upcoming elections, the far- right candidate José Antonio Kast has hired Venezuelans and Cubans, anti-Chavistas and Cuban counterrevolutionaries, to vote for him and campaign against the Castro-Chavismo and the rising communist danger if his opponent wins. This is something similar to what they did in Colombia, when the plebiscite on the peace accords took place. Incredibly and for the first time in the history of humanity, the population voted to go for war and against peace. And now they mourn their mistake with a mountain of the dead.

Kast has asked them to work on his behalf and as helpers at polling stations, thus attempting to control the process. He has offered them a payment of $ 60,000 Chilean pesos, or about $ 70 a day. He asked them to organize protests in front of the Venezuelan and Cuban embassies and to denounce that the officials of those embassies were intervening in the elections in favor of his opponent and manipulating the voters. Concerning the Cubans in Chile, he promised them permanent residence visas in the United States if he wins the elections.

In other words, they use social networks and the Chilean media, most of which belong to the right and extreme right, inserting these Fake News and instilling hatred of communism. This reflects the slogan of “CastroChavismo”, created by the paramilitary narco ex-president Uribe Vélez. Incredibly, this propaganda has spread out throughout the whole continent.

Next Sunday, December 19, the voters will go to the polls to elect the new President of the Republic of Chile in the second round. In the first round, the difference between the leading two candidates was 2%, whereby José Antonio Kast won by 28% and his contender, Gabriel Boric received 26%. That means that the rest of the 100% of those who went to the polls, that is 46% of the vote was distributed among the other candidates who appeared in the first round and who will surely call to go to vote again.

This electorate of 46% of the votes will be the one determining the victory of one of the two candidates. The result remains unknown for the moment, because the published polls present both candidates as very even. Kast is a furious defender of the dictatorship of General Pinochet, and defends even ore aggressive positions than the Pinochetist and neo-Nazi-leaning politics. Boric meanwhile presents himself as a representative of progressivism and some even consider him representative of social democracy, due to the support received from former president Ricardo Lagos.

The level of abstention in the first round was very high. O the 15 million registered voters, only 7 million 115 thousand went to the ballots. This means that 47.34% of the electoral roll of voters and therefore 53.6 of the electorate abstained from voting. We must consider the idea that, in the face of the two opposing political and economic positions, in a second round the level of abstention will be lower and in that case, the hypothesis can be raised that Gabriel Boric would be the winner of the contest, since the greater discontent is in the sectors that feel cheated by the unfulfilled promises of previous governments.

Boric is a young man of barely 35 years and this can be an element in his favor. Moreover, beyond the indications that he may or maybe not representing positions of a social democrat, abstention, blank or null vote only will support the candidate of the extreme right and the continuity of Pinochetism. “The people must wake up and gain the conscience whether we really want to have a participatory democracy”, said former President Salvador Allende in 1965, when he lost the elections that year.

He is alerting his people even after his death.

On the other hand there is an economic crisis in this country, well displayed on data by the brilliant journalist Manuel Cabieses in his article “Boric and the Plan B”. Cabiesespoints out that in “Chile there is misery and wages of starvation. More than 81 thousand families live in 969 camps that lack basic services, such as potable water and sewerage. One million unemployed and 600 thousand young people do not study or work, while narcotics have become common in all spheres of society and dominate population sectors, including municipal authorities, the police and judiciary.”

Let us hope that the Chilean people take into account the memories of what was the Pinochet dictatorship and what has happened with governments that caused deaths and very serious mutilations in their population, including the Mapuche, using the public force, especially the carabineros, as has been the case with the outgoing government of Sebastián Piñera.

As serious as what has already been mentioned, it is constituted by the controversial proposal of what will be the cultural policy assumed by the candidate Kast and suggested by his cultural advisor, the extreme-right painter Ximena Cousiño Prieto. Prieto proclaims from the rooftops that they will privatize Chilean culture. She speaks out for social exclusion and against an inclusive policy of gender, she supports the prohibition of abortion and defends the policy of State Terrorism, arguing that the military criminals imprisoned in “Punta Peuco” were innocent. She is the enemy of changing the current Pinochet Constitution and a prominent member of Opus Dei. She is the wife of the billionaire Matías Pérez Cruz, president of Empresa del Gasco. With such an elitist cultural policy excluding the people, Chile will return to the darkest times of fascism in Hitler’s Germany.

Chile deserves to get out of this dark past and close forever the chapter of the Condor Plan, which is undoubtedly being executed today in that southern country, managed and directed by US agencies, such as the CIA, USAID and the NED with the purpose of favoring to the candidate of the extreme right.

* Journalist, political scientist and anaylst of international policts. This article was first published in PIA global. Translation by Yunus Soner.