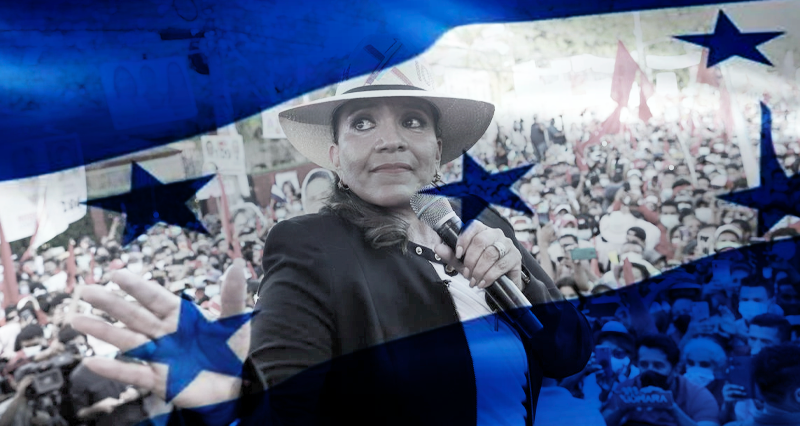 Xiomara Castro de Zelaya, candidate of the Free Party (Partido de Libertad y Refundacion – LIBRE) for the presidential elections of November 28, seems to have achieved a landslide victory. Though official results have not been announced yet, Castro, who calls herself a “democratic socialist”, has a lead of 20% over the next competitor with more than 50% of the votes counted.

Castro has already declared herself the winner, while her supporters took to the streets in various cities of Honduras to celebrate electoral victory. “Thank you people! We turned 12 years of tears and pain into joy. The sacrifice of our martyrs was not in vain. We will initiate an era of prosperity of solidarity through dialogue with all sectors, without discrimination and without sectarianism”, stated Castro via twitter.

Castro referred with the “12 years” to the 2009 US-supported coup, which had ousted her husband, Manuel Zelaya, after 2 and half years of governance from the presidency.

But not giving up the political struggle, Manuel Zelaya has ultimately been the National Coordinator for LIBRE and active in managing the campaign of his wife.

In her first speech on Sunday, announcing victory, Castro said: “We are heading toward a direct and participative democracy. I call on the opposition and all sectors of the Honduran society to dialogue.”

Her road to victory

Xiomara Castro de Zelaya has been First Lady during the years 2006 – 2009. When her husband suffered a coup, she led massive protests in the country demanding his return to power.

Afterwards, she became active in the Popular Resistance movement and candidate 2013 for the Presidency, supported by LIBRE, where she lost against the candidate of the National Party.

In 2017, she entered electoral campaign again, this time for the position of the Vice-Presidency. The main candidate, Salvador Nasralla lost under much disputed circumstances, when he was leading when electricity and counting stopped for 24 hours. When counting continued, the candidate of the National Party was in advance out suddenly.

In 2021, the National Party again announced a victory right when the ballots closed. But following preliminary results, various sectors of society, including the chamber of commerce, congratulated Castro.

Main topics of the campaign

The electoral campaign was dominated by the topics of poverty, economically forced migration to the US, corruption, narco-trafficking and previous frauds in elections.

On the campaign trail, Castro promised to “pull Honduras out of the abyss we have been buried in by neoliberalism, a narco-dictator and corruption,”

The brother of the outgoing President, Tony Hernandez was sentenced in U.S. federal court this year to life in prison plus 30 years for drug trafficking.

Prior to the elections, Castro has announced her “Governmental program for the re-foundation of Honduras”. And it is a very ambitious one!

Point number 1 is: “Construction of the democratic socialist state”. Castro announces the election of a Constitutional National Assembly, which shall establish a “new social pact” and draft a new constitution.

Direct democratic participation, that is referendums of the “organized citizenship” are declared “main pillar” of the government.

End of neoliberalism and transition to planned economy

In terms of the economy program, Castro proposes several points that limit market forces and introduce steps towards a socialist economy. These include: Recovery of state-owned-enterprises, creation of a Ministry for Social and Economic Development Planning, re-opening of BANADESA, a state-owned bank to support the agricultural and informal sector directly, re-negotiation of foreign debt and new taxes on “grand financial capital” to finance employment.

And these proposals are presented as the program “for the first 100 days”!

The governmental program includes more radical changes also in the foreign policy of Honduras. Point number 1 of the LIBRE government, declaring that “defense of national sovereignty and international solidarity shall be the main axis”, is to establish diplomatic relations with the People’s Republic of China – instead of the current relations with Taiwan.

The outgoing President Hernandez had visited Taiwan beginning of November and Chinese media reported that Taiwanese Democratic Progressive Party has attempted to influence the Honduran elections via social media networks.

Generally, the foreign policy is placed into the line of Simon Bolivar and Fransisco Morazan, both symbols of Latin American integration, and the program declares that Honduran diplomacy will support “central American integration as part of a progress to regional union”.

Within that context, Castro proposes to unite the diplomatic service of Honduras with other countries of Central America

Cuban President Diaz-Canel Bermudez said “12 years after the coup against Manuel Zelaya, the people of Honduras achieved a victory at the ballot boxes. Latin America and the Caribbean celebrates with you Honduras.”

Former Bolivian President Evo Morales, these days on a march in support of the current government in La Paz, who was victim of a US-supported coup tweeted: “The vote is the people’s victory over the coupism of the Yankees”.

The electoral victory of Xiomara Castro promises to bring back socialism even more on the Latin American agenda, while causing an earthquake in the US’ former backyard over relations with China.

How far she can advance her program and what resistance she will meet, remembering that her husband was ousted 12 years ago due to a similar political line, remains to be seen.