The times are changing: The fall of the West and the rise of the East! 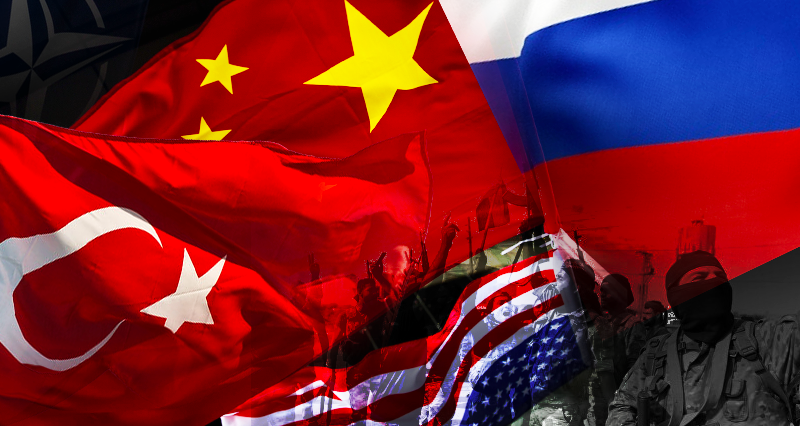 We are gradually leaving behind the era, when the USA and the European Union had created international institutions and organizations as a center of gravity and were able to design the whole world using these structures.

Having a great influence in the “military” and “economic” areas over African and Middle Eastern countries, the West has always pursued policies of intervention using different justifications, from the so-called “democracy” tales to “human rights” and “dictatorial administrations”. The West has always united against the East, even though it had various problems among its members.

The process of the pandemic, the advantages of the globalizing and digitalizing world, and the fact that the peoples of these geographies have become a more effective force in their country’s administration has brought about a “new reality”: the end of the order established by the West. Hence, the West is rapidly losing its sphere of influence.

This system, which has been running almost smoothly since 1945, is actually a “hegemonic” system that was built entirely on the survival of the West and its allies. If a country wanted to be part of this system; especially conceding economic openness, taking part in the dollar-based financial system, allowing Western military presence when necessary, acting in line with Western interests in regional problems were essential.

Resistance to this system is responded with a Western ‘punitive policy’. With its broad diplomatic, financial, institutional, military and intelligence tools, the West responds with a “punitive policy” of varying scale and scope towards countries, and most of the Western “allies” also reluctantly joining these punishments.

This Western alliance, and especially the USA, knows very well what happened to the hegemonic powers before it, the Netherlands and England. Because when we look at history, hegemony works in parallel with the crisis cycles of capitalism. The economic crisis’ in hegemonic states give rise to new hegemonic challengers, and this happens as a cycle.

Being aware of this today, the West is trying to be a “cycle breaker”, so to speak, and is becoming increasingly aggressive so that the system it has established does not fall apart. Moreover, Russia is relatively regressing in the face of new emerging powers such as China and Turkey.

And now it has become obvious that this order established by the West is facing a great destruction. To state it clearly, ‘The spear doesn’t fit in the sack’, as a Turkish saying goes.

The West, which re-established its sphere of influence with military operations and occupations in countries and areas that had a tendency to escape its influence until the first years of the 2000s, has completely transformed this situation into wars as a result of ‘economic’ and ‘internal pressures’, especially in the last 10 years.

They tried to maintain the order they established through “proxy terrorist organizations” and “recruited leaders”.

As a matter of fact, there have been countries and areas where these new strategies have been effective. Especially during and after the ‘Arab Spring’, they tried to maintain their influence by using ‘recruited leaders’ in countries such as Egypt and Saudi Arabia, and by using ‘proxy terrorist organizations’ such as PKK and DAESH in places such as Syria.

Turkey has now been added to the countries that have taken great steps to reverse this order established by the West, just as Russia and China. As a regional power, Turkey reveals the ‘Turkey Axis’ by developing its own policies at many locations considered to be under Western influence.

Turkey was kept under the control of the West and its international organizations in the post-Cold War period. With NATO, EU, IMF and similar institutions, Turkey has always been pushed to a controlled growth or shrinkage. Turkey has been “trained” in line with the interests of the West, with economic crisis when appropriate, and with coups, which is the favorite method of Westerners.

As a matter of fact, Turkey’s independent policies and efforts to create its own axis have disturbed the West recently, and Turkey has been tried to be kept ‘under control’ with structures such as the PKK and FETO. And again, through these ‘proxies’, a coup was attempted in 2016, as in the 1960s and in the 1980s. Then they increased their attempts to squeeze and control Turkey through the economic order they dominated.

But it seems that the vision of the ‘New Turkey’ has been underestimated!

The “New Turkey”, in addition to being an alternative, is a country that promises a new hope and a new model to all parts in the East-West and North-South fields. It is also messing with the “New World Order” of the West.

Turkey, which has a wide sphere of influence from Africa to the Mediterranean, from the Balkans to the Middle East and Asia, and which constitutes a role model especially for the peoples of Africa and the Middle East, has become a symbol of its upright stance against the exploitation system established by the West.

Despite all the pressures and obstacles, Turkey has achieved breakthroughs in the defense industry and has not allowed a terrorist state to be established on the borders of Syria. Its stability, its reflexes to protect its rights in the Eastern Mediterranean despite futile attempts by the West to be excluded from the equation, its vision of a fully independent foreign policy, and the relations it maintains with countries such as Russia and China in line with its own interests’ despite all kinds of pressure from the West, support the rise of the East.

The fall of the West and the rise of the East

In the light of all these developments, Russia, China and Turkey have begun to penetrate almost every point and topic that the West sees as an area of exploitation and influence, and they have also increased their influence in the military and economic fields.

Although tensions between Russia, China and Turkey are sometimes high at various locations due to the fact that they try to create their own spheres of influence, they continue to take great steps one by one in overthrowing the hegemony of the West.

An East, which has evolved its regional problem-solving capabilities towards solving global problems, rises with the steps it has taken, from Africa to its activities in the Middle East and Asia, from defense industry breakthroughs to one generation and one road and economic impacts such as production, is shaking the system established by the West.