Exchange rate crisis; Release of Israeli couple; Crisis regarding the delivery of the Turkish F-35s 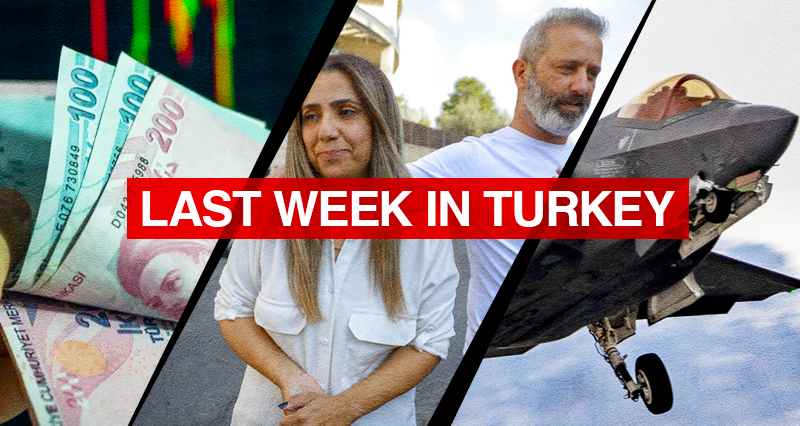 Last week the public agenda in Turkey has been busy with three main topics.

First was the sharp fluctuation of the exchange rates of the Turkish Lira, and the sudden 22% drop in value.

Second was the release of the Israeli couple Mordi and Natali Oknin, who had been arrested after taking photos of President Erdogan’s residence.

Third was the bill proposed to the US Senate by Bob Menendez, regarding a change in delivery of the F-35s that Turkey already had paid. Menendez proposed to deliver the aircraft to Greece instead of Turkey.

The Turkish Lira has plummeted more than 15% on Tuesday after President Tayyip Erdogan hailed the recent drops in interest rate and vowed to win his “economic war of independence”, despite widespread criticism and pleas to reverse course.

The Turkish Lira dropped as far as 13.45 against the US dollar, plumbing a record low for the last 11 straight sessions, before trimming some of those losses to close at 12.7015.

The Lira has lost 42% of its value this year, including a more than 22% decline since the beginning of last week.

Erdogan has applied pressure on the central bank to pivot to an aggressive easing cycle that aims, he says “to boost exports, investment and jobs”, even as inflation soars to near 20% and the currency depreciation accelerates, which causes to deeply hurt the Turkish citizens.

After a meeting between Erdogan and central bank Governor Sahap Kavcioglu, the bank issued a statement saying this selloff was “unrealistic and completely detached” from economic fundamentals.

There was no hint at an intervention to stem the meltdown. The central bank said it could only do so under certain conditions in “excessive volatility”.

Former bank deputy governor Semih Tumen, who was dismissed last month in the latest round of Erdogan’s rapid leadership overhaul, called for an immediate return to policies which protect the lira’s value.

“This irrational experiment which has no chance of success must be abandoned immediately and we must return to quality policies which protect the Turkish lira’s value and the prosperity of the Turkish people,” he said on Twitter.

Tuesday’s slide was the lira’s largest since the height of a currency crisis in 2018 that led to a sharp recession, and brought on three years of sub-par economic growth and double-digit inflation.

The central bank has slashed rates by a total of 400 points since September, leaving real yields deeply negative as virtually all other central banks have begun tightening against rising inflation, or are preparing to do so.

The lira has been by far the worst-performing currency globally this year due mostly to what some analysts have called a premature economic “experiment” by Erdogan, who has ruled Turkey for nearly two decades.

Due to this immense drop in value of the lira, Erdogan and his AKP government has lost a great chunk of their former support from the average citizens. The AKP is sliding down in opinion polls ahead of elections scheduled for no later than mid-2023, reflecting sharply higher costs of living.

Investors appeared to flee as volatility gauges spiked to the highest levels since March, when Erdogan abruptly sacked hawkish central bank chief Naci Agbal and installed Kavcioglu, who like the president is a critic of high rates.

The central bank cut its policy rate last Thursday by 100 basis points to 15%, and signaled another cut in December.

Erdogan received support on Tuesday from his parliamentary ally, MHP leader Devlet Bahceli, who said that high interest rates limit production and there was no alternative to a policy focused on investments.

“Turkey needs to get rid of the hunchback of interest rates,” Bahceli said.

Erdogan defended the policy late on Monday and said high rates would not lower inflation, an unorthodox view he has repeated for years. “I reject policies that will contract our country, weaken it, condemn our people to unemployment, hunger and poverty,” he said after a cabinet meeting, prompting a late-day slide in the lira.

However neither Erdogan nor his political ally Bahceli accepted early elections as an option.

“The opposition still calls for early elections. There will be no early elections. They will be held in June 2023. Going to polls every 15 or 20 months is only seen in primitive tribal nations. We are running this country as a modern entity,” Erdogan told the representatives of the AKP’s provincial branches at a party meeting in Ankara this Tuesday.

Devlet Bahceli stated “The only thing said by ignorant people, who do not understand the economy, is ‘early elections.’ In fact, they’re not prepared, they’re just like mischievous students who don’t study,” in his speech to the party’s parliamentary group.

Release of Israeli couple in Turkey

An Israeli married couple Mordi and Natali Oknin was detained in Turkey with charges of espionage for almost a week, which ended in their release and their return home.

Mordi and Natali Oknin, who are both bus drivers, said they were on holiday in Istanbul when they were arrested for taking photographs of the residence of Turkish President Recep Tayyip Erdogan.

Both the couple and the Israeli government denied the charges.

Their arrest had dominated the Israeli news headlines and threatened to become a damaging spat between the countries.

Mr Bennett was also expected to speak by telephone with Mr Erdogan on Thursday for what would be the first conversation between an Israeli prime minister and Turkish president since 2013.

A lawyer for the Oknins said they had instead taken photos of the Ottoman-era Dolmabahce Palace from a ferry.

“Thank you to the entire nation of Israel. Thank you to everyone who helped and supported and got us freed,” Natali Oknin told reporters after she and her husband arrived at Tel Aviv’s Ben Gurion airport on board a chartered private jet.

The couple was later greeted by a crowd of relatives and friends at their home in the city of Modiin.

Turkish media reported last Friday that the Oknins and a Turkish citizen were arrested after staff at a restaurant in the Camlica TV and Radio Tower, on the Asian side of Istanbul, told police that they had been taking pictures of Mr Erdogan’s residence.

A judge at a court in the city later charged Mr and Mrs Oknin with “political and military espionage” and extended their detention for at least 20 days.

An Israeli lawyer for the couple rejected the allegations and said they had merely photographed the waterfront Dolmabahce Palace, on Istanbul’s European side, during a boat trip. The palace has not been a presidential residence for decades, although parts of it are used as a working office.

Israeli President Isaac Herzog also said he was “convinced” of the Oknins’ innocence and emphasized that they did “not work for an Israeli agency”.

Israel’s Haaretz newspaper cited a source as saying a court had granted the couple’s appeal on Wednesday following intense efforts by Israeli officials to bring about their release.

Turkish officials have not commented on the developments, but Turkey’s DHA news agency reported that the Turkish citizen arrested along with the Oknins had also been released.

The crisis regarding the delivery of the Turkish F-35s

The US senator known for his anti-Turkish sentiments, Bob Menendez, has proposed a bill to the US Senate to offer Greece the F-35s, which Turkey has been a partner/client for. It is expected that the bill will be presented to the Senate assembly next week.

The United States, which has taken stands with Greece in the Eastern Mediterranean crisis, has taken a new action that will raise the diplomatic tensions with Turkey.

Menendez has submitted a bill to the Senate to offer Greece the F-35s, which were produced under the Joint Strike Fighter program along with Turkey, but whose delivery to Ankara was cancelled under the pretext of the purchase of the Russian S-400 air defense systems.

This proposed bill stated “The United States should, as appropriate, support the sale of F–35 Joint Strike Fighters to Greece to include those F–35 aircraft produced for but never delivered to Turkey as a result of Turkey’s exclusion from the program due to its purchase of the Russian S-400 air defense system”.

The bill, named the “US-Greece Defense and Interparliamentary Partnership 2021”, will probably be presented to the Senate assembly next week.

Democratic Senator Bob Menendez is an influential figure in the US Senate, for the Greek Lobby in America… Menendez, who is known for his anti-Turkish sentiments and statements, is also the chairperson of the US Senate Committee on Foreign Relations.

The US senator is also known to have led a campaign among the senators, where a letter was sent to US President Biden and the Secretary of State Blinken to stop the purchases of F-16 fighters for Turkey. Menendez also described the Turkish unmanned drones “dangerous and destabilizing”, and called on Biden to prevent Turkish drone exports.

Meanwhile, the United States is also preparing to put two more merchant ships and a Russian company associated with the construction of the NordStream-2 project, to its sanctions list.

The US Secretary of State Antony Blinken has announced that these two ships and the Russian Transadria Company, to be placed on the sanctions list for being involved in the NordStream-2 pipeline project.

With the NordStream-2 project, whose total cost is estimated at about 10 billion euros, is planned to carry 55 billion cubic meters of Russian gas to Germany each year, through the Baltic Sea.