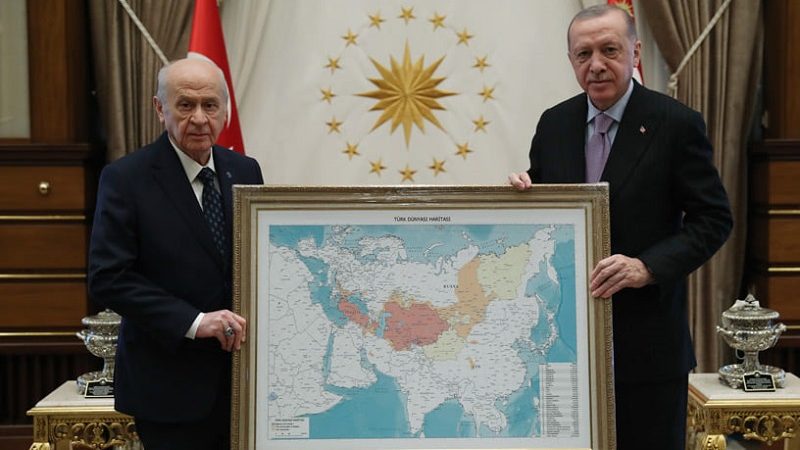 Turkish Party of National Action (MHP) leader Devlet Bahçeli recently presented President Erdoğan a map as a gift. The map was displaying the Turkic speaking world, including territories in Russia and China as well as Central Asia.

The map and its message was widely discussed in Turkish and international media. Even the Spokesman of the Russian Presidency, Dmitry Peskov contributed remarks to the discussion.

United World International presents below the commentary of Andrew Korybko, political anaylst on the discussion. The commentary was first published here.

The Mainstream and Alternative Media recently tried to provoke tensions between Russia and Turkey by manipulatively misportraying a map of the Turkic World that Turkish President Erdogan was photographed receiving from Nationalist Movement Party leader Devlet Bahceli. They claimed that it implied Turkey’s territorial claims to all of the countries and regions highlighted in the map, including several parts of Russia. Ankara has no such claims but hostile media forces have continually attempted to argue otherwise, hoping that their fake news campaign can provoke tensions with Moscow.

These forces are afraid of the game-changing geostrategic consequences of the Russian-Turkish partnership that’s increasingly becoming very strategic in spite of some naturally occurring differences between them from time to time. Presidents Erdogan and Putin have sought to responsibly regulate their competition in third countries, with their noble and politically mature efforts being a success thus far. No sincere well-wisher of either country hopes that they’ll quarrel over fake news like that which was recently spread by the media.

Russian presidential spokesman Dmitry Peskov clarified that his country has no problems with the map that President Erdogan recently received. According to Sputnik, he said that: “Our Turkish partners foster the idea of Turkic unity and it is normal. But I can only regret that the map does not have a big red star marking the centre of the Turkic world. It is located not in Turkey but in Russia, in the Altai, which is a sacred place for any Turk as that is where they originate from. I am saying this is a Turkologist.” This was the wisest response that Russia could have made in reaction to these latest fake news provocations.

Moscow believes in multipolarity and civilizational diversity. Just like Russia has the concept of the Russian World, so too does Turkey have the concept of the Turkic World. These spheres of civilizational influence sometimes overlap like in the case of the map that was presented to President Erdogan. They do not, however, imply territorial claims. Nevertheless, hostile media forces have tried to misportray these concepts. Just like they claim that the Turkic World map hints at separatist plots within Russia, so too do they claim that the Russian World one hints at the same in Eastern Europe and Central Asia.

Peskov’s comments show that the Kremlin doesn’t have any such fears when it comes to the Turkic World’s overlapping sphere of civilizational influence within part of its borders. In fact, Russia seems very proud of the fact that the Turkic people originated in Altai. Instead of becoming the basis for dividing and ruling these Great Powers that nowadays represent civilization-states, this could actually serve to bring them even closer. The conclusion is that the Kremlin will not allow hostile media forces to provoke tensions between Russia and Turkey over fake news connected with the Turkic World’s map.