Tensions between Belarus and Poland 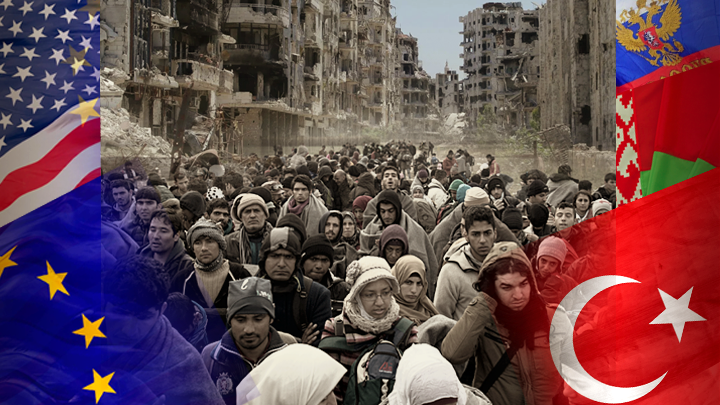 Around 2000 refugees, arriving to Belarus on approved visas mostly from Iraq, are trying to reach Europe crossing the Polish border at the Bruzgi border checkpoint in the Grodno District of Belarus. This issue is currently on the main agenda of both the region and the world. The tensions began when both the Polish government and the European Commission blamed the Belarusian leader Lukashenko for this crisis, which is now heating up more than ever.

The current tensions between Belarus and Poland are actually a mere reflection of the conflict between the Atlantic and Eurasian powers. In fact, when we look at the true reason for this refugee crisis, the sole responsibility for the emergence of such crises lies with the United States and the EU. This is because these Western countries caused this refugee problem in the first place by creating instability, fueling social tensions, and even conducting airstrikes directly over countries such as Syria, Iraq and Afghanistan.

The invasion of Iraq after the September 11 attacks, the provocation of a civil war in Syria, and the support for both separatist and extremist terrorism by the United States, have caused the problem in these regions. They have been trying to undermine the national sovereignty of these countries by installing extremist terror groups like ISIS, and then attempted to legitimize separatist terrorism by creating the perception that separatists were saving the world from this extremist terrorism. In consequence of this imperialist intervention and its effects, the local people in the region left their countries and their homes to seek refuge outside their homelands to save their lives.

Therefore, the United States and the EU are the main causers and the sole perpetrators of this refugee problem. Today, neither the United States nor the EU have taken any responsibility for this refugee crisis in any way. They even dared putting this burden on countries around the crisis zones like Turkey and Belarus. While people are being driven out of their homes in the most inhumane way, their right to asylum is also obstructed in the most inhumane way. Some very drastic measures against these refugees are being taken in Poland and Greece, which the EU considers their eastern border, and we are also seeing these inhumane practices.

‘The main targets here are Russia, Belarus and Turkey’

On the other hand, Russia, Belarus and Turkey are being targeted with the creation of this crisis. These countries are currently seen as the main source of this refugee crisis and their national airlines, including Turkish Airlines, Aeroflot or Belavia are now threatened with sanctions. We can also see the larger Atlantic-Eurasian conflict here. In other words, we see that the reputations of these airlines are also being undermined.

‘Union of Russia and Belarus’

The ‘Union State’ decision between Belarus and Russia was also effective in this regard. These two countries have taken steps to unify, but Belarus has long been a target of the Western camp. Belarusian leader Lukashenko has been targeted with regime change by another colored revolution. This new tactic was launched with this latest refugee crisis when the previous tactics have failed for the West.

The fate and the national interests of Turkey lie with Belarus and Russia. These three countries all face the same problem. Just as Turkey is surrounded by military buildups in the Eastern Mediterranean, the Aegean and Western Thrace, which also President Erdogan has mentioned, likewise Russia and Belarus are tried to be surrounded from the Eastern Mediterranean, Eastern Europe and from the Black Sea. The refugee crisis is another dimension of this military build-up. Just as Greece today blames Turkey for the refugee crisis because of the claimed Atlantic sovereignty in the Aegean and the Mediterranean, Poland also blames Belarus and Russia for the same claimed Atlantic dominance in Eastern Europe and in the Black Sea.

On the other hand, if Turkey is today under a great burden of accepting the refugees and taking on the entire responsibility, so is Belarus. The crisis that ravages the West is being put on countries like Belarus and Turkey.

Turkish Airlines faces a filthy accusation and is now targeted with a campaign of discreditment. But we see that the Turkish Foreign Ministry is stepping back on this issue, instead of taking a clear and decisive stance by rejecting these accusations and protecting Turkish Airlines’ rights under international law. It would be expected that Turkey and the Turkish Airlines take legal steps against this misinformation and smear campaign. And Poland, as a third country, does not have the right to interfere in international flights between Turkey and Belarus. Poland has no say in these legal flights with approved passports and visa documents. There is no human trafficking taking place whatsoever.

Therefore, Turkey’s decision is wrong on this issue, and the restrictions over Syrians and Iraqis for flights from Turkey to Belarus, would simply be the oppression of people’s right to travel. Unfortunately, while Turkey is defending itself on the Eurasian front in the refugee crisis with Greece and the issue of containment, it is making constant mistakes on the Ukrainian and the Polish front. Supporting Poland would be the same as supporting Greece.

Erdogan says that we are being surrounded by the United States in Dedeagac (Alexandroupolis), and criticizes Greece’s inhumane treatment in this refugee crisis. But when the same issue comes to Poland, which serves the same purpose as Greece for that region, Turkey shows its support for it. The United States is also gathering a military buildup in Poland for the Eastern European theatre. Both situations are similar here and Poland is just an outpost for the Atlantic in that region, and it acts accordingly to the interests of the United States. Therefore, Turkey should follow a more consistent policy on that issue as well.