Defeating the pandemic, Cuba opens to tourism – US tries to sabotage with protests 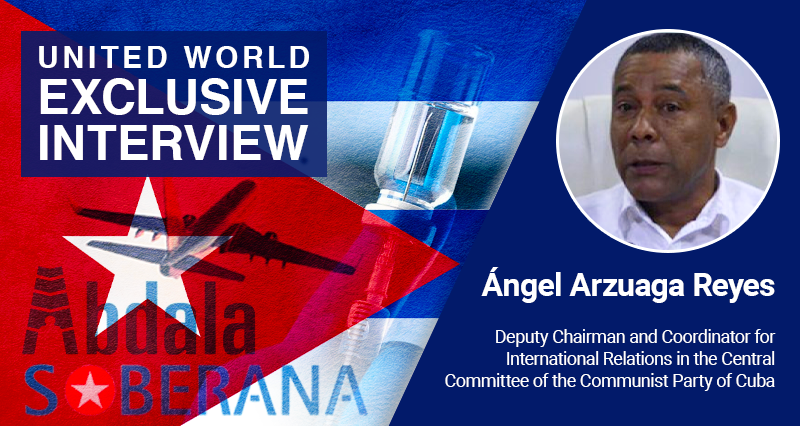 While globally the COVID pandemic continues and only few countries have developed vaccination and the majority of the humanity is depending on so-called vaccine diplomacy to get access to prevention and cure, Cuba, an island of 11 million facing a fierce US blockade, has succeeded in developing its own vaccination.

They are named Soberana 02 and Abdala.

And now, Cuba claims to have achieved victory over the COVID virus. In consequence, the country is opening its borders to international travel and tourism on November 15.

For the very same day, protests against the Cuban government are announced via social media and already supported by the US government by official declaration.

I spoke with Ángel Arzuaga Reyes, Vice Chairman and Coordinator of the International Relations Department of the Central Committee of the Communist Party of Cuba on the country’s struggle against COVID, the recent decision to open borders and the reaction of the US.

How is Cuba’s struggle against the COVID pandemic going on?

Arzuaga Reyes: Thank your first of all for providing the opportunity to describe Cuba’s struggle against COVID-19. There is a reality. We are facing an international and multidimensional crisis, which affects all countries. But it has worse consequences for the developing countries of the Third World. But rich nations are also suffering. Millions have been infected and millions have lost their lives.

Cuba is no exception, we have also been affected by the pandemic. In the first phase of the pandemic, starting in March 2020, we had succeeded in controlling the pandemic. We had only 13 infected persons. And we achieved to maintain this control until December 2020.

In December, with the coming New Year celebrations, lots of Cubans living abroad returned to their homeland, united with their families and were unfortunately not careful despite the different protection measures in force.

And from December till now, we have gone through a pandemic, though the numbers of infected and deceased were lower in global comparison.

The secret for this relative success lies in the measures that were than introduced by the government, the party, the mass organizations and the organized people.

Most importantly, our science sector, which was created from the beginning of the revolution by Fidel, has developed 22 different drugs for both prevention and cure of the COVID. Thanks to these, we are controlling the pandemic today.

This was achieved thanks to the fact that the revolution places the human being, the people’s health and saving lives first, in contrast to the rest of the world where the market comes first.

Additionally, we have already developed three different vaccines, which are in practical use today: Soberana 02, Abdala and Soberana Plus. These vaccines have freed us from a possible dependency from transnational companies in order to immunize our population. These vaccines have shown a great percentage of efficiency, and as of beginning November, we have 90% of the population vaccine.

We succeeded also, and this is crucial, the vaccination of children, so that schools can restart in November. We have therefore organized a national campaign to vaccine children ages 2 to 18.

So, with the range of vaccines, the high percentage of vaccination and the additional drugs we have developed, we are sure to overcome the worst moments of this pandemic.

And you have decided to open Cuba to international travel?

Arzuaga Reyes: Yes, based on the measures of control, the developed vaccines and drugs and the decreasing infection rates, we have decided to open our country to international travel.

From November 15, it will not be necessary to present a PCR test entering Cuba when the visitor presents a vaccination certificate. We will accept all internationally used vaccinations, be it Biontech, Sputnik or Sinovac. Those who are not vaccinated will need to present the PCR test, of course.

This means on that date, we are also opening borders for touristic travels, a sector that is strategic to our economy.

The US State Department announced that protests are going to take place on the very same day, the 15th of November in Cuba. How do you evaluate this?

Arzuaga Reyes: This is not new. This is part of the US policy of aggression against Cuba. The Biden administration maintains the more than 200 measures that Trump had introduced against the Cuban economy, tightening the blockade.

Biden has abandoned all the election campaign promises of cancelling those measures or lifting the blockade, because imperialism has seen an opportunity in the pandemic. They not only kept the blockade, they also started a political and media campaign against Cuba. Their target was to seed hatred among the Cuban population, to provoke domestic violence and provoke instability in the country.

This is part of the US strategy of non-conventional warfare, which is not only applied to Cuba but as well to Venezuela, Nicaragua or several Middle Eastern countries.

And the events of July 11 (date where supposedly Cuban took to the streets protesting, UWI) were no coincidence. But they have seen their failure. The Cuban people have defended their revolution.

To state it clearly: Our constitution clearly says that our Cuban citizens have the right to gather and express their opinions – as long as they don’t violate the constitutional order, which states that socialism in Cuba is irreversible. And as long as they do not put themselves into service of foreign powers.

Has the United States chosen this date on purpose to sabotage the tourism sector of Cuba?

Of course! Of course! They could not win over us. And now, that they see that Cuba is opening up to international tourism, which is an important source of income concerning foreign exchange, in spite of the blockade and the measures of Trump, they want to impede this possibility. This is another attempt of Washington.

But they will not prevail. We have above all the unity of the people. Secondly, our current constitution was discussed at all levels, from the village to the national assembly widely, and it was approved with 89% of votes. And we also know very well who is behind the attempts to plant hatred into our population and to who seeks to create instability in Cuba’s political, economic and social order.

They have not succeeded with prior attempts in the most difficult moments of the revolution in the past, and they will not succeed today.