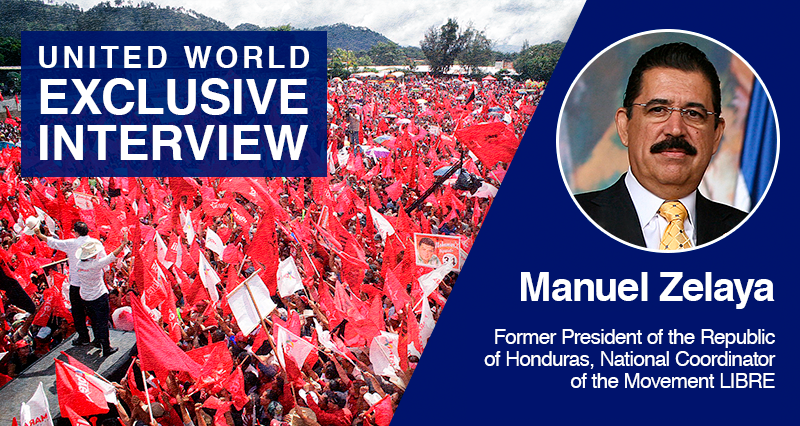 The former President is very busy. He is at the same time on the phone, is directing his assistant and pursuing political debates with activists and even waitresses that enter and leave the restaurant in Mexico City. Maybe this is the reason why José Manuel Zelaya Rosales appears always taller and more energetic than you remember from the last time you met him. On every occasion, he seems to be fighting even more than before.

The German saying concerning soccer, that “after the game is before the (next) game”, is in a sense valid for the President. “After the suffered coup is before the gained government”.

Elected as President of Honduras in 2006, Manuel Zelaya set a different path for the destiny of the Central American nation. He joined the Bolivarian Alliance for the Peoples of our America (ALBA), a regional integration project initiated by Venezuelan Hugo Chavez.

The ALBA membership was followed by Zelaya’s initiative to introduce fundamental changes to the country’s constitution, widely interpreted as an attempt of re-foundation of the country, similar to the Bolivarian constitutional reform in Venezuela.

Honduras’ dominant classes answered in 2009 with a US-supported coup that ousted Zelaya from power and forced him to exile. He returned in 2011 and continued the political struggle, establishing the Liberty and Refoundation (LIBRE) Movement.

November 28, 2021 will be the next round in the political fight, when Honduras holds presidential and parliamentary elections. LIBRE is leading in several polls concerning the presidency with its candidate – Xiomara Castro de Zelaya, the wife of Manuel Zelaya. Xiomara Castro has already been candidate to the vice-presidency in 2017, where LIBRE lost only by a margin of 50.000 votes.

The since then worsened economic situation raises the chances for LIBRE to win the elections – which are not only closely followed Latin America. As Castro has stated that she would “immediately open diplomatic and commercial relations with China” when elected, both authorities from Taiwan and the People’s Republic of China are watching Honduras. The Chinese Global Times cites experts saying that chances are “80-90 percent that Honduras breaks diplomatic ties with Taiwan”.

Always continuing the struggle, Manuel Zelaya is today the Coordinator of LIBRE, a job that got more difficult after other parties of opposition joined to support Castro.

“You learn that tolerance is the main tool in coordinating”, says Zelaya. His ideas on the other hand are quite radical, so he probably will need that merit more in future.

As President, you were targeted by a coup. What was the purpose of that coup?

A coup is organized due to interests. In Honduras, an economic model has been established with the coup, which could not be sustained by democracy. Instead, it relied on electoral fraud, coup d’état and an organized mafia regime.

With this coup, they have gained the opportunity to plunder the country. Today, our foreign debt has increased by 600% in comparison to the pre-coup period. When the organized the coup against me, we had a debt of 3 billion dollars, today we owe more than 16 billion.

In consequence, poverty has increased. The state itself started using violence. There were the so-called death squadrons, ‘groups of cleaning’, assassinations. The government itself shows a lot of aggression against the people. The government has turned into the enemy of the people.

The state, which has been established to solve the contradictions, has turned into an apparatus, which further deepens them, because it has become a defender of the capital, of the property.

Instead of respecting human rights, the government seeks to cover their violations. All this has been the result of the coup d’état.

So today, there is a huge indignation among the population due to the living costs, the energy prices, the transportation costs and the food prices.

In result, Honduras has become a symbol of mass immigration to the United States. Now, the US has great problems with large immigrants groups that depart from Honduras.

Hence, the economic system has collapsed. The neoliberal model provides no answer anymore. It doesn’t provide a perspective for the people anymore.

That leads to change. A pacific, moderate, transformative change. This is the phenomenon occurring right now in Honduras’ coming elections.

Their model has proved to be unsustainable?

Their model was authoritarian, based on force. And this neoliberal model is failing in great parts of the world, not only in Honduras. They are forced to use mass medias and universities to fool the people. They use the church to provide the people with a doctrine, because the model itself does not provide any sense. Hence, they offer the sky, another kingdom, another world.

The economic model has completely failed; it has gone bankrupt.

What is the alternative that your party is proposing?

The alternative is to return to state planning, which had been abandoned to the market forces. The ideology was that the market was blind, that it was going to create wealth. What it did was to accumulate, to concentrate wealth. It did not distribute the income.

The income went to the metropolis, the hegemonic powers of the United States and Europe.

We are now struggling for a pacific, electoral-led transformation that will be followed by a dialogue, and we will establish a government of reconciliation.

Honduras’ elections happen in the context of a revival of CELAC and regional integrations.

Latin America’s destiny is unity. This is not an easy task. To unite Caribenos with Central Americans, Brazilians, Mexicans or groups from Patagonia is not easy. Latin American unity is a challenge.

A new wave of Latin American integration ahead

But we already had strong moments of integration, when ideas to socialize and democratize the economy gained strength on the continent. The 21st Century’s first decade saw the rise of figures such as Correa, Lula, Hugo Chavez, and Christina Kirchner. There, we in Honduras integrated ourselves into that social wave in Latin America. Hence, there are moments when that unity is achieved.

Do we witness another of those moments; is there a new wave?

Yes, there is a new wave currently, this time, more fueled by the dissatisfaction of the neoliberal exploitation model and the capitalist system. There have been widespread protests against this system, for instance since one year in Chile, in Ecuador, even in Argentina against the Macri government, where people took to the streets. Bolsoranaro in Brazil has also been targeted by such protests.

In Bolivia they organized a coup in support of such neoliberal policies, but then, when the ballot boxes were opened, The Movement to Socialism (MAS) returned back to power.

Message to Biden: “no peace as long as the people have no means to survive“

Yes, there is a current wave. And it also targets what I call persistent scandals created by small conservative circles in the United States. 60 years of blockade against Cuba is an example, the US’ intervention into Venezuela and the proclamation of Juan Guiado is another one. The existence of the Group of Lima is another embarrassment, for instance.

And we think that against these embarrassing realities, there is a pacific but important change coming. And in that context my message to the Biden Administration is: To stop the immigration, you have to promote the democracy. In order to avoid the immigration to the US and the widespread corruption, it is necessary to establish governments that are transparent and responsible to the people. We will give the Biden Administration the benefit of doubt, that it will understand that there is no peace as long as the people has no means of survival.

We have to tackle the reasons of the poverty and corruption, and not just use punishment as has been done in the last years.

What is the role that multipolarity can play in the politics of Honduras?

Multipolarity is a phenomenon of the progress of humanity. The rise of China, the return of Russia to international politics, even the European Union with its market share conflicts cannot be neglected. These phenomena are very influential.

The discussion lies in here: you can measure your economy by GDP per capita, but then, you will exclude factors of real poverty, pensions, income distribution, and you will continue the existing model of accumulation.

Hence, we need to develop a new ideology, which in turn will change the economy. Actually, the current failure of capitalism revives and actualizes Karl Marx today for the 21st century.