10 Ambassadors’ statement regarding the Kavala Case; Ratification of the prolongation of military deployment to Iraq and Syria; Bahceli’s statements regarding the role of Greece in hindering Chinese and Russian approaches 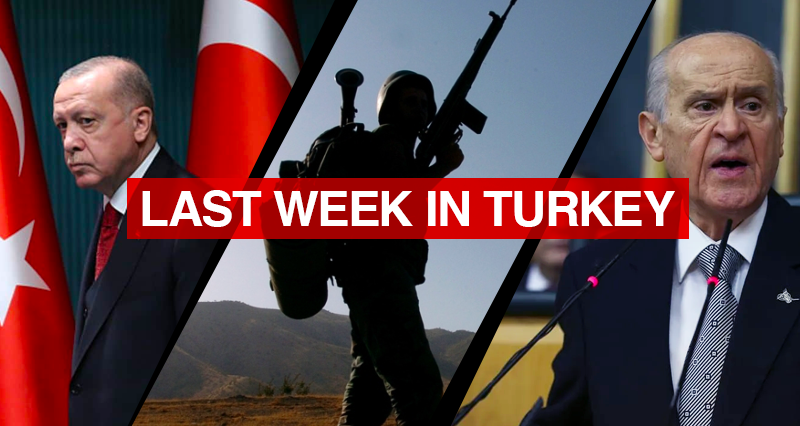 First topic was the official statement by ambassadors of the US, Canada, Finland, Sweden, Denmark, Norway, New Zealand, the Netherlands, Germany, and France regarding the trial of Osman Kavala, a FETO convict, and President Erdogan’s reactions.

Second topic was the prolongation of military deployment to Iraq and Syria being ratified by the Turkish Parliament, and the indications of another military operation against PKK/YPG elements in northern Syria.

Third topic was the MHP leader Devlet Bahceli’s statements regarding the proxy role of Greece on hindering the Russian and Chinese economic initiatives such as the BRI or the Southern Energy Corridor.

10 Ambassadors’ statement regarding the Kavala Case

The Turkish president on Monday reacted against the envoys of 10 countries over their statement on the ongoing trial of businessman Osman Kavala.

Kavala was accused of involvement in the 2016 defeated coup orchestrated by the Fetullah Terrorist Organization (FETO) in Turkey. He was remanded into custody on charges of spying in March.

Last Monday, the US embassy in Ankara published a statement demanding the freedom of Kavala by saying “Together, the embassies of Canada, France, Finland, Denmark, Germany, the Netherlands, New Zealand, Norway, Sweden and the United States of America believe a just and speedy resolution to his case must be in line with Turkey’s international obligations and domestic laws. Noting the rulings of the European Court of Human Rights on the matter, we call for Turkey to secure his urgent release.”

The Turkish Foreign Ministry has summoned the ambassadors of these countries for meddling in Turkish domestic judicial affairs, violating the Article 41 of the Vienna Convention on Diplomatic Relations.

Erdogan said he ordered the foreign minister to declare 10 ambassadors “persona non grata” over their statement on the ongoing case of Kavala.

On Monday, the 10 embassies in Turkey announced that they abide by Article 41, which calls on the envoys not to interfere in the internal affairs of the states they serve in.

The ambassadors who issued the statement on the Kavala case directly target Turkey’s jurisdiction, right of sovereignty, Recep Tayyip Erdogan said following a Cabinet meeting at the Presidential Complex in Ankara.

Turkey cannot tolerate ambassadors questioning its judiciary, while even the country’s legislative and executive organs cannot interfere according to the Turkish Constitution, he noted.

Also, he described the recent move as a great insult to all members of the judiciary in the country, including judges, prosecutors and lawyers.

Although their flag, languages, faces and expressions are different, their purpose is the same; to impede Turkey from becoming great and powerful, he said.

Erdogan added that anyone who does not respect the independence of Turkey and the sensitivities of the Turkish nation couldn’t live in this country, regardless of their title.

“It is the duty of the head of state to give the necessary response to this disrespect towards our judicial members via independent, impartial judiciary,” he noted.

Also, “our intention is never to cause a crisis, but to protect our country’s law, honor, interests, and sovereignty rights,” Erdogan noted.

Those who turn to their old habits, seeing Turkey’s kindness as weakness, will be responded accordingly, as long as they do not admit their wrongdoing, Erdogan also said.

Leader of the Vatan Party, Dogu Perincek has also evaluated the “Persona Non Grata” decision while supporting Erdogan’s decision to expel the ambassadors. He said:

“The violent gang of Biden has started to act in panic. They overtly tied their plans of overthrowing Erdogan to the American strategy. They claim that Turkey is being isolated and hasten their propaganda championing a return to the Atlanticist system. However, there is no turning back from the new path! Because the security and economic stability of Turkey depends from progress on this path. There is no alternative to the new path, as abandoning the path is tantamount to abandoning Turkey.

Now it is Turkey, not the United States, which is on the offensive. Turkey has demonstrated its accumulation and determination to reach historical results in the process of completing the National Democratic Revolution of two centuries.

Turkey’s horizon has been opened. Vatan Party is aware of its responsibilities as the vanguard party of this difficult period.”

Ratification of the prolongation of military deployment to Iraq and Syria

Turkey’s parliament on Tuesday ratified a motion extending authorization to launch cross-border anti-terrorist operations in northern Iraq and Syria for two more years, as well as continued participation in a Lebanon peacekeeping mission.

The Justice and Development (AK) Party, Nationalist Movement Party (MHP), and the opposition Good (IYI) Party backed the Iraq and Syria motion. The main opposition Republican People’s Party (CHP) and the Peoples’ Democratic Party (HDP), however, voted against the motion.

The motion, referred to parliament by the government of President Recep Tayyip Erdogan, allows the Turkish military to carry out cross-border operations in northern Iraq and Syria for two more years, from October 30th 2021, until October 30th 2023.

The motion stated that the risks and threats posed by ongoing conflicts near Turkey’s southern land borders “continue to rise.”

“On the other hand, the continued existence of PKK and ISIL elements in Iraq and the attempts against ethnic-based separatism pose a direct threat to regional peace, stability and the security of our country. Terrorist organizations, especially PKK/PYD-YPG and ISIL, continue their presence in Syria in the areas adjacent to our border, continuing their actions against our country, our national security and civilians,” it said.

The motion also decried the violent attacks of the terrorist PKK/YPG in Syria, adding that Turkey has taken necessary measures in line with its “legitimate national security interests” to preserve the “peace and stability established in Turkey’s operation areas.”

It also pointed to the situation in Syria’s Idlib province, the country’s last remaining opposition stronghold, saying that the peace and stability established via the Astana process continues to be under threat.

PKK terrorists often use northern Iraq, just across the Turkish border, to plot attacks in Turkey. Turkey says it uses its rights under international law to pursue these terrorists at their hideouts.

Daesh/ISIS terrorists have carried out multiple attacks against Turkey, including at least 10 suicide bombings, seven bombings, and four armed attacks, which killed 315 people and injured hundreds of others.

In response, Turkey launched military and police operations at home and abroad to prevent further attacks.

Since 2016, several Turkish cross-border operations in northwestern Syria have liberated the region from YPG/PKK and Daesh/ISIS terrorists, making it possible for Syrians who fled the violence to return home.

Turkish lawmakers also ratified a separate motion to extend for another year the deployment of troops in Lebanon as part of a UN peacekeeping force. The AK Party, CHP, MHP, and IYI Party backed the motion, leaving the HDP as the sole party opposing it.

Under the motion, the term of Turkish soldiers in the UN Interim Force in Lebanon, also known as UNIFIL, is extended until October 30th 2022. The motion has been extended 14 times since it was first approved by parliament in 2006.

Nationalist Movement Party (MHP) Leader Devlet Bahceli has recently given some statements on foreign policies at his party’s parliamentary group meeting. Regarding the US military pile-up along the border with Greece, Devlet Bahceli said, “The United States has promoted Greece as one of its outposts that will cut out Chinese Belt-Road initiative or the Russian Energy Corridors.”

Reminding that Greece signed a “Strategic Partnership Agreement for Joint Defense and Security” with France on September 28th 2021, Bahceli asked, “How is this agreement, not a move against the true nature, principles and the alliance culture of NATO?”

Emphasizing that this is an insidious and secretive agreement, Devlet Bahçeli said, “I am letting myself to be clear: traps are being put against Turkey within NATO, and deep sea mines are being laid in the Aegean and Eastern Mediterranean against Turkey. They try do demoralize and threaten Turkey. The United States and France, which are in a dispute in the Pacific, are somewhat pointing their guns all of a sudden, together at our country by taking Greece on the forefront in the Aegean and Mediterranean.”

Reminding that the US Secretary of State’s description of Greece as “a pillar of stability in the region”, Bahceli continued:

“This minister has either lost the sense of reality entirely, or he has a neurosis. Greece is not the pillar of stability, but of instability, expansionist ambitions, politics of crisis and the side that should be corrected in all these disputes. No one should even dare trying to fool us, we all know and see all the shadow puppet of the United States, Greece and other opposition forces and say ‘give us all you got’.

When we look at the Greco-French and Greco-American defense and military agreements, it will be understood that the Athens administration will follow policies that are further riveted with hostility in the Aegean and Mediterranean through its airspace and maritime areas against Turkey.

The United States has promoted Greece as one of its outposts that will cut out Chinese Belt-Road initiative or the Russian Energy Corridors, and made a military stockpiling in this country and aimed to keep Turkey contained. This is a geopolitical gamble. Greece seeks to militarize and put its foreign policy on an aggressive state as being an outpost, and by coming up with fabricated threats as an excuse.

Disturbing moves along our southern borders were also resonated through the Aegean and Mediterranean. The United States is seen in every network of relations that are against any friendships or alliances. This country, while provoking Greece against Turkey, is also simultaneously arming the PKK/YPG/PYD, which directly targets Turkey. The northern territories of Iraq and Syria must be totally cleared or terrorism and the attacks must stop, now more than ever.