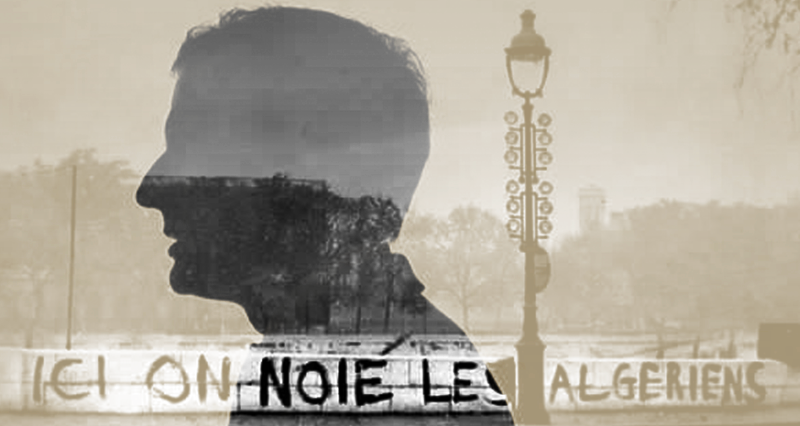 On October 17th 1961, more than 300 Algerians were murdered on the streets of the “world capital of culture” Paris, during a protest against the French occupation of Algeria.

On that night, more than dozens of Algerians were thrown into the cold waters of the Seine River over the Saint Michel Bridge, a touristic landmark for couples today, with their hands and feet tied on their backs. Most of the bodies of these Algerians were never found.

Even today, if you look carefully at the furbished walls of the bridge, you may still notice the marks left by the graffiti from October 1961, which reads “Here we drown Algerians”, written in white paint.

Water went under the bridge since then, and more than half a century has passed since the African struggle for independence succeeded. But the arrogant French imperialism has not changed its humiliating views towards Africa and its peoples.

Most recently, as the French President Emmanuel Macron’s almost blasphemous statements against the Algerian history showed, France still sees all of its former rights over Africa in full force.

What President Macron does not understand or even want to understand: the times have changed and now the African peoples have the right to choose their own destinies under sovereign states, both in their domestic and in foreign policies.

After gaining its independence in 1962, Algeria has pursued a foreign policy in North Africa that refuses to be under the mandate of France or any other imperialist power. The country pursued policies that sought to expand its international alliance potentials.

Algeria has paid the price for this action, with a civil war where the French intelligence agencies played a critical role, and with the loss of tens of thousands of lives – a war that plunged the whole nation into darkness for many years.

Although Algeria managed to partly recover from the civil war, it continued to be stuck in the mistakes of the ruling elite, which was stuck in too much bureaucracy and had lost its revolutionary characteristics at some points.

The political refreshment came in April 2019 when Abdelaziz Bouteflika, who had been ruling the country for nearly 20 years, has resigned after violent protests, and the country went through a new path with an “old core”.

As it had taken a pro-Soviet stance in the past, accordingly, Algeria today has developed strong relations with the rising powers of Asia, such as China, Russia and Turkey, and has taken an anti-imperialist stance in the disputes in the Arab world, as for instance during the Syrian civil war.

Of course, despite these efforts, France still remains as the second largest import partner of Algeria after China, and also the fourth largest export partner for the Algerian gas and oil resources.

In addition to these trade relations between the two countries, let us also mention that there are more than 2 million Algerians or Algerian-French citizens living in France.

But despite all these ongoing ties, France still continues to lose in Algeria.

The geopolitical course and the winners In Algeria

The rise of China, Russia’s return to the international arena and Turkey’s active policies in the Islamic World, and particularly in North Africa, have surely influenced the Algerian political course.

Today in Algeria, where France has been losing, China, Russia and Turkey come out as the winners.

In addition to being Algeria’s number one import partner, China is also involved in many strategic projects in the fields of oil, gas and solar energy industries. It was Chinese state-owned companies that accomplished the construction of the Great Mosque of Algiers the largest mosque in Africa.

On the other hand, the relations between Algeria and Russia have revived to a point that is reminiscent to the Soviet era.

It is well known that Russia, which wishes to play an active role in Africa, deems great importance to its relations with Algeria.

As the relations between the two countries have developed, especially in terms of defense industries, some recent reports of a deal on nuclear energy were also resonated in the media.

Another rising power of Asia, Turkey is also following a course that deepens its relations with Algeria.

There are also reports of an implicit agreement between Turkey and Algeria, on the Libyan issue, in the area of military cooperation.

Taken into account all these realities, the French President Emmanuel Macron’s statements that target the Turkish-Algerian relations through the Ottoman era, become much easier to understand.

The alliance that will end the French influence in Africa

China, Russia and Turkey are all trying to improve their relations with Algeria and other African countries, using different approach methods.

The colonialist forces of the continent and the United States on the other hand, are using their entire efforts to limit these countries’ space of maneuver.

As there are many similarities between the methods of approaching African countries between Beijing, Moscow and Ankara, there are also many differences. The most prominent similarity is that these countries, unlike the westerners, have an approach towards these nations under an equal win-win model.

Of course, this model is still very young and open for improvement. At this point, it is clear that the projects that can be developed in Algeria, one of the largest countries in Africa, under a Turkish-Russian-Chinese partnership, will also set an example for other countries in Africa.

Such an alliance, which will act on a win-win relationship with the African nations, would surely restrict the field of movement for the Western countries, and especially France, which continues to oppress the continent by creating turmoil.

The multipolar world, new alliances, new models of cooperation and new political approaches are being born in the continent of Africa, too.

As we stated at the beginning of this article, water has passed under the bridge…