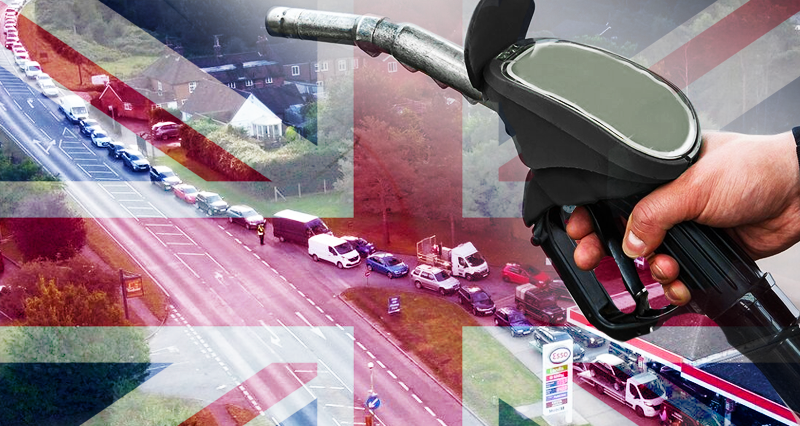 “Why is the newest Bond movie ‘No Time to Die’ considered the least realistic in the series’ history? Because it shows a Brit in a fully fueled car.”

This is just one of a multitude of jokes typical of those facing the current crisis. The problem is absolutely real in this case, and cannot be explained only by the hysteria of buyers or the conspiracy of fuel suppliers. The United Kingdom has temporarily been struck not by a shortage of goods – but rather, by a very hungry labour market.

Another anecdotal illustration of the current phenomenon is the meme in which Elizabeth II answers Boris Johnson’s call saying, “Yes, I was a truck driver during the war, why do you ask?” Already in the Summer, the transport industry warned that there was a shortage of at least 25,000 qualified HGV drivers. It was then that severe supply shortages in stores became noticeable – not because of the lack of goods, but rather because of a lack of employees who could deliver them. Since then, these numbers have soared: there is already a shortage of 90,000, and at the conference of the opposition Labour Party its leader Keir Starmer mentioned being short around 100,000 drivers. But the point is not even in exact numbers – it is an indisputable fact that petrol stations have long queues unseen since the 1973 oil crisis. Try to imagine that dissonance of seeing signs that read “No petrol” in Aberdeen, the North Sea capital of BP and the British oil sector.

…but at least we lowered our carbon footprint!

For a person like myself who was raised under socialism, this brings back memories of childhood, miles long queues of archaic cars, waiting for hours for petrol deliveries… And just like at the beginning of the 1980s, our attention is drawn to diesel cars (imported from the West) serenely passing gloomy petrol car drivers with no obstacles to the gas tank, refuelling however much can fit. As a sworn diesel user, I now for a moment felt the same satisfaction when my car, doomed to inevitable destruction in the next decade – may once again prove its advantage over grounded petrol competitors.

But in the present situation, does it not sound suspiciously like another joke that the UK has taken the lead in the fight against the carbon footprint because it promised to eliminate petrol and diesel engines by 2030, while most of them have not been running since last Wednesday?

This is a puzzling coincidence: here, after several months of lockdowns and travel restrictions, when, especially in the hardest months, British roads were almost completely empty – during the holiday season, the inhabitants of the Islands, effectively discouraged from traveling abroad, massively returned to domestic resorts on camping trips. The roads were crowded again – but COVID has already proved that we are able and even obliged to sit at home instead of driving around to the detriment of our health and the Earth! So, even before restrictions return later this Fall – we have been stopped in a different way.

UK – a lot of jobs, but the candidates are still abroad…

COVID had a significant impact on the current issues– more precisely – a mix of COVID and BREXIT did, but in a completely different way than the opponents of the latter are trying to convince us of. It is not true, after all, that BREXIT closed British borders to European goods and hence the shortages. Exactly the opposite – already at the beginning of this year, it was the EU, especially France, that closed the borders to goods from the UK, which should legally be admitted. This practice particularly affected fish and seafood from Scotland, and the pretext was, of course, COVID and the treatment of the new / old type of customs entry documents with meticulousness exceeding the Italian strike. As we remember, as a result, B. Johnson’s Government surrendered (or just admit that this part of BREXIT propaganda was just a lie from the very beginning) – and retained the privileges of European food imports on the British market. No, there could be no shortage of Spanish cherries – but there were no drivers and store assistants who were willing to work in Tesco, ASDA and other supermarkets and do delivery, unloading and lining goods.

However, even before the pledge to defend the domestic market was not kept, from January 1, 2021 another promise (without which BREXIT would probably not have been voted for) – began to be fulfilled. The UK has been closed to guest workers. Anyone who has not received or at least applied in time (i.e. before June 20, 2021) for settlement or pre-settlement status in the UK – cannot be employed. The closed list of specialists rigorously required worker visas and created practical difficulties for employers interested in importing personnel from outside the Islands. In a few months, this paralysed the market, especially the very bottom of trade and services. First, there was a shortage of people willing to work for the minimum wage (especially in supermarkets, cleaning and delivery) as that had been how the newcomers usually started – and now they do not come. On the other hand, the British benefit system, which a few years ago left some space for earning extra money on small contracts – was reformed so that it is not profitable for those receiving benefits to additionally work and they are pushed to choose. Those remaining solely on Universal Credit were supposed to free up jobs for new entrants, students and so on – or to relieve the social welfare system. As it is easy to guess – most people chose to continue their life on benefits, and vacancies for sellers, warehouse workers, cleaners remain empty. Those who are still working one by one returned to furlough (a special COVID payment for work abstained) when it was still paid, or are pushed to quarantine every time someone at their workplace tests positively.

Thus, COVID and BREXIT together paralysed Britain’s economic daily life, making it a wee more burdensome without compromising in the slightest degree the complacency and profits of the elite.

Hold out the Brexiters and promote electrics?

What now draws attention is the apparent carelessness with which both the rulers and the financial spheres approach the fact that the economy we were used to in practice has not been functioning for several months. Moreover, everything, even quite obvious gaps and mistakes seem to be the present implementation of previously adopted plans, the motivations and goals of which are still impossible to guess. So, are we – according to some – actually dealing with the continuation of the greatest action in history promoting passivity and immobilization of a large European state?

After all, reports from queues at petrol stations – are accompanied by subliminal stories about the lucky ones who bought electric cars in time (with Government help of course) and now drive them up to 200 miles without recharging! Or maybe they are right who argue that it is high time to roll up the now unnecessary anti-immigration banner of BREXIT and after a few more weeks of training the Brits will open the border again? Let’s be serious, a few more weeks without fuel, with no mineral water, pasta and toilet paper in supermarkets, with disgusting dirty toilets – and even the staunchest enemies of immigration will rush across the Canal as their grandfathers to Dunkirk, to beg people willing to work to return to the UK!

Regardless of whether and which of these versions comes to pass (maybe all of them?) – one thing is certain: someone is playing the British again.