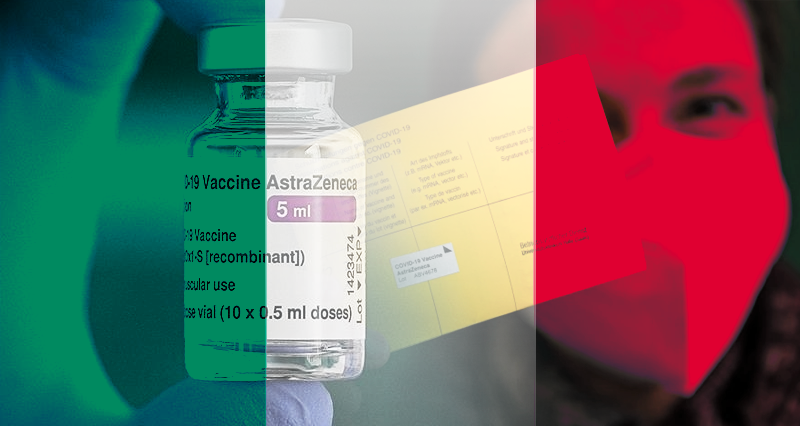 The road to compulsory vaccination

The debate over the possibility of an obligatory vaccination against the coronavirus in Italy is becoming increasingly heated. During a press conference on September 2, Prime Minister Mario Draghi was asked whether, once the EMA (European Medicines Agency) and AIFA (Italian Medicine Agency) have given full authorization for the use of vaccines against Covid, the Prime Minister believes that the vaccination requirement can be introduced, and of the possibility of a third dose. The premier replied “Yes to both questions”.

The target of 80% of immunized people over 12 is now very close and, according to Draghi, it will be reached at the end of September. However, the Delta variant, being 50% more contagious, has changed things as well: the vaccine shield works, but it does not completely stop the infection. In fact, the Ministry of Health is hoping for a threshold of at least 90% of immunized people over 12, a number deemed sufficient to be able to manage the epidemic.

The Green pass in Italy

As of August 6, the Green pass (a paper document or app that proves the holder has been fully vaccinated or recovered from COVID), formerly called “vaccination passport”, is mandatory in Italy for many activities. Moreover, from September 1, the Green pass is also necessary to access transport, universities and schools and from October 15 to enter any workplace. If the target of 90% vaccinated people is not reached by the end of October, then it will be possible to resort to the vaccination obligation mentioned by Draghi.

The administration of the covid-19 vaccine to the entire adult population is mandatory only in a few states: Turkmenistan, Tajikistan, Indonesia and Micronesia. In other countries there are only measures limited to certain categories.

The position of political parties

After the premier’s announcement, tension rose among the forces of the majority who support the Draghi government on the extension of the green pass and on the vaccination obligation. The Lega Nord (North League), which is part of the government, immediately made it known that “More than 38 million Italians have already freely chosen and completed the vaccination cycle, more than 70% of the population over 12 years of age, in addition to 5 million recovered citizens. The Lega was and remains against obligations, fines and discrimination, remembering that in no European country there is an obligation to vaccinate the population”.

But Salvini’s problems did not end there. Even the important names such as the head of delegation Giorgetti and the governors Fedriga, Zaia, Fontana have declared themselves in favor of the extension of the health pass that already outlines the final position of the party. Matteo Salvini is increasingly isolated and in the face of the positions taken by the big names in his party, and it seems he is no longer to carry on a hard line that has seen him close to the demands of those opposed to the green pass.

The other force of the majority, the Partito Democratico (Democratic Party), was initially uncertain about the obligation, but after Draghi’s press conference, the secretary of the party Enrico Letta declared that they will be in favor of compulsory vaccination: “I very much agree with the line that Draghi is pursuing, which is a safety line, which is the condition for freedom”.

Letta also invited the forces of the majority to clarify their true position: “For us, extending the vaccination obligation and the Green pass is the essential condition to be able to move forward. This is why in the government majority who is against the Green pass is against freedom and against security”.

The position of the Movimento Cinque Stelle (Five Star Movement) is less defined, as they risk splitting on the vaccination obligation. The leader of the Movement, the former Prime Minister Giuseppe Conte reiterated the non-necessity of the measure: “I don’t support mandatory vaccination. I believe that the responsibility of the Italians has been there. I have always appealed to responsibility”.

The Deputy Minister of Health, Pierpaolo Sileri of Movimento Cinque Stelle, seems instead in favor of the possibility of introducing the obligation, which may be necessary in the event of failure to achieve herd immunity: “Hospitalizations for Covid are almost exclusively linked to the unvaccinated and if 80% of vaccination coverage is not reached at the beginning of autumn, it will be necessary to evaluate the obligation”, he said. “In the meantime, it will be necessary to convince all these millions of people to get vaccinated and it will take an enormous effort because the no vax, idiots, have done enormous damage, spreading lies”.

Ex-premier Matteo Renzi, leader of Italia Viva (Italy Alive) and staunch supporter of mandatory vaccination, said: “The no vax climate of these days, arises from years in which politics has succumbed to these movements. How can we counter extremists? With an iron fist. I hope that the vaccination obligation will be implemented”.

Forza Italia (Forward Italy), as Renzi, supports the Draghi government on the issue: “If herd immunity is not achieved by the first week of October, we believe it will be necessary to introduce vaccination obligations for the entire population”.

The executives, ministers, deputies and governors of Forza Italia affirm this in a note. Even if there are those who remain skeptical like the Forza Italia deputy Andrea Ruggeri: “I am a fervent pro vax, but I remain opposed to the vaccination obligation, as every liberal should be, like President Berlusconi beautifully specifies in Il Giornale: convince, not command”.

Enthusiastic words on the other hand for the announcement of Draghi by Giovanni Toti, founder of Coraggio Italia (Courage Italy): “Hearing President Draghi so hard against the no vax and so favorable on the vaccination obligation and the third dose shows that the ideas are clear, that the state exists. And that’s what the citizens want”.

Fratelli D’Italia (Brothers of Italy) remains united in opposition to the vaccine obligation. The party, according to the latest polls, is at 20%, surpassing Salvini’s Lega. Its leader, Giorgia Meloni, criticizes the premier’s announcement on Facebook: “Surreal press conference by Draghi and Government. He announces the will to extend the Green pass, despite being a useless measure to fight the contagion, and he says yes to the introduction of the vaccination obligation. We are increasingly convinced of remaining in opposition to this government. If the government wants to use the green pass to surreptitiously introduce a vaccination obligation, I disagree. The vaccination obligation is not fair and I disagree”.

Lavinia Del Corona, constitutionalist and member of the Council of Bioethics Association, explains that the right to health allows you to refuse medical treatment but “this right is not unlimited. Limitations may be introduced as long as they are a protection not only for the health of the single individual, but are necessary to protect the right to health of all other people”.

The current Green pass is required to access restaurants, clubs (indoor), sport and cultural events, swimming pools, gyms, facilities where team sports are held indoors; it is also used to travel on long-distance trains and buses, ships and airplanes.

Starting on October 15, the use of the Green Pass will be made mandatory for all workers, without any kind of distinction between the public and private sectors. A person without a pass or anyone who refuses to show it will be considered absent without pay. After the fifth day the suspension will start, but not the dismissal. For those who are caught in the absence of certification in the workplace, a pecuniary sanction is foreseen from 600 to 1500 euros. The Decree Law which provided for the extension of the obligation was unanimously approved by the Council of Ministers on September 16, 2021.

In Italy, the vaccination obligation has already been in force since April 1, 2021 for doctors, nurses and all health personnel. The certificate of immunity by now is not only used to participate in social life or in the educational system but it becomes indispensable to work.

With the expansion of the use of the green pass, “Italy will be the only country in Europe and in the entire Western world to introduce a vaccination obligation, albeit surreptitious, extended to almost the entire population”, says Francesca Donato, Lega’s member of the European Parliament.

Opponents argue that the Government wants to use the green pass to surreptitiously insert a vaccination obligation.

The Green pass is actually not a vaccination obligation because the certificate can also be obtained by proving that you have tested negative in the previous 48 hours. The Deputy Minister of Health Pierpaolo Sileri reiterated the difference between extending the Green pass and mandatory vaccination: “The Green pass is not an indirect obligation to vaccinate, but a tool that gives you the freedom not to get vaccinated” he said, since certification can also be obtained with tests (molecular, rapid and salivary).

But here another problem arises as constitutionalist Michele Ainis rightly notes in the Republica: “You can get it even without vaccinating, if you undergo the torture of a test every two days. In addition to the matter of physical discomfort and the inconvenience of frequently resorting to tests. Otherwise your torture will consist in deprivation”.

The controlled prices introduced by the government for the tests are 8 euros for minors and 15 for adults. Not many people can get tested continuously at these prices.

The historian and university professor Alessandro Barbero observes: “It is one thing to say ‘Gentlemen, we have decided that the vaccination is mandatory because it is necessary and consequently we are now introducing the obligation’, I would have nothing to say about this. Another thing, however, is to say ‘no, there is no obligation, for heaven’s sake … you simply can’t live anymore, you can’t take trains anymore, you can’t go to university anymore. However” – he underlines with irony – “there is absolutely no obligation … and the green pass is for this, not to induce people to get vaccinated by subterfuge”.

Despite the criticism and opposition, Draghi’s government is moving forward with the support of those who do not question its agenda. The mandatory syringe is metaphorically and politically already loaded.