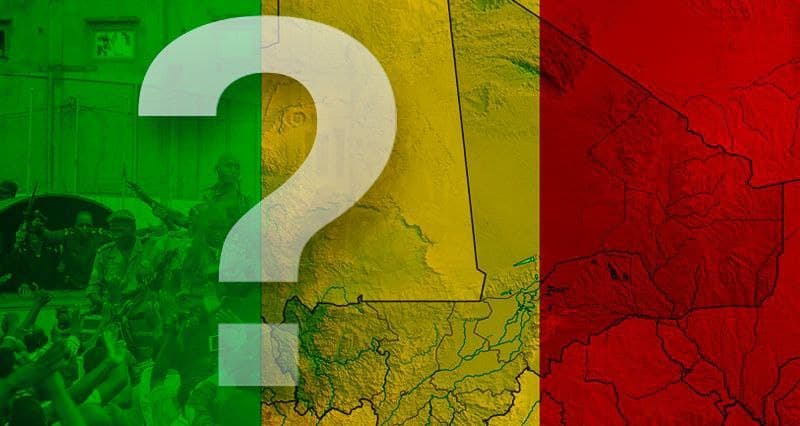 A security crisis is unfolding in Mali, one of France’s former colonies in Africa. According to Anadolu news agency, five Malian soldiers were killed Sunday in an ambush by terrorists against a Malian army patrol at Manidjè in the commune of Kolongo (Macina Circle), in the center of the country.

Ambushes and attacks with explosive devices happen all the time in the country, especially in the Segou and Mopti regions in central Mali. On Saturday, the UN Mission in Mali (MINUSMA) reported that three peacekeepers were wounded in the Kidal area in the northeast of the country.

Also, two Moroccan drivers were killed and another wounded in an armed attack in Didiéni in the Kayes region of the south on Saturday.

France: defeat in the Sahel

The situation in Mali, a rather poor but previously relatively calm African state, escalated in 2012 with the rise of the Tuareg separatist movement in the north of the country. An indirect cause of the Tuareg’s rise was the overthrow of Muammar Gaddafi in Libya in 2011, to which NATO countries, primarily France, contributed. Gaddafi relied on Tuareg militias, who were loyal to him until the end. Tuaregs living across the Sahel were given asylum in Libya, although without receiving citizenship. After the overthrow of Gaddafi, the Tuaregs, who had lost support and had first-rate training, became enemies of the new masters of the country. So a large part of them moved to neighboring countries, especially Mali, where in the north lived the same Tuaregs. It is also important to note that the Tuaregs from Mali and Niger served in Qaddafi’s army. There, the Tuaregs gained the support of the local Islamists and together, they took over vast desert areas in northern Mali.

The central government in Bamako turned to European ally France for help. Paris deployed troops under the Operation Serval (2013-2014) in Mali, which has been replaced since the summer of 2014 by the larger Operation Barkhan. The operation is conducted in Mali, Chad, Burkina Faso, Mauritania and Niger. However, its results are deplorable. Terrorist groups have not disappeared, but are still active. In February 2020, the pro-French President Ibrahim Boubacar Keita tried to start a negotiation process with the leader of the leading jihadist group in the region, Jama’at Nusrat al-Islam wa’l-Muslimin (JNIM), an alliance of Ansar al-Din, al-Mourabitoun, the Macina Liberation Front, and the Saharan branch of al-Qaeda in the Islamic Maghreb (AQI). However, negotiations went nowhere.

Under the pretext of combating terrorism, the French established an alliance with the separatist groups, the Coordination of Azawad Movements (CMA): Arab and Tuareg separatists operating in the north of the country. In 2015, the French imposed peace agreements on the Malian government, which de facto asserted the separatists’ authority in the northern regions of the country under the supervision of Paris. Now, the CMA is pushing for an expanded regionalization of Mali and the consolidation of power in the north in its own hands, including the legalization of its military contingents.

At the same time, international observers note that agreements in the parts that deal with the disarmament of separatists and their de-radicalization are not respected.

At the same time, after the entry of French troops, terrorism has only begun to spread across Mali. Apart from the north, terrorists have appeared in the central regions, where the Macina Liberation Front, backed by the Fulani (Fulbe) people, has asserted itself. They are fighting to recreate the Islamic State of the Fulani.

While in 2018 64% of all terrorist attacks in the Sahel occurred in Mali, the Macina Liberation Front was linked to 63 percent of all violent events in central Mali and a third of violent events in the whole of Mali.

The French in Mali have made many mistakes and committed many crimes, with no mercy to civilians or their allies. In September 2020, a French soldier in Gao killed a civilian, and in 2017 11 Malian soldiers died in a French operation to free them. In January 2021, French troops carried out an airstrike on a group of civilians in Mali. Nineteen people were killed, according to a UN report.

At the same time, the French began to further destabilize the situation they had themselves created before with the division of power in northern Mali between the separatists and government troops. They arrested one of the leaders of the CMA.

These actions took place against the background of reports about the impending withdrawal of French troops from Mali. One got the impression that Paris was seeking to leave to its successors the possibly most complicated situation on the ground behind.

In early June 2021, French President Emmanuel Macron announced that French troops of about 5,000 would gradually withdraw and that France would close its military bases in the Sahel region.

“This is defeat, that’s clear,” Thierry Vircoulon, an expert on Africa at the French Institute for International Relations, commented on Paris’ actions.

“Mali since January 2012 is a stateless country that rules, protects or represses. The regions of the north, center and part of the south are occupied directly by the Salafist groups who dictate their law. The French, Malian and international forces (MINUSMA, G5 Sahel) are, despite their number and their firepower, still unable to restore security. You have to wonder what the real plan of their sponsors is,” Mohamed Ag Akeratane, Secretary General of the SADI Party of Mali told the UWI-sponsored New International Order (NINTO) conference.

The French “anti-terrorist operation” has turned Mali into a region where the state has ceased to function and – according to locals – there are “already towns in close proximity to Bamako that are insecure”.

As a result, in 2020, the Malian military overthrew pro-French President Ibrahim Boubacar Keita amid popular protests. Young colonels preoccupied with preserving the state came to power. However, there are obvious difficulties along the way. First of all, there is the difficulty to overcome the French colonial legacy.

Mohamed Ag Akeratane notes that the coup was in fact “an insurgency that put an end to the regime of the neoliberal president”. The authorities of Mali now face the difficult task of normalizing the situation in the country, overcoming inter-ethnic conflicts and eliminating the terrorist underground.

In recent months, the African media reported about the emergence of the Dyck Advisory Group (DAG) in Mali – a South African PMC that previously unsuccessfully had tried to fight ISIS terrorists in Mozambique. There was also information that the Malian authorities have turned to the Russians. In the country there is already a Russian PMC, the RSB-Group, which is allegedly a cover for the more famous Wagner Group. Reuters also reports that this PMC and the Government of Mali are ready to sign an agreement.

The latter has quite a good reputation in the Central African Republic. There are unconfirmed rumors that some Cheka fighters from the CAR may appear in Mali.

Other players are logically filling the power vacuum left by the retreating French. So far, it seems that Russia is the key partner that the Malian authorities are willing to work with. In that choice, the new authorities in Mali are relying on a broad public support; there have been numerous rallies in the country in support of closer relations with Russia. Locals in Mali, and indeed throughout Africa, perceive Moscow as an ally in the struggle for liberation from French domination.

The factor of Turkey

Anti-French sentiment is active throughout Africa. Since 2019, some anti-French demonstrations have been taking place in Sahelian countries such as Senegal, Mauritania, Mali, Burkina Faso, Niger, Nigeria, Chad, as well as in Sudan and Eritrea. Paris is accused of preventing former colonies from developing, controlling their financial systems (CFA Franc), supporting corrupt elites, imposing unequal economic relations and directly interfering in politics.

However, it is not only Russia that African peoples see as an alternative partner. They also hold out hope for Turkey.

An annual Africaleads poll confirms that French confidence in African countries is on the decline in 2021. Turkey’s rating, on the other hand, is rising.

Turkey is also actively turning towards Africa, developing economic, cultural and security cooperation with African countries. Turkish President Recep Tayyip Erdoğan has become the absolute record holder among non-African leaders in terms of visits to the continent. The emphasis is on sub-Saharan Africa.

In Mali in August 2020, after a coup that toppled President Ibrahim Boubacar Keita, Turkish Foreign Minister Mevlut Cavusoglu was the first high-ranking foreign official to meet with the military.

Where terrorists use ignorance and social problems to undermine the country’s stability, Turkey can offer Mali an effective model of economic cooperation, working with local people, building vital infrastructure and providing education. Ankara is a leader in social projects in the Islamic world, as evidenced by the success of TIKA. Turkey through the Turkish Cooperation and Coordination Agency (TIKA) has become one of Africa’s largest development partners.

In July 2020, with the signature of a bilateral defense agreement between Niger and Turkey, Turkey’s cooperation with the Sahel countries, especially in the fight against terrorism, has reached a new level. On September 5, 2021, President Recep Tayyip Erdoğan held talks with Mali’s military leader Assimi Goïta. The Turkish leader stressed that his country is ready to strengthen economic and trade relations with Mali and develop cooperation, especially in the military and defense industry. Erdoğan said they are ready to share their experience in the fight against terrorism with their friend and brother Mali.

Thus, in Mali, the interests of Turkey, France and Russia overlap.

Don’t fall into the trap

Françafrique countries are withdrawing from French influence. According to French President Emmanuel Macron, not only Moscow and Ankara, but also China, the global economic giant, plays an increasingly important role in Africa. Nevertheless, it is premature to talk about the end of French influence in Africa. France is linked to Africa by thousands of threads of economic, political and personal ties. The institutions of French influence are strong.

And they will use all means to preserve it: by projecting chaos, as was the case in CAR with François Bozizé’s attempt to overthrow the legitimate authorities and disrupt democratic elections late last year or by pitting opponents against each other.

With both the Russians and the Turks having interests in, Mali could become a field for this clash. Or, Ankara and Moscow will realize that they (as well as China) are interested in one thing: overcoming the French colonial legacy and American unipolar hegemony (of which Paris is a subcontractor) in Africa. In this case, together, they can overcome the intrigues of Paris and help African countries free themselves from neocolonial oppression. However, this requires wisdom on both sides, a willingness to compromise and to agree on actions.