Mali torn between the occupations 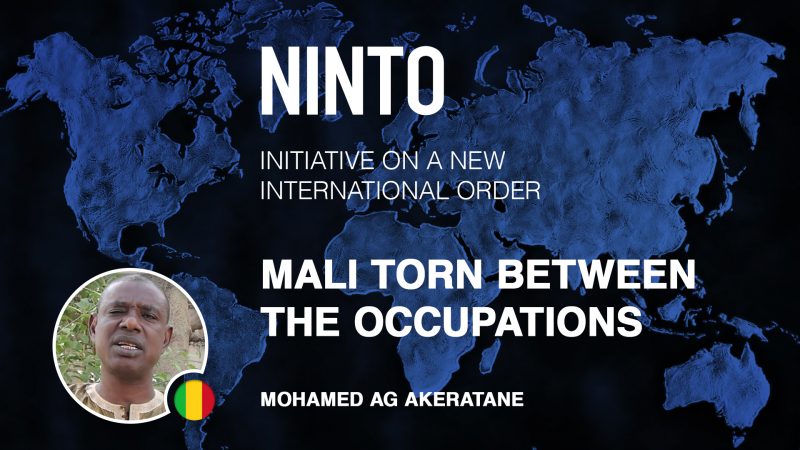 Today, UWI presents the speech of Mohamed Ag Akeratane, Secretary General of the SADI Party. Subheadings were set by UWI.

Mali torn between the occupations

Your Excellency President of the Symposium,

Dear comrades in the struggle,

Thank you for this opportunity that you are giving us to exchange ideas, discuss and open up perspectives and, I hope, will develop new forms of solidarity.

I send you the greetings of the Political Bureau and all the members of the African Solidarity Party for Democracy and Independence (SADI).

This party created in 2001 is a revolutionary, progressist and pan-Africanist party.

The neoliberal international order is indeed designed to support and consolidate the crumbling capitalist hegemony face of popular resistance. The struggling peoples no longer want it and the system can no longer! It is therefore necessary to put it on the ground.

Africa and the Sahel, you know, are teeming with immense untapped natural resources that rekindle the appetite of the multinationals who run the neoliberal system based on the exploitation of peoples. Imperialism’s mission is to subjugate peoples in order to grab their resources and alienate their culture by imposing a single globalized model.

Mali, like the countries of the Sahel, is under the direct influence of Western powers, who’s leader in West Africa is the French government. This situation has been reinforced by the conflict and the current occupation of more than 2/3 of the national territory.

As a reminder, when Mali became independent on September 22, 1960, President Modibo KEITA opted for the Socialist path of development. He then demanded that the French colonial army evacuate the military bases throughout the national territory on January 20, 1961.

President Modibo Keita, who’s SADI Party claims a large part of the heritage including the quest for national sovereignty and the socialist option, has, with the support of the People, triggered a general mobilization of all the vital forces of the nation. He has forged relations with the USSR, China, North Korea, Cuba, Yugoslavia and other countries of socialist Eastern Europe. He had undertaken a development policy for the national economy (agriculture, animal, mining research, industry, etc.)

The training of executives and technicians to support this policy has been actively supported by the countries of the socialist bloc.

With Sékou Touré of Guinea, Kwamé NKurma of Ghana, Modibo attempted to create an axis of resistance to imperialism in West Africa. This orientation was perceived very early by the French neocolonial regime as a direct threat to its interests in the sub-region and he fomented a military coup on October 19, 1968. Then began for our people the crossing of the dictatorial desert with its procession of dead, deported and missing. All freedoms were confiscated by the military and their supporters

Mali was brought back into the bosom of imperialist France and subjected to the dictates of the IMF and the World Bank.

It should be noted that in 1957 France began to prepare its plan for the partition and division of the country on the basis of ethnic and regionalist considerations in order to have in its hands a formidable means of destabilizing our nation. The country is still dragging the consequences of this plot and counts its dead, its displaced persons, its refugees, its widows and its orphans.

From 1990, the Malian people under the leadership of militant underground organizations and thanks to the pressure of the pupils and students of Mali led by Oumar Mariko overthrew the dictator General Moussa Traoré on March 26, 1991.

This popular uprising of March 26, 1991, which was to open a new opportunity to break down inequalities and steer the country towards development. The revolution of March ’91 was taken over by lackeys in the pay of the French colonial system which imposed its own benchmarks and so-called democratic values ​​on our people.

We fell back again, as early as the 1992 elections; in the dead end, electoral fraud, nepotism, open-air corruption, discrimination and the domination of the country by businessmen and soulless officials

Mali thus relapsed into the cycle of imposed and rigged elections, from remote-controlled rebellions without a program to a coup d’état without revolutionary leadership. We find ourselves in what a Malian intellectual rightly called the “feast of the brigands”.

Our country found itself with the invasion of Libya by NATO under occupation of 2/3 of its territory by faithless jihadist Islamists and separatists fabricated and guided from the Elysee Palace by the assassin President N. Sarkozy and his ministers Alain Jupé and Jean Yves Le Drian.

This invasion by a coordination of forces from Libya and separatists without convictions will offer to France a pretext to intervene in January 2013 with its Serval force which divided the country in two zones. France Serval force quickly transformed into Barkane to last better and better establish itself in the country.

France, to give itself a clear conscience and to camouflage its real intentions, dragged the renowned United Nations MISMA (which would quickly become MINUSMA) into the Malian and Sahelian quagmire. France thus imposed on the Malian authorities at all levels the timetables and strategic objectives that suit it.

It is currently dragging all of Europe in crisis into this Sahel trap called Takuba. Mali and the Sahel countries are thus squared and brought into line. France is inventing another tool with a tropicalized G5 Sahel appellation that allows it to do the job without getting its hands dirty. This is an instrument in the hands of France, equipped and financed by it.

We therefore find ourselves in desert or Sahelian terrain with an armada capable of demolishing the hills of the Dogon but incapable of bringing the slightest respite to the conflict and even finding the beginning of a lull in the security crisis that is going through the country.

Mali since January 2012 is a stateless country that rules, protects or represses. The regions of the north, center and part of the south are occupied directly by the Salafist groups who dictate their law. The French, Malian and international forces (Minusma, G5 Sahel) despite their number and their firepower are still unable to restore security. You have to wonder what the real plan of their sponsors is.

Interethnic clashes multiply and compete in cruelty and violence. It seems that the armed forces, especially foreign ones, do not take offense at these inter-ethnic massacres. Some fellow citizens and Africans suspect foreign forces of complicity in inter-ethnic attacks and massacres in order to perpetuate their well-paid occupation mission.

The country is currently torn between the occupiers who had been called by the Malian leaders under blackmail by successive French presidents.

Insurgency has put end to regime of neoliberal President

Since August 18, 2020, after the insurgency that put an end to the regime of the neoliberal President, member of the Socialist International Ibrahim Boubacar Keita, the country has almost been abandoned to the occupying powers (jihadists, separatists, Barkane, G5 Sahel, Chadian army led undercover by the French General Staff, MINUSMA, Takuba). The People no longer find each other. No way out is noticeable in this situation of no state.

The result today is that large groups, companies and French companies are jostling in Mali to occupy the economic ground not only at the level of mining potential, services, finances, provision of services and telecommunications. The country is then economically occupied and obliged to follow the injunctions of the WB and the IMF without hesitation or murmur.

Mali is at the heart of West Africa with 7 borders (Algeria, Niger, Burkina Faso, Cote d’Ivoire, Guinea, Senegal and Mauritania. This central position at the gateway to the Sahara has considerable geostrategic importance.

It should be remembered that Mali is rich in mineral resources (gold, uranium, bauxite, etc.) agricultural (large producer of cotton and rice), fresh water (crossed by the Niger and Senegal rivers), three large hydro-agricultural dams. Oil and gas are confirmed in parts of the country.

French imperialism has always dreamed of putting under its control this old country of civilization and which was the cradle of the three great empires (Ghana, Mali and Songhai). This country has always resisted from the wars of conquest of the 19th century until its independence on September 22, 1960.

France has always imposed its colonial currency the CFA franc on the countries of French-speaking Africa. President Modibo had challenged and abandoned him. We have been back in this neocolonial chain since 1984! How to develop when gold reserves are deposited in the French treasury and the fate of your savings is technically linked to the metropolis.

The SADI Party, since 2011, has sounded the alarm bells by drawing the attention of military and political leaders and leaders to the risk of partition of the country and inter-ethnic conflicts. We have warned since 2013 that France will take advantage of the cloak of fight against the jihadists to come back to reoccupy Mali and put an end to any hope of national sovereignty

Our political declarations denouncing the presence of foreign troops allow Malians and organizations in struggle to better understand the economic and political stakes of this war imposed on us. The People have understood everything. Denunciations have multiplied in all the countries of the Sahel, forcing the French president to call on his “local governors” to come and explain themselves in Pau in the last quarter of 2019.

The positions taken under these conditions by the President of Mali to block the electoral road to anti-French political candidates will radicalize the position of the People under the leadership of the M5 RFP and the Democratic and Popular Movement (MPD).This will precipitate its overthrow on August 18, 2020. This unfinished revolution has now been taken over by a part of the army favorable to the old order and to French positions in the military and political field.

Our Party will continue the resistance and the creation of spaces for consultation and solidarity between the Parties and the revolutionary militant left organizations. We are working in close partnership with the PDG of Guinea, PAIGC and others to build URDA.

SADI party, through its Secretary General, participated in the VI International Forum of Philosophy entitled State, Revolution and Construction of Hegemony, held in Venezuela from November 28 to December 5, 2011.

Since 2009, the SADI Party has been organizing Solidarity Days with Latin America and the Caribbean to pay tribute to the struggle of Comrade Fidel Castro.

Dear comrades, the creation of a new world order favorable to the peoples is a historical necessity and a demand of our Peoples. We need to pick up the pace and move towards this goal.

As requested by the Chairman of the SADI Party in Yalta, all Parties must contribute to strengthening the axis of peace consisting of Russia, China, Turkey, Iran, North Korea and of Cuba against the axis of war led by the USA and composed of NATO and Israel.

Strengthening the Peace Axis will undoubtedly help enforce peaceful coexistence and end invasions of countries by NATO against those they qualify as peripheral.

The SADI Party is working tirelessly today to strengthen the partnership with the Patriotic Party (Vatan Partisi) of Turkey and all revolutionary and anti-imperialist parties.

The Fight continues until the final Victory!

Secretary General of the SADI Party