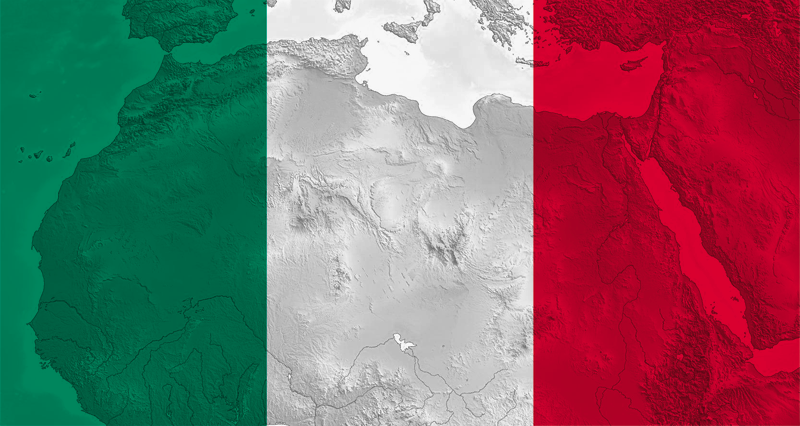 North Africa is a very important area in terms of contemporary geopolitics. The great world powers are competing in the lands between Tangier and the Suez to acquire local influence and positions in the great game in the Mediterranean Sea. In the north of Africa, several conflicts are underway in various fields: from energy to military, to the commercial sphere.

Geographically placed in the center of the Mediterranean Sea and stretched out towards North Africa, Rome has not had a coherent policy responding to its national interests towards the countries of the North African area for decades. Italy has been reduced to blindly following the imperialist agenda, even when doing so directly harms Italian interests. Paradigmatic in this sense is the case of the overthrow of Gaddafi in Libya. Although reluctantly, Italy participated in the elimination of its best ally on the North African shore without having known or been able to resist an initiative pushed by France, England and the United States.

Ten years after the fall of Gaddafi’s Libya and the season of the Arab Spring, the scenarios that emerged and the new balance of power have become unfavorable for Italy, which has weakened not only in Libya, but the entire Mediterranean, where it is now inferior in strength and capacity of influence compared to its relatively favorable position and even compared to what is required by many nations bordering the Mediterranean.

Yet, it wasn’t always like that. Despite being part of NATO at the time of the so-called First Republic, Italy conducted an autonomous policy toward the North African countries. The geopolitical strategy expressed after the war by personalities such as Enrico Mattei and Aldo Moro, who chose to act in defense of Italian economic and political interests in the Mediterranean, is one of the reasons for the distrust of their action by the allies of the countries adhering to the Born. Even other Italian politicians aware of this necessary strategic positioning of Italy, such as Bettino Craxi, have not had it easy in their relations with the Anglo-American allies. Just think of the Sigonella Crisis, where, with Bettino Craxi at the Presidency of the Council of Ministers, Italy had its last expression of sovereignty.

“There is no political independence without economic independence”, argued Enrico Mattei at the helm of the National Hydrocarbon Organization (ENI). Mattei had clear objectives: to provide Italy with an energy supply as direct, secure and diversified as possible, to undermine the monopoly of the seven sisters (the main multinational oil companies) and to put Italy back at the center of the Mediterranean at a geopolitical level. Thus begins his battle against the multinationals.

One of Mattei’s greatest successes corresponds to what is considered one of the greatest attacks launched on the system of the so-called Seven Sisters: the unhinging of the fifty-fifty rule imposed by the Anglo-American oil companies on oil-producing countries, according to which they benefited from only 50% of the profits in exchange for the granting of extraction concessions to foreign oil companies; without forgetting that the percentage often fell far below.

Mattei’s struggle against the ‘Seven Sisters’

Mattei’s first step took place in Egypt: here ENI would have granted an income that could have reached 75% also thanks to the purchase of a stake in the Société Coopérative Égyptienne du Pétrole. Mattei’s promise was that in the event of failure, the costs would be borne exclusively by ENI. This did not happen as they would soon discover an oil field in Abu Rudeis on the Sinai peninsula.

The activism of the Italian executive made the United States turn up their noses. On July 26, 1956, Mattei was present together with Nasser at the inauguration of works on an oil pipeline that was supposed to pass from Cairo to Suez; in the context of the Egyptian leader’s decision to nationalize the Canal, he proposed ENI services to Nasser to build the Aswan dam. In Washington, Mattei’s activism was not welcomed, as it was carving out a leading role for Italy in the energy match. Furthermore, by offering to contribute to the financing of the Aswan dam, it had in fact removed weight from the decision of the United States, which initially had offered to participate in the project only to back off following Nasser’s neutralist attitude.

Mattei died on October 27, 1962 at the age of 56. The plane on which he was traveling mysteriously crashed, probably due to an attack by unknown persons (the investigations have never really clarified the facts), in the countryside of Bascapè, a small town in the province of Pavia, while he was approaching the aeroof Milan Linate.

Going back in time by telling the strategy of Mattei’s ENI serves to underline the abysmal difference with the present day. At that time, with leaders like Mattei, Italy, despite being part of the Western alliance, could afford an autonomous policy that was not subordinated to Anglo-American interests.

Currently, Italy has become Egypt’s second largest trade and political partner in Europe, and the fourth in the world after the United States, China and Germany. As well as from a strategic-diplomatic point of view, Rome has in fact assigned Egypt the role of guarantor of stability in the Mediterranean and the Middle East.

The US, France and Germany direct Italy

The point is that both from an economic-commercial and from a strategic-diplomatic point of view, Italy’s moves are modulated on directives established in Washington and supported in Berlin and Paris, not the result of an autonomous policy based on national interest or geopolitical strategies decided in Rome.

Libya was mentioned at the beginning of this article. The country that best represents the dramatic lack of a coherent and autonomous policy in the Mediterranean and towards the countries on the north shore of Africa. Italy, as we have highlighted, supported the Libya intervention in 2011, an attack on the country not wanted by and not decided by Rome, but by the French, British and US governments. As a result, it was then driven by the will of these nations.

Moving to Tunisia the scenario does not change. Here too, Italy has an intangible policy. The only concern of the current Italian ruling class seems to be to stop the landings of migrants from Tunisia and reach new agreements regarding the repatriation of illegal immigrants. For the rest, the decisions are delegated to other capitals such as Washington, Paris and Berlin.

A political class that considers itself ‘Mitteleuropean’

The result is the complete loss of influence and weight in the Mediterranean and towards the North African countries. A certain political class that thinks of itself as ‘Mitteleuropean’ (Center-European) has committed a sensational mistake, perhaps not entirely unintentional. Without any sovereignty and a clear strategy, Italy ended up becoming the object of the ambitions of French finance; and by making Italian industry dependent on the role of supplier of the German manufacturing system, it deprived the economic sector of the autonomy necessary to innovate and export. In fact, the last ten years in particular for Italy have represented perhaps the period in which the worst choices in terms of the economy have been made, such as the inadequate investment in human development, which have been matched by the lack of choices in geopolitics and the Italian relegation to the Mediterranean and in North Africa.

Continuing on this path, Italy has no future, tied as it is, hands and feet, to the dying US empire. So what is to be done? First and foremost, a wise and far-sighted government should begin a process of disengagement from Washington. Slow, gradual, without any difficult traumatic ruptures for a country practically occupied and considered by the United States as a sort of aircraft carrier in the center of the Mediterranean. The Draghi government cannot give life to this process: it is in fact the most fanatically pro-European and blindly Atlanticist executive in the history of Italy.

What should a government that wants to turn the tide, stop the decline and put Italy back geopolitically at the center of the Mediterranean and return to having an autonomous policy towards the North African area do? It should pursue a politics diametrically opposed to rapacious imperialism, with its corollary of military interventionism and market dictatorship. A new policy based on cooperation, on mutual benefit. In short, win-win policies aimed at transforming the entire Mediterranean into a sea of peace and prosperity, where every country and people can live by deciding their own policies in full autonomy and sovereignty.

In this direction we can take note of the idea of creating an African-Mediterranean Euro Alba (on the basis of the Latin American ALBA-TCP) launched by Professor Luciano Vasapollo, economist of the “La Sapienza” University of Rome. A great Euro-Mediterranean alliance between sovereign states – Southern Europe and North Africa – capable of restoring freedom, civilization, sovereignty and democracy to individual populations. Such an alliance would be able to break the logic of German mercantilism that underlies the absurd austerity policies adopted by the neoliberal European Union that is causing economic depression, de-industrialization and debt in the southern countries.

On the occasion of a conference, Professor Vasapollo explained that “to defend the subordinates, to defend the workers, we need to question the parameters imposed by the neoliberal and imperialist European Union. It is essential to recover spaces of popular sovereignty. Therefore, today, we are in a position to present a concrete alternative political economic program. The emergence of a more democratic context than unipolarity, in a new and balanced solidarity multicentrism, sets the objective conditions for the establishment of the Euro-Afro-Mediterranean Alba. Looking at those models that have put into practice experiments with anti-imperialist connotations and active complementarity, it is possible to put the breaking of the cage on the agenda. An alternative system to the euro is not so desirable, but absolutely necessary and possible.”

The fundamental long-term strategic perspective for Italy to break with the US-led unipolar order, to join the emerging multipolar order based on mutually beneficial cooperation between Russian-Chinese-Eurasian sovereign states, necessarily passes through the Mediterranean and North Africa.