The Crimea Platform in documents of the Ukrainian Foreign Ministry 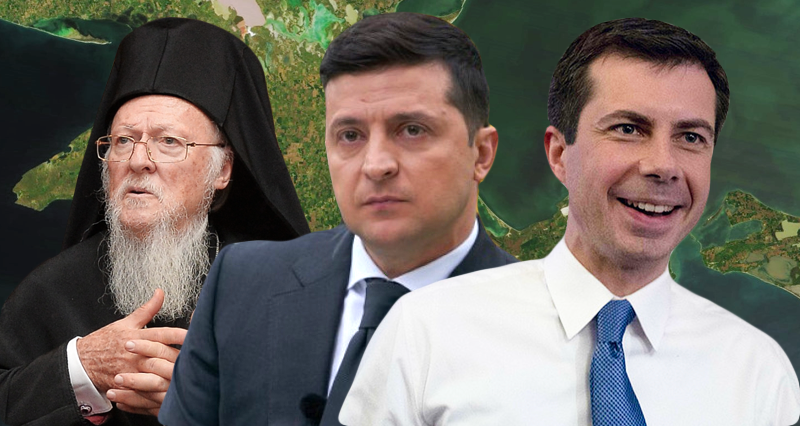 The Crimea Platform will convene in Kyiv on August 23. United World International has already reported that this summit, where Turkey is also expected to participate, is in fact a trap for Ankara. UWI has displayed the organizers’ strong ties to the United States and the Fethullah Gülen Organization, and reported in detail that Pete Buttigieg, the Secretary of Transportation who will represent the US on the summit, is an LGBT activist and a friend of the PKK/PYD. UWI has described that the summit has a constitution that directly targets Russia and thus will harm deeply the Turkish-Russian relations, which are of utmost importance in the times ahead.

Today, we will continue reporting on the dangers that await Turkey in the summit of the Crimea Platform by disclosing a document of the Ukrainian Foreign Ministry.

Ukraine wants to make use of Crimean Tatars

It is obvious that the Ukrainian government intends to use the Crimean Tatars and Ankara according to its own interests by including Turkey into the platform. Back in 2014, Kyiv had promised Ankara to introduce three new laws, which would raise the status of the Crimean Tatars. But until today, only the law titled “On the indigenous people of the Ukraine” has been approved, which has no binding at all. The law foresees no mechanism at all for widening the local people’s rights. Besides, the Crimean Tatar’s representation organs are not recognized legally.

Moreover, Turkey has displayed readiness to construct housing for the immigrant Crimean Tatars that are in need. But Ukraine rejects to provide any construction area for this project at all. Kyiv’s true stance towards the Crimean Tatars is expressed by Arseniy Yatsenyuk, leader of the Maidan protests and former Ukrainian Prime Minister, who demanded that “Tatars should be send back to where they came from”.

These examples and the unfilled promises given to Turkey show clearly that Ukraine’s concern is not the rights of the Crimean Tatars.

The summit has already failed

Notwithstanding all the efforts of Zelensky, Ukraine was also not able to provide the world with a consistent program in the name of the platform. This program is being hidden on the excuse of potential pressure from Russia. It becomes obvious that Kyiv acknowledged the failure of its project even before the platform has been founded.

Therefore, it has been decided to raise the numbers of participants by inviting more representatives from smaller countries that have no influence on the matter. The important  “actors” will most probably be represented by diplomats, in other words, their participation will be fully symbolic. Important international actors do not display a serious interest in the Crimea Platform. And even if they did so, Turkey should act on this matter according to the interests of the Crimean Tatar brother and its own national interest.

Ankara’s unconditional support to the platform by sending a high-level representation will create the perception that Turkey accepts Kyiv’s discriminatory policies against the Crimean Tatars. Kyiv will not take any concrete step to fulfill the promises made to Ankara.

Besides, Kyiv does not present a concrete road map to its allies on how to liberate Crimea from “the occupation”. The fact that the Crimea problem can be discussed in several international forums, including the UN, much more efficiently makes this platform even more obsolete.

Photo trap to the Turkish delegation

Meanwhile, the US indicates to the global public opinion constantly its intention propagate its own ideological agenda, including LGBT, on every occasion. Ukraine is ready to assist Washington on that. Just before the Crimea Platform summit, a document of the Ukrainian Foreign Ministry was published in a Telegramm channel.

The truth of the document was not denied until now.

In the document, the Ukrainian Foreign Minister Dimitry Kuleba asks permission from his country’s Prime Minister Denys Shmyhal to lead preparatory talks.  These talks shall aim to ensure that the summit delegations from Turkey, Qatar and the UAE meet with the US representative and provide joint public pictures. In other words, the Ukraine wants a photographic documentation of the meetings between Turkish diplomats and the US Secretary, who has entered the Biden government as a representative of LGBT interests.

In the same document, the Ukrainians insist on choosing diplomats whose career will not be damaged by meeting the US LGBT activist turned Secretary of Transportation. The document admits that this meeting constitutes a dangerous situation for the representatives of Muslim countries. But US interests weigh heavier for Ukrainian officials.

Another LGBT-connected name besides of Buttigieg that might visit Kyiv these days is Emmanuel (Adamakis). Emmanuel is currently the Metropolitan of the Greek Ecumenical Patriarchate in Chalcedon (Istanbul). He was formerly the metropolitan of France. During those times, it was reported in the Greek community that the Metropolitan had been seen in a restaurant together with a young homosexual. His church had defended the priest decidedly when this was accused of sexual violation.

The visit of Emmanuel, who has been appointed to Chalcedon (Kadıköy, Istanbul) recently, on the same days to Kyiv as the LGBT activist US Secretary will be exploited as an element that completes the picture. At the end of the day, the visit of the Metropolitan from Istanbul will be presented as Turkey’s representation.

Besides, the Patriarch Bartholomeos will also be in Kyiv during the days of the summit. There are serious criticisms against the Patriarch in the Ukraine in the recent times and protest actions are already being planned. The Patriarch is considered as a defender of US and Greek interests in the region, thus, avoiding that his visit is perceived as representation of Turkey will be crucial.

Ukrainian personalities of culture, science and sports have published an open letter to the Ecumenical Patriarch Bartholomew I, demanding the cancellation of his visit. The protests are rooted in the fact that ignoring all rules of his church, Patriarch Bartholomew signed an edict (tomos) that declares the independence (autocephaly) of the Ukrainian church from the Muscovite Patriarchate. This signature has caused a new division within the Ukrainian Orthodox Church, leading to pressure against the opponents to the autocephaly and a new crisis in the relations with Russia.

Bartholomew’s visit to Kyiv will therefore also sabotage the balance Ankara seeks to establish between Kyiv and Moscow. Bartholomew is a citizen of Turkey and will be perceived as Ankara’s representative. His visit will provide an opportunity to those groups in the Ukraine that are hostile towards both Russia and Turkey.

The participation at the summit should be cancelled

Besides of the Turkish representatives participation in the platform; the visit of a personality like Bartholomew to Kyiv on the same days as the event, which only aims to deepen hostility to Russia and create electoral support for Zelensky, still offers no prospect to succeed and will only be perceived as Ankara’s strong support for the summit.

Even Ukraine’s allies in hostility towards Russia are represented at a low level on the summit of the Crimea Platform. Given this fact, Turkey’s participation on the summit contradicts the country’s national interests. The only way to avoid the traps set by the US, Ukraine and the Patriarchate against Turkey is to cancel the participation in the platform.