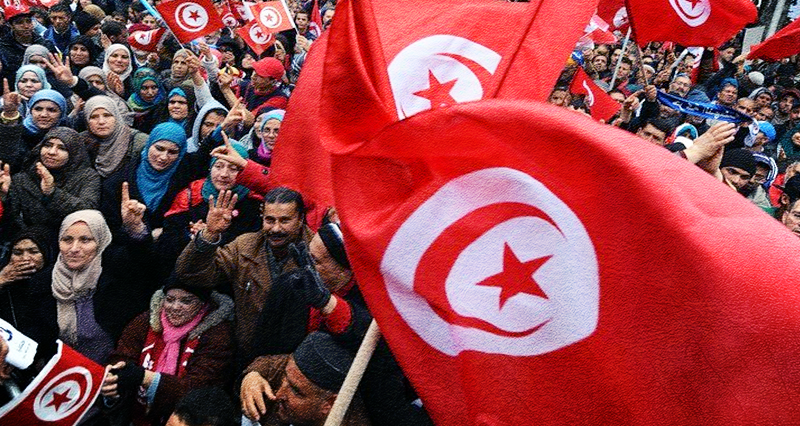 The political crisis in Tunisia, which erupted after President Kais Saied has dismissed the coalition government that included Ennahda, a party inspired by the Muslim Brotherhood, does not only consist of the local dilemmas of Tunisia but also contains ideological, class-based and geopolitical polarizations in the wider regional context.

The fracture points of Tunisia

We can talk about two different types of fracturing within the Tunisian national politics;

And taking a geopolitical look at the events in Tunisia, a country of strategic importance in North Africa, we can observe:

1. The resonation of the ongoing rivalries over North Africa between the US, the EU, China and Russia,

2. As well as the rivalries between the axis of the United Arab Emirates, Egypt and Saudi Arabia on one side and the Turkish-Qatari axis on the other.

It would be an oversimplification to describe Tunisia as a synonym of examples of Turkey, Egypt or Syria, just as it will lead to some incorrect and misleading conclusions to evaluate the events only through geopolitical or ideological perspectives.

That is why I have spoken with some Tunisian experts in order to understand what lies beneath the political breakup in Tunisia.

When I asked Khaled Abid, one of the most prominent contemporary historians in Tunisia, about the internal dynamics in Tunisia and the background of President Kais Saied’s decision to dismiss the coalition government he gave the following answer:

“Tunisia is going through such a dramatic process in many aspects. We are in an endless economic crisis, the social polarization is deepening more than ever, and the political institutions are completely corrupt. Tunisian people describe the last 20 years as a period of anarchy and despair; a period when the concept of nation-state has demolished completely. This is exactly why the vast majority of Tunisians approve the decision taken by President Kaid Saied. Whether these decisions are taken in accordance with the Tunisian Constitution is subject of another debate…”

Abid has commented on the argument of “a coup d’état taking place in Tunisia” as follows;

“I do not wish to use the word ‘coup d’état’. The vast majority of Tunisians had already been seeing Ennahda as the main cause of this social unrest, thus the President has made an according  decision against Ennahda.”

When I asked whether Ennahda was actually to blame for Tunisia’s political, economic and social breakdown, Abid replied:

“Objectively speaking, Ennahda is just as responsible for the situation we are currently in, as much as any other political power in the nation. But here is an important difference for Ennahda. Since 2011, Ennahda has always been in the government, and it has made some irreparable mistakes in terms of corruption. So that was why the charge of blames is put on them.”

“Do you have any evidence on a possible Gulf intervention?”

Abir has commented on the “possible role of the United Arab Emirates in the events in Tunisia”, an idea very much circulated in the media and very present in people’s minds, as follows:

“There is a lot of talk about these allegations… The role of the United Arab Emirates, Qatar and other Gulf countries etc. There is a really important question we have to ask first: Do those who came up with such allegations, have any evidence? We have to act based on solid evidence. If there is any evidence, it has to be revealed to the public. We cannot simply act on hollow allegations.”

At this point, it is important to mention that the UK-based news site Middle East Eye has published some documents of unspecified origin, regarding the UAE’s role on the events in Tunisia.

As our conversation reached its end, Abir stated that he did not see the possibility of a civil war in Tunisia in the future. ”Tunisia is not Syria or Egypt. Our internal dynamics are much different from those countries, so you cannot compare the incomparable.”

Tunisian journalist and writer Bessam Hamdi, whom I also consulted on the political breakdown in Tunisia, has begun speaking about Ennahda’s mistakes over the years;

And President Saied’s decisions can be seen as a solidified expression of his political disagreement with this organization. His decisions that we are talking about were taken within the constitutional boundaries.”

The class struggle in Tunisia

An important development after the President’s decision to dismiss the government was the meeting between the President and the officials of the country’s largest trade union, UGTT.

Hamdi shared the following information about this meeting;

“UGTT has an important role in Tunisian politics, and it has managed to solve many crises by mediating between the opposing parties. Some sources say that the UGTT supports the decisions taken by the President. The union is spreading the propaganda to its member workers that the recent events did not constitute a coup d’état. The union leaders are meeting with different political parties in order to try coming up with a solid roadmap. The working class in Tunisia is well-aware that the resources of the state and the nation are being exploited by a business elite that have close ties to the political parties, which is causing a massive class-based reaction.”

Hamdi made the following assessments on the direction of the future Tunisian foreign policy following this entire process;

“The Tunisian President does not choose to act together with a single front when evaluating the problems in the Middle East and the Arab World. This also applies for the issue in Libya. He tries to keep Tunisia neutral and independent.

Neither the United States, nor any other country has the capability to intervene in Tunisian internal affairs, contrary to what is alleged. The cooperation between the Tunisian and US governments in the field of counterterrorism is continuing. And as for our relations with Russia, we keep the relations that are ongoing with mutual respect.

China on the other hand, gives out economic support to Tunisia. We have an extensive cooperation, especially in the field of healthcare. We expect even more Chinese economic investments in the coming period.”

When we put together the assessments of these experts with deep knowledge on Tunisia and the recent actual events in the country, then we see a picture that is initially shaped by internal dynamics, but where some foreign powers try to execute influence on.

It is very clear that the Tunisian people, who have strong class-consciousness and secularist traditions, will put every effort they can in order to protect their own future.

It is another indisputable fact is that the Muslim Brotherhood movement is the sole loser of this entire process, through its affiliation to Ennahda.

It seems that a fast moving process is awaiting Tunisia.