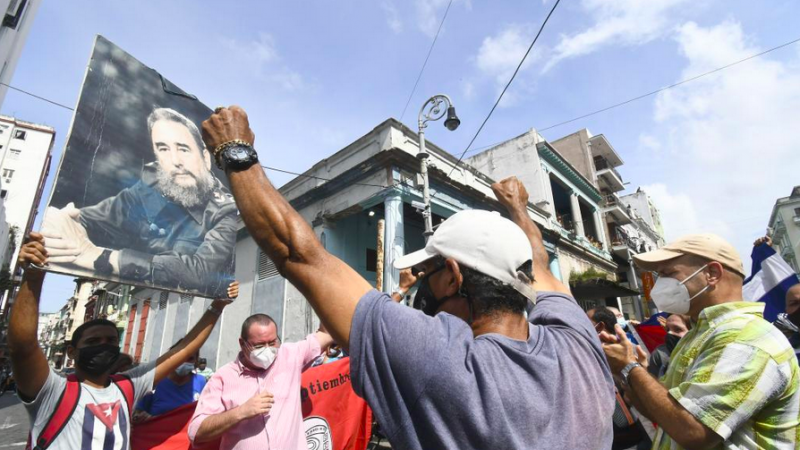 Cuba’s streets witnessed protest gatherings on Sunday, July 11th. Western media such as the British BBC reported of “thousands rally against government”, although the news text acknowledges that “the crowds of protesters do not look particularly large”.

The US Washington Post reported of “the biggest anti-government protests in decades”, based on social media footage. The newspaper also based its reporting on a phone call with Noel Alonso Ginoris, “a writer and member of Havana’s San Isidro artists movement that has sought to challenge government authority”, as WP states, who declared “I have never seen such a protest in my life”.

Protests are reported to have started in San Antonio de los Banos, a small town 40 km outside of Havana, and than spread around the country. Video footage claimed to belong to actual protests shows people marching in the city center of Havana around the Capitolio and the famous promenade, The Malecon.

In video recordings, people are seen as shouting “freedom”, while various protesters were reported to carry US flags. Consequently, a “SOSCuba” hash tag was opened on twitter, pretending the state of Cuba was a sinking ship to be saved by intervention.

International media reports that the crowds protested against shortages of food and electricity supply, with recent electricity short cuts of up 6 hours.

Marco Rubio, Republican US senator known for a hawkish line against Cuba, has called the protests an uprising “against socialism”, demanding a harsh line from the Biden administration. Rubio, who is based in Miami and leads the community of exile-Cubans, also criticized twitter for presenting the protests as Covid-measures induced.

In a further tweet, Rubio called the Cuban military to “defend the people not the communist party.”

Some protesters meanwhile looted shops in La Habana and were detained, while the videos of their detentions were used on social media as indication of a reaction of repression by the government.

The President of Cuba, Miguel Diaz-Canel headed to San Antonio de los Banos on the day of the protests and met the local population. Diaz-Canel held a speech here, where he stated the following:

“There is dissatisfaction with the situation we are living. But there is a also a counterrevolutionary group of mercenaries, paid via agencies by the government of the United States to organize these types of protests.”

Upon returning to La Habana Diaz-Canel held a televised speech, calling the Cuban people to “defend the revolution”.

“We have always been honest, open and clear, and we have always explained to our people the complexities of the current situation”, said Diaz-Canel, acknowledging that the country is in a “difficult conjuncture”.

The Cuban president reminded that the Trump administration had tightend the sanctions, which Cuba calls ‘bloqueo’ because they also affect the country’s commercial relations with third parties. Diaz-Canel mentioned the US pressure on Cuba in finance and energy trade, with leading to 243 different measures taken against Cuba and peaking in the enlisting of the country as an “international sponsor of terrorism” in the last days of the Trump administration.

Miguel Diaz-Canel emphasized that these sanctions have, together with the COVID-pandemic, “limited the country’s sources of foreign currency, leading to under-supply of food, medicine, construction material and energy, leading to cuts in production and exports.”

Cuban president calls to the streets to “defend the revolution”

The Cuban president also mentioned the COVID pandemic, “affecting the country in the midst of these restrictions and damaging the crated but small serves the country had”. But still, emphasized Diaz-Canel, “we faced the situation with braveness, and we shared the few we had among us, and nıt only among us but with the world, as the International Medical brigades we sent to other countries demonstrate.”

Diaz-Canel also reminded that Cuba had invented the only approved Latin American vaccine against Covid, whose production was limited due to sanctions and energy under-supply.

Miguel Diaz-Canel stated that in the midst of this situation of sanctions and pandemic, US-paid groups surfaced claiming that the Cuban government was failing and demanding a humanitarian intervention.

“I am giving this information also to remind that in Cuba, the streets belong to the revolutionaries. The state and revolutionary government, led by the party, has all political openness to discuss the solutions to problems, to exchange arguments, to enable the people’s participation. But always recognizing what the root cause of our problems is, without getting confused.”

After calling the US to lift the embargo, Diaz-Canel continued:

In this sense, the President of Cuba concluded:

“Therefore we call on all the revolutionaries of our country, on all the communists to take out on the streets wherever they are to fight the provocations. We will not permit that anyone manipulates our situation, impose a non-Cuban plan or follow an annexionist line. We will defend the revolution.”

Thousands in the streets to defend the revolution

Upon the call of the Cuban President, thousands of Cubans took to the streets to support the government and reject the protests in nearly every city of the country.

Several revolutionary gatherings were shouting “yo soy Fidel” (I am Fidel), referring to the leader of the Cuban Revolution, Fidel Castro. “Long live the Revolution, long live the free Cuba” were among frequently chanted slogans that attacked US intervention into the country’s domestic politics.

Speaking to the Cuban media, participants of the gatherings presented their activities as “defending the fatherland”.