The Bicentennial Congress of the Peoples of the World 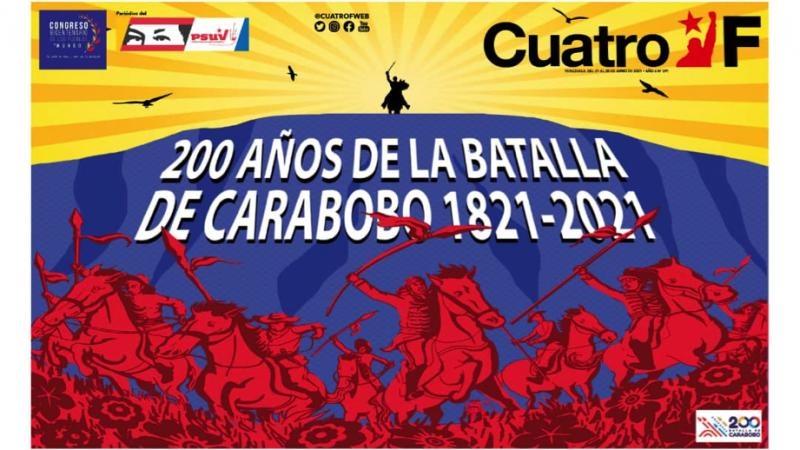 The Bicentennial Congress of the Peoples of the World (BCPW), under the motto “The union of women and men for the Revolution”, took place in Caracas, from June 21st to June 24th, of 2021. This popular Congress gathered grassroots movements, political parties, labor unions, NGOs, as well as intellectual and social activists, among others, in the capital of Venezuela, to show to the world, once again, the international solidarity of the people that support the Bolivarian Revolution.

The Bicentennial Congress counted with the participation of more than 500 national and international delegates, in order to show solidarity with Chávez, Miranda and Bolívar’s homeland and build a common agenda to resist and counter imperialism in all expressions. The preparations for the this congress have started in March, with previous online and presence meetings between sectors at the communal, municipal, state and international levels that led to the consolidation of this meeting between brothers and sisters in struggle from the five continents.

What was the Bicentennial Congress of the Peoples of the World?

The Battle of Carabobo, that took place 200 year ago, was the definitive victory of the independence struggle of Simón Bolivar against the Spanish colonialist empire. It was also a starting point to consolidate the liberation processes of the rest of the peoples of South America.

Today, as Venezuela faces new imperialist and colonialist threats of our times, the Bicentennial Congress of the Peoples of the World brought together organizations, movements, parties, unions and social activists from around the world who came together in the purpose of fighting for the emancipation of humanity and for the social justice.

As the Venezuelan Foreign Minister, Jorge Arreaza, said on June 24th: “Carabobo was much more than a military battle. It was a comprehensive geopolitical campaign, an essential step to advance the Bolivarian plan for the liberation of Our America. The route from Carabobo to Ayacucho became irreversible on a day like today, 200 years ago. Long live Bolívar!”

In recent years, Venezuela has been facing a brutal multiform aggression, led by the government of the United States. This has manifested itself through a systematic campaign of aggressions that include an economic, financial and commercial blockade with a negative impact on the life of all Venezuelans.

Venezuela has been the victim of threats of military intervention, mercenary incursions, terror actions such as the assassination attempt against President Nicolas Maduro. Not only Washington conspires against Venezuela, but also other complicit governments that seek to put an end to the transformation process initiated by President Hugo Chávez in 1998.

The struggle for Venezuela is part of a larger struggle, where a model of society with a focus on profits versus a model of society focused on the human being is in dispute. The crisis of the capitalist system has been even more exposed in the framework of the pandemic; it demonstrated that the system is not capable to guarantee health or rights to all human beings. The system also seeks to generate another Cold War scenario to weaken China and the multipolar world, thus perpetuating the US hegemony. The Bolivarian Revolution, as well as other liberation processes around the world, must join forces to displace once and for all the exclusive capitalist system.

Carabobo was the great battle led by Simón Bolívar that opened a new historical cycle in Venezuela and definitively consolidated the path towards the emancipation of the American continent. President Chávez envisioned the bicentennial of Carabobo also as the beginning of a new cycle and the crisis of capitalism together with the crisis generated by the pandemic, also calls us to mark the beginning of a new historical cycle where the dominant model is defeated.

Objectives of the Bicentennial Congress

– To review and development of a common international agenda, whose epicenter is the struggle of the peoples for their sovereignty, for their self-determination and for the defense of human rights against unilateral coercive measures illegally applied by a group of countries, as well as to develop joint actions in the face of deepening conditions and contradictions in the world in the midst of the Covid19 pandemic.

– To contribute to the organization and strengthening of the balance of the planet: the promotion of the pluripolar and multicentric world.

– To contribute to a greater understanding of the reality of Venezuela from the particularities of this country and evaluating the challenges that Venezuela faces today.

– To establish a common agenda (Agenda Carabobo) to outline 10 great goals for the progressive, left, anti-imperialist and anti-colonialist camp in the face of the post-covid world.

– To recognize Venezuela as one of the main spaces where the great ideological dispute in the world is taking place and express support for the Bolivarian revolution.