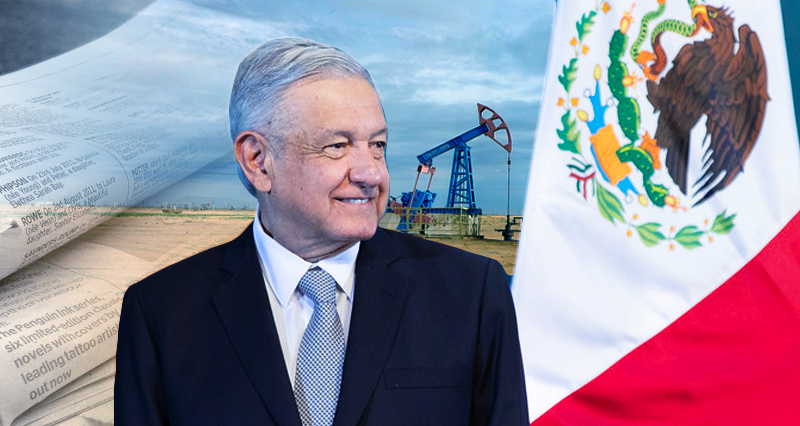 Mexico went to elections on June 6th. The electorate determined the 500 members of the Chamber of Deputies, the lower part of the bicameral parliamentary system, 15 governors of federal states and a great number of city councils and mayors.

The country is governed by a federal presidential system. The current president, Andrés Manuel Lopez Obrador, widely known and cited as AMLO, is elected until 2024. But still, global media organs that are known to represent the financial capital have started a campaign before the elections targeting AMLO.

From the Wall Street Journal (WSJ) to the Economist, from the French Le Monde to the German Die Welt, western media suddenly was filled with harsh criticism on the Mexican President.

The British Economist called the President first a “populist” and then even a “false Messiah”. Le Monde spoke of a “hyper-president”, while Die Welt described AMLO’s policies as “Voodoo – Authoritarian”.

The Financial Times titled AMLO takes “Mexico back to the future”. The WSJ described him as an “old-fashioned leftist”, asking whether he is “a threat” to Mexican democracy.

Finally, The Economist even called for a “tactful” US intervention, writing the following:

“The United States needs to pay attention. (…) America ought not to turn a blind eye to creeping authoritarianism in its backyard. As well as sending vaccines, unconditionally, Mr Biden should send quiet warnings.”

What is going on in Mexico?

To begin with, the mid-term elections have been a slim success for AMLO. His party, Morena, and its allies in the “Together we make history” coalition, the Labor Party (PT) and the Green Ecologic Party of Mexico (PVEM) have gained the 280 members the majority in the Chamber of Deputies, although losing the 2/3 majority from the 2018 elections necessary to make changes in the constitution. Additionally, the governing coalition won in 11 of the 15 state governors.

Commenting on the results, Mexican President Andrés Manuel Lopez Obrador vowed to continue the “Transformation Process” and announced that he might “pact with other powers” to continue constitutional reforms.

Leaders from the oppositional PRI responded positively. This is bad news for the above mentioned media organs, who had openly called to stop AMLO getting a majority exactly to avoid these constitutional reforms.

But what policies of AMLO exactly have caused Western media organs, known voices of international capital, to target the Mexican President in such a harsh way? Let’s take a look on their complaints.

AMLO’s energy policy and specifically oil policies tops the list of complaints from the international capitalist media. Mexico is an important global oil producer, producing 2% of the crude oil of worldwide in 2019, according to BP’s Statistical Yearbook. Producer number one is the US with 17.9%, followed by Saudi Arabia and Russia, 12.4 and 12.1% respectively and Canada with a share of 5.9%

PEMEX (Petróleos Méxicanos), the Mexican state oil company plays a central role in both oil economics and the country’s general economic activity. The company announced to have generated a revenue of 75 billion US $ in 2019, contributing 12% of all national tax income.

For years, Western institutions and media have demanded further privatization of Mexico’s oil industry. But President Lopez Obrador heads exactly the other direction, among others with a new law on energy.

His government has taken several steps that re-nationalize the energy sector. Some of these steps were the following:

The Economist thus qualifies AMLO’s policies as “an eclectic mix of statism, nationalism and nostalgia for the 70s”.

“The energy sector’s activities have been turned in private business. National capacities of production and technological development were substituted, and PEMEX and the Federal Electricity Commission have been converted mainly to simple administrative units that mainly benefit foreigners. The nation’s right on its territory and the included strategic resources is undeniable and must be administrated in favor of Mexicans.” (Article 4 – “Defending the national sovereignty and independence and rejecting policies of appeasement”)

Besides of the oil sector, the president also has halted all new mining concessions, especially to Canadian companies, and floated the idea of nationalizing the country’s lithium reserves, reports the WSJ.

“For the U.S., the populist president is a sharp break from the type of politicians who have led Mexico since the mid-1980s: Most studied in the U.S., appointed cabinet ministers with diplomas from the world’s top universities, embraced globalization. (…) They also drew Mexico far closer to the U.S. But Mr. Lopez Obrador retorted that he wasn’t interested in private companies: ‘To put it less bluntly, the only businesses that merit our attention are state businesses, because we are public servants. The government is not a committee to service private businesses, corporations, banks and companies.’” – The Wall Street Journal

Central Bank for a “social” and “moral” economy

The global financial capital media is furthermore also concerned about the future financial and monetary policy. They do state that AMLO has followed a policy of limiting especially foreign debt and welcome his approach of limiting top-level civil servant’s salaries.

But the future policies of the Central Bank will cause discussion. AMLO has already declared not to prolongue the current CB Director’s job, announcing to appoint someone to the Central Bank leadership with “greater sense of social and moral economy”.

A central banc reform is already in the making. The Morena program is quite radical concerning the economic model:

“The global economic crisis has revealed the failure of the neoliberal model. The economy policy imposed by the international financial organizations leads to the fact that Mexico is one of the countries with the slowest growth.”

Instead, proposes the program, “needs the state to assume responsibility to lead development without foreign interference.”

The German daily Die Welt already expects that AMLO will prefer the Central Bank to transfer surplus to the government, instead of serving existing foreign debt.

The Bank of America expects the new Central Bank Governor to lay more emphasis on production and development then on fighting inflation.

“In Lopez Obrador’s eyes, Mexicans fall into two groups: the people, whose authentic will he represents, and the elite, who are to blame for all Mexico’s ills. He sees himself as on a historic mission to sweep away the rotten habits of the past and establish a republic of virtue.” – The Economist

The military as an economic actor

Growing importance as an economic actor receives the military in the presidency of AMLO. Mexico City’s new airport, the former project has been cancelled in midst of construction following AMLO’s opposition and a referendum, is being built by the military, which also will operate it.

The operation of several ports, borders has been transferred to the military, as well as the construction of the Tren Maya, a 1500 km-rail road that encompasses the Yucatan Peninsula.

Interestingly, AMLO has defended the military’s construction and operation of the railroad project as a protection “against future privatization”.

And when AMLO detected that there was a “lack of commercial inclusion and social dimension in banking” because private banks would not operate in rural areas, the answer was clear: The military will construct and operate no less 2700 braches of the “Bank of Wellbeing”, proving saving and transfer options to rural areas.

The military’s rising economic activity is another indication that AMLO pursues a development policy with the state as the main actor.

Global capitalist media has already accepted several ‘sins’ of the president: the rising of pensions, new minimum wage regulations, restrictions to use subcontractors, which will limit especially the manufacturing maquiladora industry along the US border, wide spread financial support to rural areas and stipendiary for the young are taken for given.

But Wall Street Journal and its friends do well know that AMLO’s abovementioned policies take place within a broader concept, as the president has announced: The “Fourth Transformation”.

After Mexico’s Independence from Spain, 19th Century wars against the Church and large scale land owners, the 1910 Mexican Revolution that carried the poor on the political theater and provided the state a leading role, Andrés Manuel Lopez Obrador intends to transform the country for a fourth time.

The elections of the 6th of June have displayed the majority’s support for the transformation by at the same time leading AMLO to compromise more with the opposition in he wants to realize constitutional changes.

The first “open arms” reaction from the traditional, neoliberal PRI must have been a very cold shower for the Economist & co.