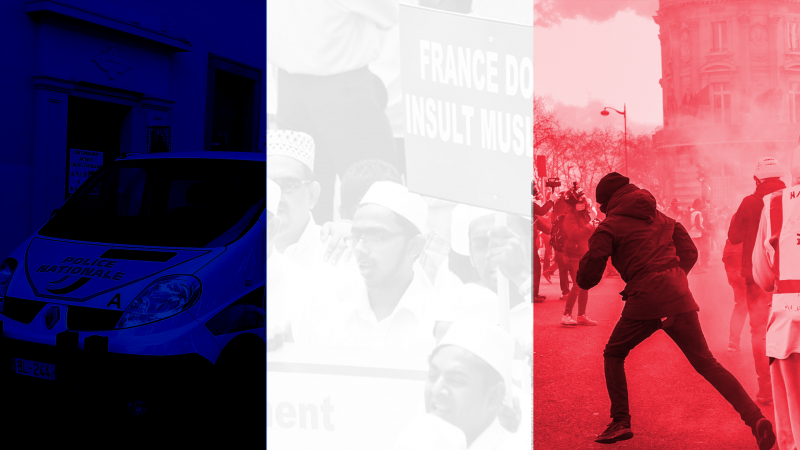 In the last part, I had argued that the public letter among others signed by French Generals on duty and retired was directed against the French government, taking  a racist and anti-islamic stance, targeting the Muslims living in France and defending the country’s imperialist expansionist policies.

The Turkish press reported on the event with headlines such as “French officers call to coup d’etat against the government”. I disagree with these headlines. In my opinion, the generals who signed the letter and the Macron government follow the same politics.

Who are these generals?

The generals, who consider themselves patriots, state that France faces danger from within:

“The Islamists and the banlieues armies want to take away our nation’s soil, they want to turn these areas into places that are governed by dogmas which contradict our constitution. (…) If nothing is done (…) this chaos will end in a civil war, we will assume our responsibilities and deaths will be counted in the thousands.”

Whom does the French generals point to as the enemy within? The marginalized ones, the ones living on the edges of the cities in the banlieues, the Muslims from North and West Africa, Algeria, Tunisia, Morocco, Senegal and Mali as well as the Turks. The poor ones who have been abandoned since years to their destiny, who have been pushed out and expelled from the social, cultural and economic life, who have been put into ghettos, and who have lost all hope in face of discriminatory or even racist policies and practices.

For a very long time, Muslims have always been seen in France as potential criminals by both leftist and rightist governments. Their neighborhoods, the banlieues, have always received less communal service and instead more police and security measures. More and more police stations were built and police forces are mounted up. The police baton, drug gangs or terror organizations have replaced the welfare state.

And now the French Generals state that the Macron government is not fighting enough against these communities, whom they consider enemies.

This is not patriotism! This is outright racism! The Macron government, as well as the previous ones pursued the same racist politics. I have lived 40 years in the banlieues of Paris, in Lyon and Annecy. I have worked as a social worker alongside Muslim immigrants for 10 years I have been witness to all these situations I described above.

Even before the global Covid pandemic, France was already a stage for big popular movements and trade union struggles. The country was following the 2008 financial crisis at the edge of economic bankruptcy. The crisis had spread all over the world. Europe had taken its share. The European Union had entered a dead end when searching for a joint solution.

The system had crushed down. France was in a debt swamp. The country was failing in producing a balanced budget, social security systems and institutions for unemployed were creating deficits nearing bankruptcy, the capital was escaping to countries with lower labor costs and industrial investments were decreasing. All these developments were leading to rising numbers in unemployment and poverty.

The conservative and social democrat governments answered the crisis again and again with old and already failed neoliberal recipes. They were unloading the weight of the crisis upon the workers.

In these circumstances, the Yellow Vests appeared, accompanied by the trade unions that were resisting a pensions reform. Both caused months of nightmares for the government. The government responded with police repression, resulting in dozens of deaths and over 4 thousand injured. But the government failed.

The pandemic saved the day for the government, but it has also deepened the already existing crisis of the national economy even more.

The government has no solution. They pursue policies of aggression, occupation and expansion against oppressed people in their foreign policy. And now, it embraces old, rusty, imperialist and racist theories of blaming the Muslims for the country’s crisis in order to repress the popular movement.

Spreading fear in the society

Right within this process, the generals’ letter appeared. With its anti-islamic and racist provocations, it delivered the Macron government another tool to use in its crusade against Muslims. Fear was spread that “chaos was about to break out” and that “a civil war” was on the horizon. This strengthened Macron while the country is heading to elections.

The neoliberal Macron had not been able to break away from the Atlantic System and the EU’s impositions. Today, the process has pushed him towards policies of the extreme right. There was unrest in the country, and its reason was the Muslims. The scapegoat was found.

Does the global capital and the French deep state, which supports Macron’s reelection, has its fingers in the generals’ initiative? There are quite a few who defends this thesis, which is actually worth a consideration.

But the media leads a strong control of perception. The propaganda says that Marine Le Pen, her Party of National Union and other parties and groups of the extreme right are behind the event of publishing the extreme right generals’ letter in the magazine Valeurs Actuelles. Le Pen’s positioning evidently also contributed to this perception. And this was the desired end.

But is this the truth? How did the Macron government, Marine le Pen and other parties evaluate this development?