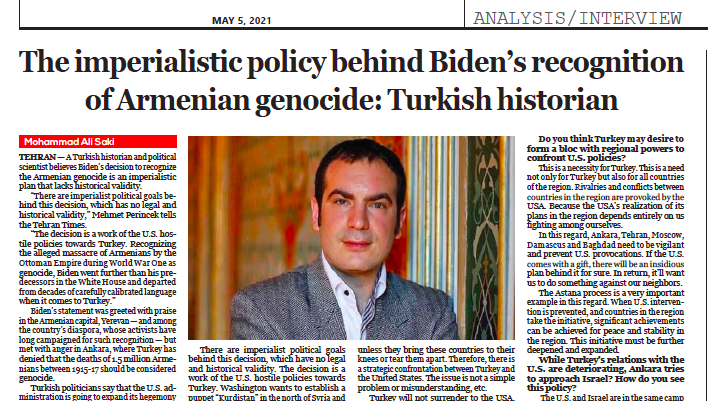 United World International expert Dr. Mehmet Perinçek gave an interview to the Iranian Tehran Times about claims of the so-called Armenian genocide and the political projects they serve.

Below we document the interview, conducted by Mohammad Ali Saki, as printed in the Tehran Times on May 5th, 2021. Subheadings were set by UWI.

Tehran – A Turkish historian and political scientist believes Biden’s decision to recognize the Armenian genocide is an imperialistic plan that lacks historical validity.

“There are imperialist political goals behind this decision, which has no legal and historical validity,” Mehmet Perincek tells the Tehran Times. “The decision is a work of the U.S. hostile policies towards Turkey.

Recognizing the alleged massacre of Armenians by the Ottoman Empire during World War One as genocide, Biden went further than his predecessors in the White House and departed from decades of carefully calibrated language when it comes to Turkey.”

Biden’s statement was greeted with praise in the Armenian capital, Yerevan — and among the country’s diaspora, whose activists have long campaigned for such recognition — but met with anger in Ankara, where Turkey has denied that the deaths of 1.5 million Armenians between 1915-17 should be considered genocide.

Turkish politicians say that the U.S. administration is going to expand its hegemony through meddling in the region. “Washington wants to establish a puppet “Kurdistan” in the north of Syria and Iraq,” Perincek emphasizes.

What is your comment on Biden’s recognition of the so-called Armenian genocide?

Biden’s statement has no meaning in terms of international law. According to the international convention of 1948, only local courts or international criminal courts can decree genocide. Therefore, it is not possible to talk about any genocide without a court decision. Biden has no such authority.

Biden’s statements are also incompatible with historical facts. I have been researching this topic in the Russian state archives for over 20 years. My books on this subject were published in Iran as well. Documents from the archive prove that the imperialist states provoked a mutual massacre in order to share Turkey, while Turkey made self-defense.

There are imperialist political goals behind this decision, which have no legal and historical validity. The decision is a work of the U.S. hostile policies towards Turkey. Washington wants to establish a puppet “Kurdistan” in the north of Syria and Iraq. Besides, it has formed a bloc against Turkey in the Eastern Mediterranean. It is making stacks in Western Thrace and the Aegean and trying to surround Turkey. In this picture, Biden’s statement has meaning. Allegations of the so-called Armenian genocide have been part of plans to share Turkey since time immemorial. Today, there is the same purpose. This plan was made through the “Great Armenia project” in the past; today, it is tried to be realized through the “Great Kurdistan project.” As a matter of fact, Turkey’s fight against terrorism is also wanted to be shown as a crime against humanity.

Many predict deterioration of relations between Turkey and the U.S. under Biden’s presidency. What is the reason?

Countries with deep-rooted state traditions, such as Turkey, Iran, Russia, China, are the biggest obstacle to U.S. plans. The United States cannot carry out its own strategy unless they bring these countries to their knees or tear them apart. Therefore, there is a strategic confrontation between Turkey and the United States. The issue is not a simple problem or misunderstanding, etc.

“Turkey will not surrender to the USA”

Turkey will not surrender to the USA. Bilateral relations cannot improve until the USA respects Turkey’s territorial integrity and sovereignty. The problem originates from U.S. imperialist plans for Turkey and the region. Biden has also shown that he will continue these plans by exacerbating them.

How can Turkey balance its ties with Russia and the U.S.?

The United States is strategically positioned against Turkey. Russia, on the other hand, is facing the U.S. threat just like Turkey and has common interests with Turkey in the region. Therefore, Moscow is one of Ankara’s most important strategic allies in the region. Turkey can only eliminate the U.S. threat to itself in cooperation with countries such as Russia and Iran.
So Ankara’s need is not to maintain a balance between Moscow and Washington. All she has to do is develop a strategy with Moscow, Tehran, Damascus, and Baghdad that will stop U.S. plans together.

“All Turkey has to do is develop a strategy with Moscow, Tehran, Damascus, and Baghdad that will stop U.S. plans together”

Do you think Turkey may desire to form a bloc with regional powers to confront U.S. policies?

In this regard, Ankara, Tehran, Moscow, Damascus and Baghdad need to be vigilant and prevent U.S. provocations. If the U.S. comes with a gift, there will be an insidious plan behind it for sure. In return, it’ll want us to do something against our neighbors.

The Astana process is a very important example in this regard. When U.S. intervention is prevented, and countries in the region take the initiative, significant achievements can be achieved for peace and stability in the region. This initiative must be further deepened and expanded.

While Turkey’s relations with the U.S. are deteriorating, Ankara tries to approach Israel? How do you see this policy?

The U.S. and Israel are in the same camp and have a common strategy. Both countries are a threat to Turkey’s national security and regional peace. In this respect, it is not possible for Turkey to get closer to Israel while it is falling apart with the U.S.

“Israel, first of all, must stop supporting the ‘Kurdistan'”

In order for Turkey-Israel relations to normalize, Israel, first of all, must stop supporting the “Kurdistan” plan and the terrorist organizations PKK/PYD. Today, the biggest supporters of the PKK/PYD are the USA and Israel. Today, the Turkish army is fighting against the Israeli plan both in Syria and in the Eastern Mediterranean.

On the other hand, the normalization of relations between Israel and countries such as the United Arab Emirates is targeting Turkey as well. These agreements aim to press Turkey in the Eastern Mediterranean and the Middle East (West Asia). It’s part of a plan to isolate Turkey.

In this regard, Turkey and Iran should also come together and cooperate against the Israel threat.